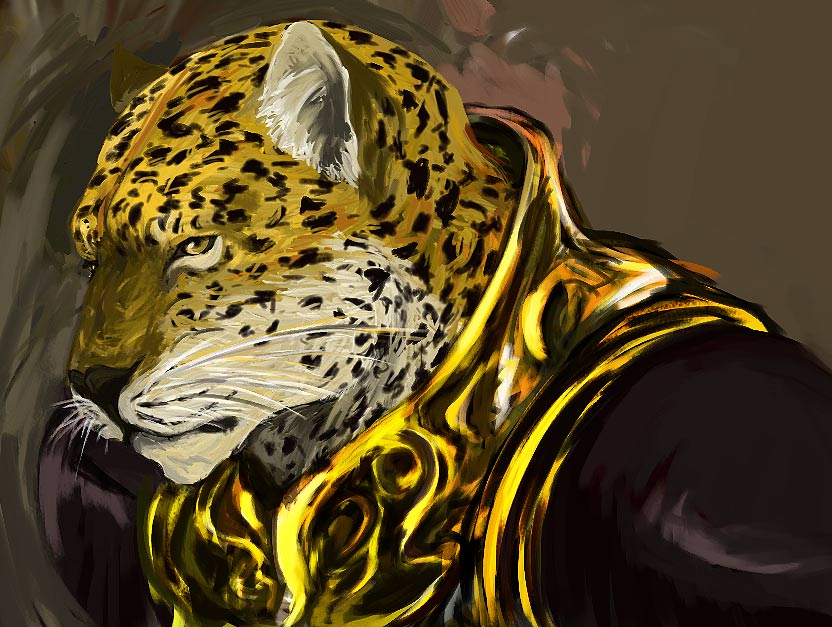 A Pantheren that closely resembles the Jaguar. Image supplied by Colcho.

The Pantheren aren't a trusting race and prefer to be alone than have another "cramp their style". While hunting they use stealth, this may account for their solitary nature. Males don't have much interaction with other Pantheren and females only interact with their children who live with them until they can survive for themselves and then go on their own path.

There are no Pantheren cities or other places of congregation. This makes Pantheren history hard to obtain and also means that each Pantheren may have very different experiences and personalities. The Pantheren culture means that the males must compete to mate, they must prove their worth to the female.

Males are more hostile and territorial than females. A male will defend his home or territory to the death and it is common to find two males fighting over hunting grounds or even the table at the local tavern. When Pantheren encounter each other for the first time while hunting (or any other place where they are competing for the same prize), they usually hiss and spit at each other which may escalate to a fight.

When moving homes or travelling through towns there can be some conflict with the Pantheren that are already inhabiting the town, this can cause damage to each other, their parties or local establishments. Females don't have as many physical fights, when they see another female Pantheren they usually avoid them, though if forced to work together or be otherwise unable to avoid the other, they may get aggressive and fight the other.

They usually eat meat and may eat it raw, they can digest it just as well and it tastes about the same for them. Most Pantheren are entirely carnivorous and some have never eaten cooked meat.

Pantheren are only slightly shorter than humans, they also weigh slightly less. They have a tough build though it is also very steam lined and smooth. Their skin is covered in fur which comes in a variety of colors including black, white and tan. They may also be spotted, stripped or have small sections of either. Their skin and fur are the same color and each fur hair is very short, a few millimeters at most.

Even though Pantheren are hostile and competitive between themselves they tend to get along well with other races. Individual Pantheren may hold grudges against races and from their experiences may treat each race differently.

Though they aren't hostile towards other races they still don't trust them. If a Pantheren trusts an individual it is usually because its life was saved or it was cared for by the person from a young age. Pantheren may trust a race if they grew up with a caring family of that race.

Pantheren can sometimes be prejudiced for another's actions the person that prejudices the Pantheren may think that you are the same one or may have a prejudice against the Pantheren race. The personality and conflict between Pantheren may also cause people of other races to think negatively of them, though people learn quickly that they aren't hostile, just competitive.

Pantheren can tend to be chaotic because they are solitary though if they were raised in a community they can be lawful. Each Pantheren has individual experiences that effect their alignment which allows them to be of any alignment.

Solitary Pantheren may live in the wild, either in forests or in mountainous areas, or they may live in a small town though it is not common for their to be more than one in each town. When living in the wild they may be completely independent, hunting animals for food and killing travelers for equipment. Pantheren in the wild can go crazy and savage, most cannot join society again and some forget proper etiquette and speech.

If a Pantheren has grown to be with a society they can be in larger towns, from medium towns to capitals, they may also be in military associations that cause them to move around and be in close quarters with others. Pantheren in a society can live in a wider range of climates than those without access to the technology that is supplied to townsfolk, they may not be able to survive on the local animals or it may be too cold for them.

Pantheren don't have a group religion and most of them don't have any religious beliefs, those that do worship either the deity that relates to their alignment, location or race they were raised by. Each Pantheren is individual and have unique beliefs, their beliefs can cause more conflict between each other though it doesn't usually cause much more conflict. Pantheren that worship a deity may be hostile towards worshipers of others, though not usually as hostile as if it were another Pantheren.

Pantheren can get their names from a wide variety of places, be it their mother, their raiser, or a discovery of what they think their name should be. If they were given a name by their mother then they will usually have a more feline name, hard to pronounce by someone that cannot speak felines. If given by a raiser it would be close to the normal from the race that the raiser is. If they discover it themselves it may be any name, though it is largely influenced by their path and their surroundings.