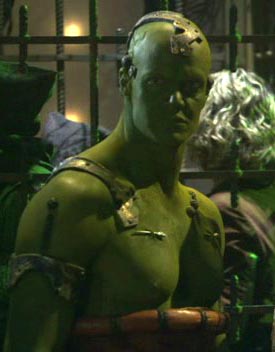 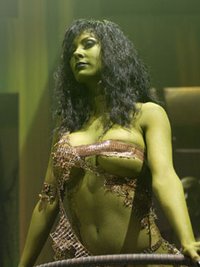 A female Orion being sold as a slave.

Orions are a race of dual nature. Orion males are large, strong, brutish, and simple; conversely, orion females are submissive, sensual, and devious. In Orion society the males are slaves to the females. As a means of deception to other species, however, the Orions maintain the façade that the females are the slaves. This is commonly done by selling Orion females on the Orion slave market.

Orions are known for their distinctive green or blue skin. Orion males are typically bald and, on average, taller and more muscular than an average Human male. Orion females are very animalistic in nature, known for their extreme carnal appetites and their innate skill of seduction. Male orions can be mistaken for particularly green orcs at a distance because of their large build while females are built more like particularly slight elves.

Orions maintain an open relationship with many crime syndicates and traffic in slaves. This makes lawful and good societies dislike orions.

Often Chaotic or Evil, rarely both. Orions tend to be either freedom-fighters or greedy slave traders, but their dual nature prevents them from doing both at once.

Orions usually steal names from Elvish or Vulcan for their children.