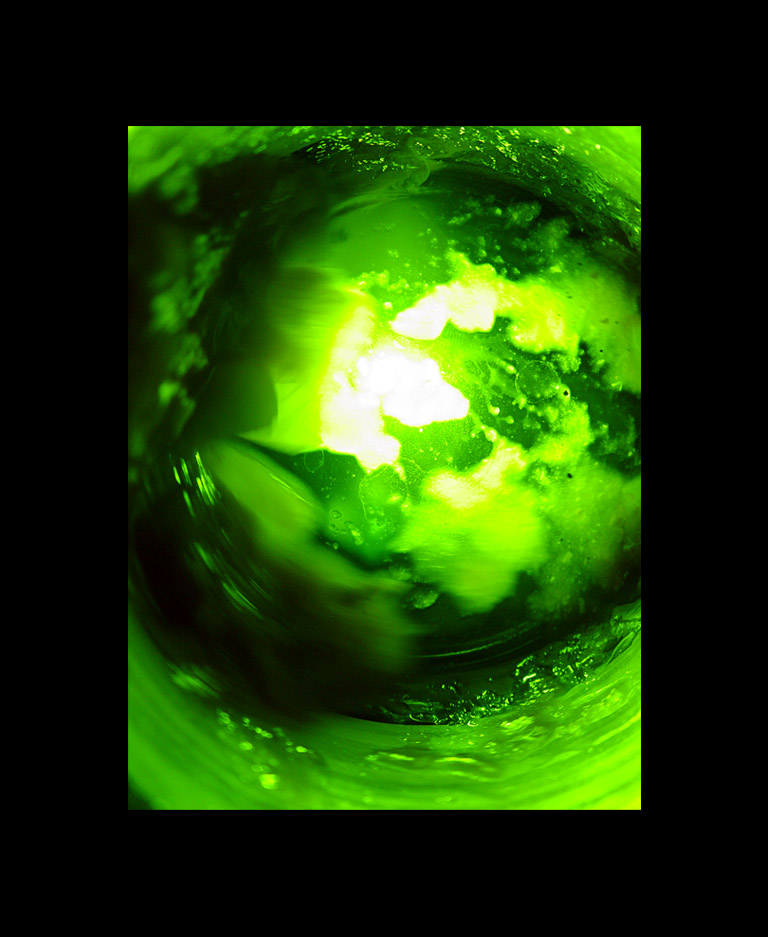 The brain of an opalogene.

The air was still and cold, and the group of people who had ventured so far into this network of caves had slowed their pace, growing wary of the world around them. It felt, as they ventured through the snaking tunnels, that they weren't welcome there, that they were trespassing somewhere forbidden. As they stared forward into the pitch black darkness of the tunnels before them, they did not notice the crumbling of the stones beneath them. Then they were falling, and as they fell they saw before them a vast, glowing, pulsating orb of ooze, and questions flooded their minds. They stopped falling in midair before the green orb, as its thoughts seemed to look them over, as a child would an odd toy.

Opalogenes are incalculably ancient, primordial oozes who are often older than most gods. Unlike most oozes, opalogenes are actually capable of active thought, but only on a much larger scale than most creatures, seeing as they are made up of 2 distinct parts, a single, vast, perfect orb of ooze which operates similarly to a gargantuan brain cell, otherwise known as the opalogene's brain, and a swarm of billions upon billions of tiny amoeba like oozes which travel in swarms throughout the tunnels of the world, which are referred to as the nerves of an opalogene. The brain of an opalogene actually creates these nerves through a process similar to meiosis, sending them out throughout the world. These amoeba always leave a thick layer of psionic slime behind them wherever they go. This slime always leads back to the brain of the opalogene, and acts as a sort of "body" for the ooze, seeing as the opalogene can send its thoughts down through this slime, and feel it and everything thing it touches as though it were part of itself. Due to this manner in which they "grow", opalogenes never stop getting bigger, and have even been known to span continent-sized networks of tunnels in the past. Opalogenes are often referred to as the single wisest beings in existence by those who have actually experienced the privilege of being in direct mental contact with one of them, but due to the fact of their unique mind and ways of thinking, they are incapable of imparting their wisdom to another, non-psionic being. The death of an opalogene is most often actually the death of its brain, seeing as its nerves can die indefinitely and not harm the overall consciousness of the entity. When a oplaogene does in fact die and its mind ceases to exist, it seems to heave a final, great psychic sigh, which quickly blossoms out throughout the cosmos, brushing through the minds of all conscious entities within existence. If this is ever to happen, everything that can think at the time of the opalogene's death seem to feel as though the world has been diminished somehow, though they are not sure how.

Opalogenes do not actively seek combat, but considering the way their comprehension of the world differs from other beings, they may inadvertently attack something as their nerves continue to grow and spread throughout the world. The opalogene does not have total control of its nerves, and they may begin to become a problem for cave dwelling societies. While this is true, if a being comes into contact with the brain of an opalogene, and appeals to it to stop its growth, the opalogene may attempt to do so, if it can understand the problem its visitor has. The brain of an opalogene will never consciously attack something that it can sense does not mean it harm.

The brain of an opalogene's slam attacks are treated as epic and psionic for the purpose of overcoming damage reduction.

Collective Mind (Ex): The nerves of an opalogene trail a layer of thick, transparent ooze behind them wherever they go. All parts of the opalogene that are in contact with this ooze are in constant communication. If the brain of the opalogene is aware of a particular danger, all parts of the opalogene are. If one of the nerves of a opalogene is killed, the brain is aware of it, though other nerves may not be. If a being capable of manifesting psionic powers touches this ooze with its bare flesh, it can "feel" through it as though it was a part of the opalogene itself, but only out through a distance of 20 feet per Manifester level along the ooze. The brain of the opalogene is also immediately aware of the being touching the ooze and can feel it as though it could any other piece of its body, the brain may attempt to make mental contact with any psionic being that is in contact with the ooze if it so wishes, as an extension of its telepathy (see below). If the brain of the opalogene dies then the collective mind changes, yet still exists as long as 10 or more of the opalogene's nerves still exist. If this event is to ever happen, then the overall mind of the opalogene becomes more instinctual, and the nerves begin travelling enmasse to the cavern or general area that the brain once occupied. If a being capable of manifesting psionic powers touches the ooze that connects all parts of the opalogene together with its bare skin while the opalogene is in this state, the distance it can "feel" through the ooze increases to 50 feet per Manifester level. Additionally, no part of the opalogene may attempt to contact that being. Once 10 or more of the opalogene's nerves have entered the area that the brain died in, they climb over each other to form an orb 20 ft. in diameter, and begin to digest each other, beginning to create a new brain. Refer to Table: Opalogene Brain Regrowth Time to determine how long it takes them to form a new brain. This embryonic brain is treated as being catatonic and is incapable of taking any actions, conversing with anything, or creating more nerves until the duration shown in Table: Opalogene Brain Regrowth Time is up, at which point the brain regains any memories the original brain had, and is treated as never having died.

Distraction (Ex): Any living creature vulnerable to a swarm’s damage that begins its turn with a swarm in its square is nauseated for 1 round; a DC 19 fortitude save negates the effect. Even with a successful save, spellcasting or concentrating on spells within the area of a swarm requires a Concentration check (DC 20 + spell level). Using skills requiring patience and concentration requires a Concentration check (DC 20). The save DC is Constitution-based.

Ooze Traits: An ooze is an amorphous or mutable creature. Oozes are immune to poison, sleep, paralysis, stunning, and polymorphing. They have no clear front or back and are therefore not subject to critical hits or flanking. Oozes are blind but have the Blindsight special quality. If an Ooze has no Intelligence score they are immune to all mind-affecting effects (charms, compulsions, phantasms, patterns, and morale effects).

Powers: The brain of an Opalogene can manifest psionic powers as a 24th level psion of any discipline, except that the brain uses its Wisdom modifier instead of its Intelligence modifier for the purpose of determining saving throw DCs and bonus power points.

Spider Climb (Ex): The nerve of an opalogene can climb on any solid surface as though under the effects of spider climb spell

Swarm Traits: A swarm has no clear front or back and no discernable anatomy, so it is not subject to critical hits or flanking. A swarm made up of Tiny creatures takes half damage from slashing and piercing weapons.

Reducing a swarm to 0 hit points or fewer usually causes the swarm to break up, though damage taken until that point does not degrade its ability to attack or resist attack. Swarms are never staggered or reduced to a dying state by damage. Also, they cannot be tripped, grappled, or bull rushed, and they cannot grapple another.

A swarm is immune to any spell or effect that targets a specific number of creatures (including single-target spells such as disintegrate), with the exception of mind-affecting effects if the swarm has an intelligence score and a hive mind. A swarm takes a –10 penalty on saving throws against spells or effects that affect an area, such as many evocation spells or grenadelike weapons. If the area effect attack does not allow a saving throw, the swarm takes double damage instead.

Usually a swarm rendered unconscious by means of nonlethal damage becomes disorganized and dispersed, and does not re-form until its hit points exceed its nonlethal damage.

Telepathy: The brain of a opalogene can communicate telepathically with any other creature within a 250 feet. This is not affected by the possession of a language, seeing as the brain has no comprehension of language and therefore communicates in the form of emotions and concepts. It is possible for the brain to address multiple creatures at once telepathically, seeing as the brain doesn't have to focus on forming words.