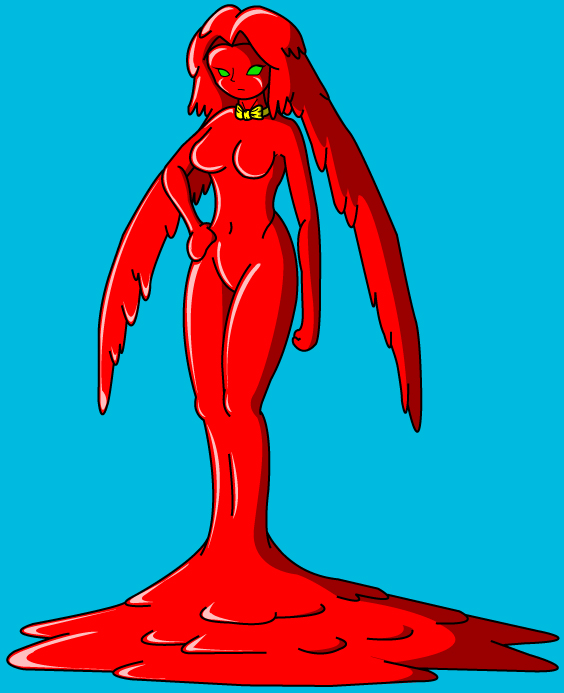 Dripping out of walls, posing hazards in dungeons, barely alive and barely aware, little more than animated piles of toxic waste. Why would anyone want to follow the (lack of) footsteps of an ooze? Well, those who actively become oozes are rarely of stable mind. Be it by some strange disease or by sheer force of will, the oozebound's body breaks down and turns into something without shape or form.

Special: Must have at least 50 Hit Points

All the following are class features of the Oozebound:

Weapon and Armor Proficiency: Oozebound gain no proficiency with any weapon or armor.

Ooze Resistances (Ex): The slimy transformation begins with the body's organs becoming much more flexible and resistant. The oozebound adds their class level as a bonus to the following: Saves against mind-affecting effects, poison, sleep, paralysis, polymorph, and stunning.

Slime Layer (Ex): The oozebound is coated in a layer of acidic slime, whenever a creature successfully strikes the oozebound with an unarmed melee attack or natural attack, the attacker suffers 1d6 acid damage, also her natural weapons deal this extra damage.

Melting Touch (Su): The oozebound can make touch attacks to deal acid damage equal to their Con modifier plus 1d6 for every odd class level. Creatures struck by melting touch must make a Fortitude save DC 10 + 1/2 class level + Constitution modifier, or be paralysed for 1 round. The save DC is Constitution-based.

Mitosis (Su): At level 2, as a standard action, the oozebound can divide in two blobs. Each blob is one size category smaller than the original. Each has half the hit points and the base attack bonus of the original (divide health and attack using integers). Those blobs can also divide again as a standard action, down to a minimum size of diminutive. Even though the blobs are considered separate physical entities, only one can cast a spell a round. The blobs can communicate to each other telepathically. Multiple blobs can join back together as a standard action if they are adjacent to each other. If a blob dies, it explodes, dealing acid damage equal to its melting touch to all adjacent creatures. If an oozebound had blobs die, he can regain his body mass by rejoining with all remaining blobs and sleeping for eight hours, this gives him back his original size, his full attack bonus, and his maximum hit points (it does not actually heal him). Only 4 blobs can exist at a time.

Aweful Visage: An Oozebound's appearance becomes repulsive. As their bodily organs mush into one single amorphous being, they lose touch with reality and their social skills suffer. The Oozebound gains a bonus on Intimidate and Disguise skill checks equal to 1/2 class level (rounded down). Bluff, Diplomacy, Gather Information, Perform and all other Charisma based skill checks take the penalty equal to -1/2 class level (rounded down), but the oozebound's charisma score functions normally otherwise (for spell DCs, spells per day, and more).

Fortification (Ex): As the oozebound's organs begin to melt into a single bizarre organ, they become difficult to strike in a vital spot. At 2nd level they gain light fortification (25%), which increases to medium (50%) at 5th level and heavy (75%) at 8th. At level 10, they will become immune to critical strikes.

Putty Face (Su): At 2nd level, the oozebound learns to manipulate his facial features, gaining a competence bonus equal to his oozebound level on Disguise checks. However, for each hour the oozebound tries to hold this form after the first, the class bonus decreases by 2.

Blindsight (Ex): The oozebound gains Blindsight 15ft at level 4. At 7th level it extends to 30 ft.

Malleability (Su): At level 6 the oozebound can break down at will. He may melt and compress his body enough to squeeze through an inch wide crack. He cannot expand inside a space that offers any resistance, such as an occupied suit of armor. Likewise this grants +10 to escape a grapple.

Sticky Grip (Su): At 8th level an Oozebound body can adhere to walls and ceilings. They are under a constant Spiderclimb effect, with a caster level equal to their character level.

Extended Reach (Su): At 9th level an Oozebound controls his form in detail. Even while in human form, the oozebound may increase their reach by 5 ft, using their amorphous limbs to attack from afar.

Ooze Apotheosis: At level 10 the oozebound's gooey transformation into an amorphous puddle of organic goo is complete. The ooze form is now his natural form, though he can assume any humanoid form of Medium size or smaller as a standard action three times per day. The oozebound can remain in its humanoid form until it chooses to assume a new one or return to its natural form.

Engulf (Ex): An oozebound can engulf creatures the same size or smaller than itself as a standard action. He cannot make an attack during a round in which it engulfs. The oozebound merely has to move over the opponents, affecting as many as it can cover. Opponents can make opportunity attacks against the oozebound, but if they do so they are not entitled to a saving throw. Those who do not attempt attacks of opportunity must succeed on a Reflex save (DC 10 + 1/2 class level + strength modifier) or be engulfed; on a success, they are pushed back or aside (opponent’s choice) as the cube moves forward. Engulfed creatures suffer Melting Touch, begin to suffocate, and are considered to be grappled and trapped within its body. Each round on your turn, each engulfed creature takes Melting Touch damage. An engulfed creature can break out with a Strength check or Escape Artist check, DC (10 + 1/2 HD + Con) for both. This deals the oozebound damage equal to the amount the DC is exceeded.

All the following are class features of the Epic Oozebound'

Melting Touch (Su): The oozebound's acid damage continues to rise for every 3 levels of Oozebound, starting at level 21.

Damage Reduction: The oozebound's damage reduction continues to rise for every 3 levels of Oozebound, starting at level 22.