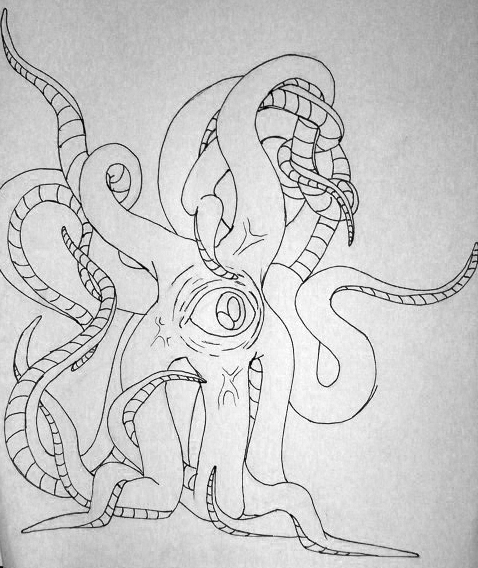 I have more eyes than you realize, flatlander.Image by Bunnie

"Our tentacles cross time and space, we all travel to the Great Eye at center, and once there then all shall see true."

Om see things beyond normal mortal eyes. Though lacking mouth and thus "taste", Om are given other senses impossible to explain to those stuck in this frame. Because this unique perspective, Om possess a unique connection and viewpoint, many come off as distant or out of touch mystics. However, this is more an effect of their actual physical place than their moods. As an Om would tell you, Oms vary in range, emotion, and motive as much as humanity.

The Om are most mysterious. Outwardly they seem to be giant octopi, possessing eight tentacles, thick rubbery hide, and a single large eye in the center of their body. Their colors vary like a rainbow, and they move by slowly ambulating on their tentacles (and later, through psionic flight). However, they lack many parts of living beings, including a mouth. In fact, an Om consumes not food, but psionic energies through their eye, and it is processed in ways beyond comprehension. They breath through a series of gill slots in the back of their "head", and this is the only aperture they possess.

By the Oms account, while they are not offended by the octopus comparison, they are puzzled at "the lack of sensory organs to see the Oms rest". To Oms, their physical forms is only a small part of a bigger truth. Also aiding in the idea that Oms are extradimensional creatures comes into play on the subject of reproduction. A rare event, and one poorly described by the non-talkative Om, it is known as children will seem to "bloom" into existence out of thin air 7 months nearby the parents, an activity the Om refer to as their children "finding the surface". On that subject, it's uncertain if Oms possess gender, the Oms aren't telling.

Because the Om seem distant, they tend to be peaceful with all they encounter, good or evil. Their pacifism sometimes gets them in trouble. When it is impossible for them to make peace, or simply be unbothered, they become devious schemers, preferring less open warfare and more slow, complicated downfalls through intricate plots that would give the greatest schemers headaches to think of.

Many Oms come off as neutral, if only because of their passive natures, but in truth an Om can be of any alignment easily.

Om are not of this world, they come from a strange distant sphere hidden in the depths of the astral sea. The world is hard to find... some say it is hidden under a constant psychic storm, others say that the storms move it around at strange times. The only certain thing is that the psychic storms are indeed related to them in some unknown fashion, and may be responsible for their creation.

The Om are not terribly religious, though they have the mindset for it. However, they tend to see gods as part of a larger whole, and do not devote themselves often, devoting themselves more to "the cause of good", "the concept of entropy", and other vague, broad terms.

The Om speak in a telepathic language which when "heard" by other come off as the sensation of colors and strange echoes, called Om. They also speak Common when found on the material plane. Their limited telepathy does not allow them to bypass language barriers, but does bypass a silence field. They can also do extremely limited vocalization by vibrating their gills, producing a buzzing noise, which substitutes vocal components in casting.

The Om have a true Om name which cannot be translated into common, and a common name which is generally given to them by others, if the Om happens to like the sound of it or it possesses special meaning. They tend to vowels, and names which can be "sung" well.