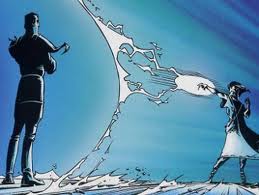 A Null Mage, with an active Null Zone.

Null Mages are the pinnacle of Mage destroying. They at birth are chosen to be infused with a Null Magic Zone, even to this day only the masters of this technique know how it's done. Null mages though sometimes aren't happy that they have been infused with such a thing; some might want to learn magic and use magic items but because of their parents they must persevere. Null Mages range from strong haters of magic to people who live with the fact that magic doesn't work on them. None of them though can deny the fact that no mage wants to be around them once they figure out their powers.

Null Mages are great at fighting Mages, Clerics, and Psions but usually don't get along with others that try and use it around him. He usually will assess whether the target is a caster or not and when he does he will activate his null magic aura and attack them, if others cast magic in the party and are more useful casting then he will leave it off.

Abilities: Wisdom is the most important stat because it determines how many times at the right level of course you can use your null magic Zone.

Races: Any race can become a Null Mage, the most common though are Humans. Elves, Gnomes and Halfings usually never become Null Mages due to their magical heritage.

Weapon and Armor Proficiency: Null Mages are proficient with all Light and Medium Armor, all shields, (Excluding Tower) as well as all simple and Martial weapons.

Magic Bane: Null Mages in every sense the bane of all magic, be it Arcane, Divine, or Psionic. Because of this and the nature of Null magic zones, a Null Mage may never obtain Class levels in Sorcerer, Wizard, Bard, Cleric, Druid, Paladin, or any other(Prestige)class that involves casting spells, making magic items, or things that are genreally magic base.

Immunity: Null Mages slowly but surely start to attune to their inner Null magic zone. At first level and every third level there after they become immune to a new level of spell. Starting at first they are immune to '0' level spells. This means that they cannot be affected in any way to that level of spell. This includes Arcane, Divine, or psionic.

Spell Resistance (SR): At first level and every fifth level thereafter the Null Mage is becoming more and more Resistant to magic. This Spell resistance acts like the normal spell Resistance as described in the Dungeon Master Guide. This Spell resistance though is always active and cannot be turned off in any battle or fighting condition. So for example if a Cleric wished to heal a Null Mage they must first make sure that the spell they cast is not of a level that they are immune to, and they must make a caster check just to make sure the spell doesn't fizzle. Otherwise the Null Mage has complete control of his Null Zone and can choose what magic affects him.

Resist Magic: A Null Mage can access some of their inner Null zone and resist magic he knows is targeting him. They can, a number of times a day equal to their Wis modifier + their Null Mage level, make an opposed spell caster check against a spell they knows is being cast on them or is aware that magic will target them. They must make a check of his Null Mage level + their Wis Modifier against the opponent's Caster level + Spell Level + (Int for Wizards, Cha for Sorcerer, etc....).

Null Zone: A null mage has learned to let some of his Null Zone out for short bursts of time. At fourth level a Null Mage can, for a number of minutes a day equal to his Null Mage level + his Wis Modifier, create a Null Zone. He can do this a number of times equal to half his level a day. The zone is 10ft wide and is centered around the Null Mage.

Null Magic Zone: At level 10 a Null Mage gets a 10ft aura and increases at 14th 18th and 20th level, to a maximum of 100ft. While this field is up any Magic, spell like ablilty or psionic power in the area is fully suppressed, and any magic that goes through the Null magic Zone is dispelled. This effects items that have magical properties as well reducing them to normal everyday items. Duration 1 minute per Null Mage level + Null Mage's Wis modifier. The Null Magic Zone can be applied so that it follows a person with a ranged touch attack, touch attack, or it can be a set location. If the Null Magic Zone is attached to anything other than the Null Mage, it instead lasts for a number of rounds equal to the Null Mage's level + Null Mage's Wis modifier.

Nullify: At 10th level, a Null mage learns to target active spells, and cancel them. As a Full Round Action, a Null Mage can target any spell currently in affect (Such as Wall of Stone, or Flaming Sphere) and dispel it. No dispel check is required on the Null Mage's part. The Null Mage can also use this to affect magical creatures, such as golems, but they get a Fortitude save (DC 15+Null Mage level + Wis Mod).

Suppress Magic: At 11th level, a Null Mage learns to suppress a caster's ability to use magic, or psionics. As an immediate action (meaning on the opponent's turn or the Null Mage's turn), a Null Mage can force a caster loose the spell they are casting. The caster must succeed a will save on each of his turns he continues focusing on the spell in order to continue casting (DC 15+Null Mage level + Wis Mod).

Banish Magic: At 20th level, a Null Mage learns the most powerfull nullification technique. The Null Mage targets a caster, and must succeed a ranged touch attack. If it succeeds, the Null Mage implants a small portion of his null zone into the enemy caster. This completely nullifies said caster's magical/psionic abilities. The Caster can no longer cast spells, use magic or psionic items, or be affected by magic. A Null Mage can only affect one creature at a time with this ability, and it only lasts a number of days equal to (Half the Null Mage's level+The Null Mage's Wis Mod).

Religion: Null Mages almost never worship Deities because of how anti-magical these people are. The gods themselves usually shun these beings and the Null Mages are fine with this because they are almost never helped when praying. Until a God of Anti- Magic is created/ Ascends they will remain mostly faithless.

Other Classes: This class gets along splendidly with fighters and Monks. Barbarians love them because most barbaric people view magic as evil and Null Mages therefore are almost pure good in there minds. Any fighter or Mage Hunter always try to have a Null Mage around to stop those pesky Casters. Casters though despise them with a fiery passion. A caster of any kind will almost always try to stay away from them because even touching a Null Mage to much can drain your magical abilities away.

Combat: Fighter/ Anti-Caster, a Null Mage will always asses what he is up against and go from there. It is almost unheard of to see a Null Mage charge head first into battle not knowing what he's up against. He himself can hold his own in combat, but is no where near as good as a Fighter or Barbarian. He is meant to find the caster, get in close to him, stop him from casting through his abilities then beat the now frail and squishy caster.

Advancement: Null Mages almost always become Fighters, they have the capability and are very good at becoming one. And all but a few Null Mages become Mage Hunters killing evil mages or just casters in general.

Null Mages in the World[edit]

Characters with ranks in Knowledge (Arcana) can research Null Mages to learn more about them. When a character makes a skill check, read or paraphrase the following, including information from lower DCs.

Null Mages in the Game[edit]