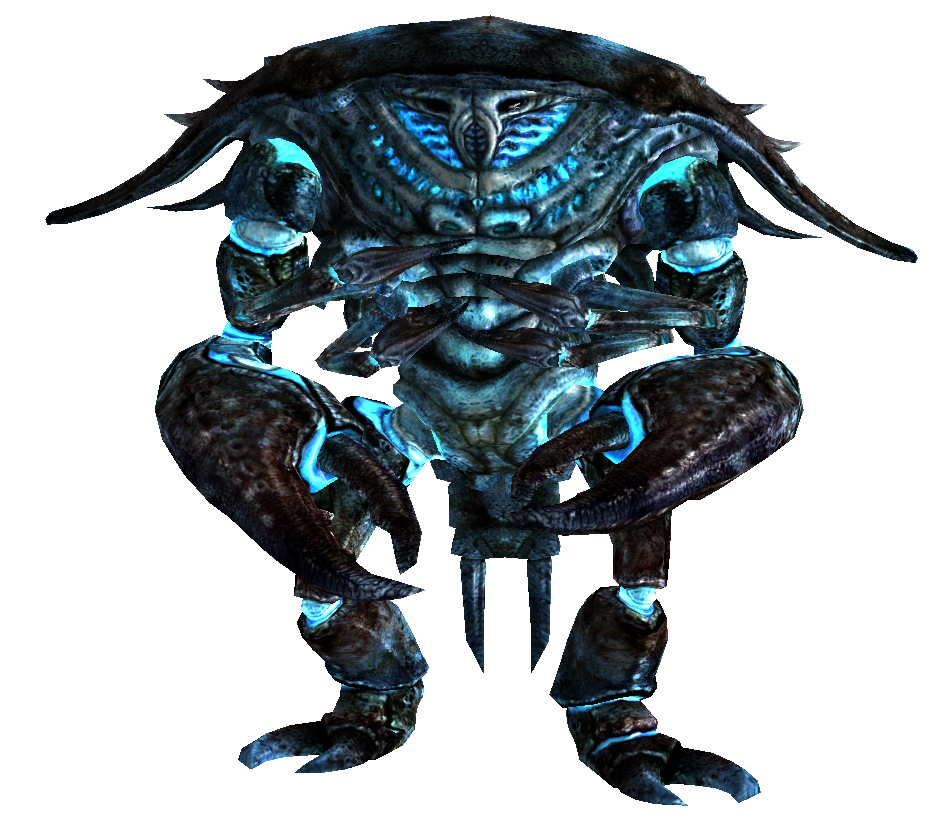 A weaker variant of the Mirelurk Hunter, Nukalurks are mildly radioactive and weaker than Hunters.

Nukalurks are mutated Mirelurks with a uniquely colored dark-blue exoskeleton with glowing blue strips along parts of their bodies, due to consumption of the radioactive isotope Strontium that was added to an experimental new version of Nuka-Cola known as Nuka-Cola Quantum shortly before the Great War.

Nukalurks, just like Mirelurks, make a loud, distinctive clicking noise, that can be heard when within 60 feet with a DC 10 Listen skill check.

Nukalurks in combat will first charge at their enemies, performing a bull rush to knock their opponents back, but this leaves them vulnerable to attacks as they raise their heads to regain their balance. In subsequent rounds, they will alternate between their claws and a bull rush. They also possess a thick shell that deflects even the most powerful weapons. They are very territorial, fighting all trespassers on sight to the death. Even if their target leaves, they will pursue the target until lost or dead. However, they are also protective of each other and will not hesitate to leave to help another Nukalurk in battle.

Thick Shell (Ex): Nukalurks take half damage from all non-energy weapons and cannot be Stunned or pushed back by the Bull Rush special attack. However, in the round after performing a bull rush, they take full damage from attacks while they regain their balance.

Headbutt (Ex): When a Nukalurk succeeds at a Bull Rush attempt, it deals 1d3+3 bludgeoning damage to the target, and the target must make a Balance check (DC 17) or be dazed for one round. In addition, Nukalurks gain a +4 species bonus to Strength checks when performing a Bull Rush (already factored into statistics).

Radioactive (Ex): Nukalurks are considered to be Lightly Radioactive Materials even after their death. In addition, the Strontium that poisoned them gives them a +4 species bonus to Initiative.