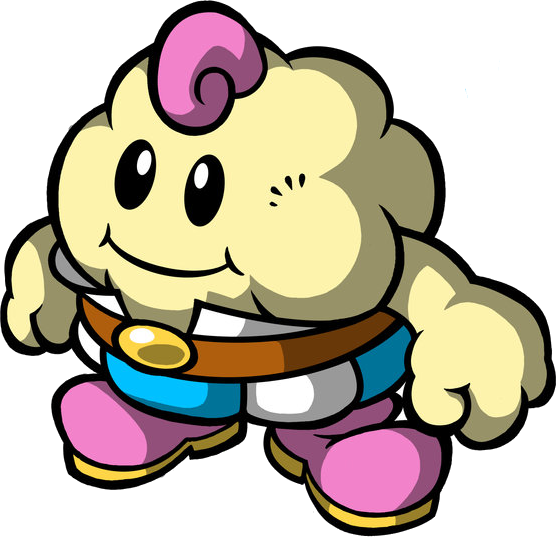 Float: Can hover about 1ft above the ground. Immune to falling damage.

Shy: Nimbus folk are very introverted and shy people. They tend to stick to themselves and only ever have a few very close friends. -2 Persuasion

Weapon Proficiency: Nimbus folk are not proficient with any standard weapons. However they tend to create combat sticks and magic cymbals when needed. Nimbus is the only species able to proficiently use these.

Class Defense: Nimbus folk have an A column Defense bonus.

Nimbus Weapons: Nimbus folk can conjure two weapons unique to their Class. First is the combat stick. This is a 2-handed bludgeoning stick that looks like a warbly staff. It does 1d8 damage. These can be imbued with magical abilities if a Nimbus finds an enchanter to do the work. The other Nimbus weapon is the magic cymbals. When a Nimbus claps these together, he/she can direct the intense sound waves to nearby targets. Does 1d6 force damage, range is 40ft. Unlike most ranged Weapons, magic cymbals add Int Mod instead of Dex Mod to Attack Bonus.

Bolt: Starting at level 2, Nimbus Folk are able to shoot a bolt of magical energy from their fingertips. They can only shoot a limited # of bolts per day(see table) + their Int Mod. A Bolt does 1d4+1 damage and strikes its target unerringly even if they're in melee. Bolts cannot strike targets that have total cover or concealment. Bolts have a range of 100ft + 10ft for every +point of Int Mod. A Nimbus' Bolt ability upgrades every other level.

4th level: Can now shoot three Bolts at once. They can be directed at different targets if so desired. Can only target #of targets = Int Mod.

6th level: Can now shoot five Bolts at once. Also can add elemental effects to a Bolt. 1d6 fire, cold, or shock damage. Can only shoot an elemental bolt number of times per day = Int Mod.

8th level: Can now shoot seven bolts at once.

10th level: Can now shoot 9 bolts at once. Nimbus have become so well practiced at firing Bolts they can now aim them at critical points on a target making the damage more insightful. Add Int Mod to each bolt's damage.

14th level: Can now shoot 13 bolts at once. Elemental bolts leave lingering effects. Fire bolts burn targets doing 1d6 damage for 3 turns after the attack, Fort save negates burn. Cold Bolts slow targets for the next 3 turns causing them to move at half speed, Will save negates slowing. Shock bolts surprise the target causing them to drop any held weapons, Reflex save negates the drop.

18th level: Can now shoot 17 bolts at once. Bolts are now homing. They can bend around corners, duck under cover or dodge some concealment. They will hit a target even under total cover and concealment if possible.

Wis Mod Effects: A Nimbus' Wis Mod is added to his/her healing magic affects and other factors in their shroom magic. For example, Chino has a Wis Mod of +3 and casts Healing Rain. The healing effect will be 1d4+3. See spell Descriptions for further information.

3rd level: mp cost = 8: Thunder Clap - 1d8 Sonic Damage to all within 15ft radius of Nimbus, Fort save halves damage. Gust - emits a strong wind in a 45 ft cone, all in it's path are knocked backed to the end of the gust, Fort save negates, if knocked back must make Reflex save or also knocked prone.

10th level: mp cost = 30 Thunder Storm - 4d8 sonic damage and Silence for 1 turn to all within 30ft radius of Nimbus, Fort save halves damage and negates Silence. Whirlwind - emits a strong biting wind in a 45 ft cone that kicks up dirt and debris, all in it's path are knocked backed to the end of the whirlwind and are partially blinded for a turn (50% miss chance), Fort save negates knock back, Reflex save negates blinding, if knocked back and failed Reflex save, also knocked prone.

20th level: mp cost = 90 Thor's Hammer Strike - 12d8 sonic damage, Silence for 3 turns to all within 30t radius of Nimbus, Fort save halves damage and negates Silence. Aiolus - emits a 50'x50' wall of storm wind that lasts # of rounds = to Wis Mod, any that come within 10ft of the wall are instantly knocked back 50ft with extreme force and take falling damage as if they fell 50ft, Fort save halves knock back, reflex save prevents being knocked prone.

Familiar Basics: Use the basic statistics for a creature of the familiar’s kind, but make the following changes:

Hit Dice: For the purpose of effects related to number of Hit Dice, use the master’s character level or the familiar’s normal HD total, whichever is higher.

Hit Points: The familiar has one-half the master’s total hit points (not including temporary hit points), rounded down, regardless of its actual Hit Dice.

Saving Throws: For each saving throw, use either the familiar’s base save bonus (Fortitude +2, Reflex +2, Will +0) or the master’s (as calculated from all his classes), whichever is better. The familiar uses its own ability modifiers to saves, and it doesn’t share any of the other bonuses that the master might have on saves.

Available Familiars: All Nimbuses start with only a Flame as a familiar. But as they level more choices become available.

Share Spells: At the master’s option, he may have any spell (but not any spell-like ability) he casts on himself also affect his familiar. The familiar must be within 5 feet at the time of casting to receive the benefit. If the spell or effect has a duration other than instantaneous, it stops affecting the familiar if it moves farther than 5 feet away and will not affect the familiar again even if it returns to the master before the duration expires. Additionally, the master may cast a spell with a target of “You” on his familiar (as a touch range spell) instead of on himself. A master and his familiar can share spells even if the spells normally do not affect creatures of the familiar’s type (magical beast).

Empathic Link: The master has an empathic link with his familiar out to a distance of up to 1 mile. The master cannot see through the familiar’s eyes, but they can communicate empathically. Because of the limited nature of the link, only general emotional content can be communicated. Because of this empathic link, the master has the same connection to an item or place that his familiar does.

Speak with Master: If the master is 5th level or higher, a familiar and the master can communicate verbally as if they were using a common language. Other creatures do not understand the communication without magical help.

Scry on Familiar: If the master is 13th level or higher, he may scry on his familiar once per day.