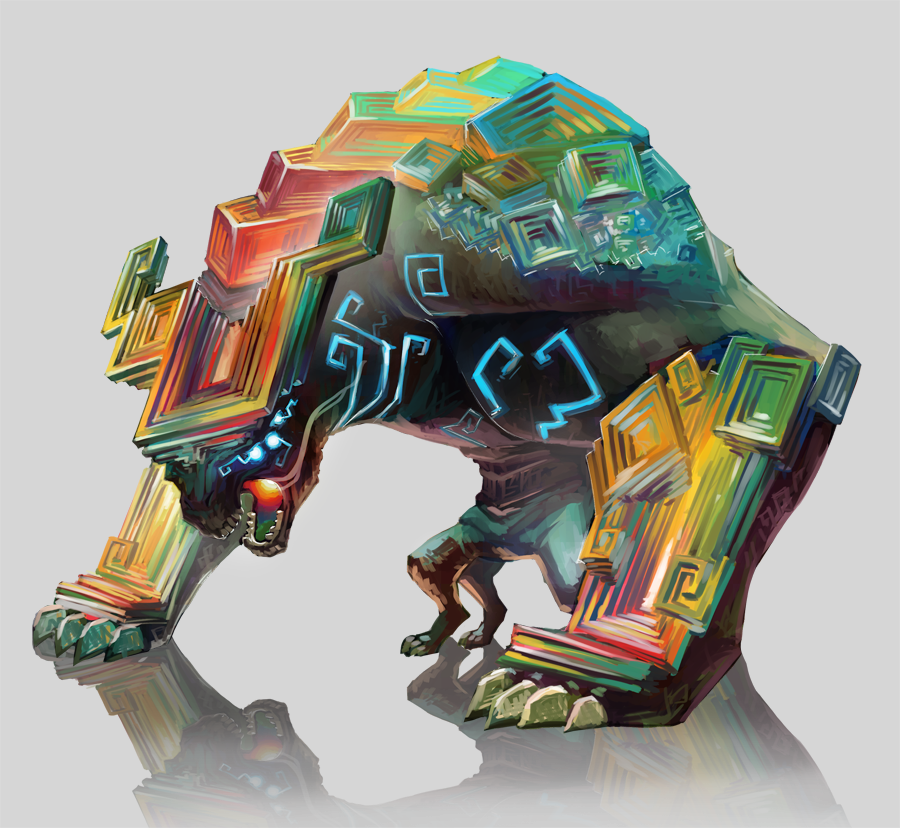 A terrifying behemoth of psionic might, the sight of a Nezna Beast is enough to shake even the hardiest of souls.

Suddenly, the sound of a raging stampede can be heard coming quickly from down the tunnel, as if some number of creatures have been disturbed and are rushing towards the exit. As the sound grows closer, the vibration of heavy plods get stronger, causing you to grip the hilt of your weapon amid a mixture of fear and anticipation... before it is upon you. A massive hulking creature, crowned in a mineral-like headdress of dull, earthen rainbows, comes barreling through the darkness, loosing a fell roar as it charges and smashes into your allies, tossing them aside violently. As you try to flank the creature and provide relief, it freezes you with a glare of its bright, white eyes, seemingly sparking with power, before a terrible pain wracks your mind.

Sometimes called Labyrinth Horrors or Crystal Dwellers, the hulking, angular-armored beast of the dark caverns is spoken of in whispers.

Few survive the horrors of the dreaded monstrosity known as the Nezna Beast, and fewer still recall their encounters. Named after a mine that became overrun with the foul creature, it strikes fear in the heart of all who venture below and remains an uncommon but terrifying problem in underground terrain. The six-legged creature stands at an imposing 12' to 15' feet when mature, resembling some twisted fusion of a ram and an ape. It's forelegs, back and head are covered in a mineral resembling bismuth in hopper crystal formations, providing a heavy layer of defense over most of its body, and a intimidating crest upon its forehead. The mineral surface shines a palette of earthen, almost metallic colors, leaving the pale gray skin on the rest of the beast to stand out less, were it not for the powerful energies surging through the body. It's six eyes are almost always overflowing with psionic energies. The Nezna Beast's anatomy does not resemble any known life form, as it bears no internal organs within its body other than its stone-filled gizzard - some scholars and great wizards believe it motivates its powerful bone, muscular, and nervous systems with psionic power, alone.

Nezna Beasts are formed when high concentrations of bismuth grows in clusters of deep crystal or are otherwise influenced by psionic power. Due to the nature of the creature's formation, it isn't likely to come across more than one or two at a time. Commonly found in caves that are plentiful with deep crystal, the Nezna Beast seems to sustain itself upon the psionic mineral, even directly incorporating consumed crystal into its body. This makes the terrifying creature for more likely to doom whole mining expeditions or caravans through the deeproads of the Underdark than the average traveler on the surface, but there are exceptions - the creature appears to be drawn to significant sources of psionic power, and some accounts do detail assaults occurring above-ground.

While smarter or more clever than most creatures, no reasoning exists within a Nezna Beast. Attempting to delve into its mind in order to discern its motives often only reveals that the creature, for all of its mental strength and fortitude, is largely single-minded and dedicated to the consumption of psionic power.

While not carnivorous, Nezna Beasts are typically hostile to all life they come across, seeking to consume the latent psionic power in any being, no matter how small. A Nezna Beast relies largely on its brute strength and powerful psi-like abilities in combat to decimate and overwhelm its opponents, as well as defend itself with psionic protection. Whenever possible, it will attempt to focus its psionic power in order to add psionic power to their already devastating charge and natural weapons.