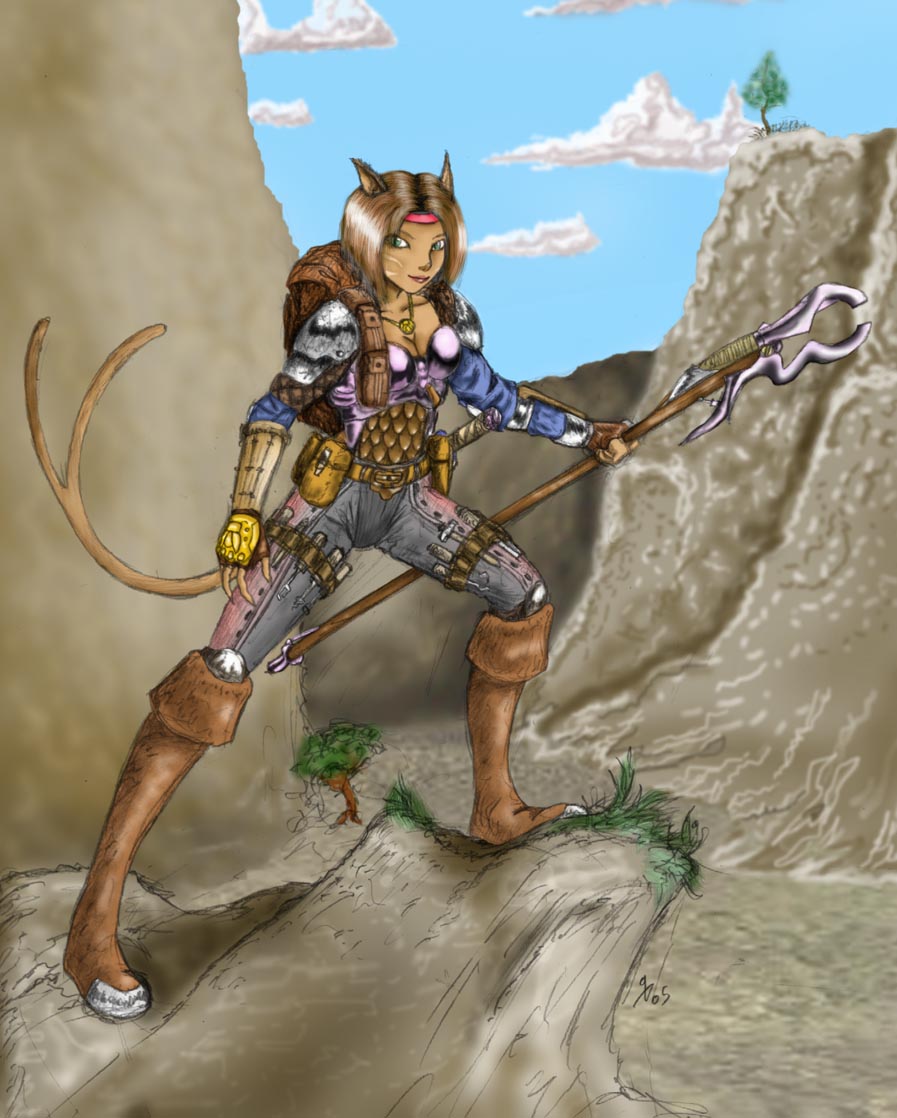 A female Nekomata of the Hotaru clan.

Over five hundred years ago, when the Plain of Blood was merely a rocky wasteland, a small group of catlike humanoids moved into what became southern Leoland and secretly sequestered itself in the forests. They fled a strict, domineering patriarchal society, and thusly, the group was all female. These are the Nekomata. Today, they have spread across the forests of Leoland and a few have left to create small communities in Galsing.

Nekomata on the continent are always female; somehow Nekomata reproduction requires a male of the race to produce males. They have, however, discovered that male humans are capable of successfully breeding with them and producing Nekomata daughters and human sons. This practice, in addition to a variety of rituals, have kept their numbers fairly stable and relatively small.

Nekomata have an affinity for a magical school they call “corpse dancing,” known among humanity as necromancy. They can see the flows of life and death energy, and most of them learn a little bit about how to manipulate it. Much superstition surrounds their culture and appearance, but most true knowledge about them is esoteric and not widely known except in the analytical circles of colleges and universities.

Though they vary widely, Nekomata have a few predictable behavioral aspects. They like jewelry, fancy clothes, and just about anything with an artful sheen. Most Nekomata are quiet in company other than their own kind, saying only what is necessary. A group of them, however, will talk for great length about any number of subjects, trading information and ideas or knowledge uncovered. All Nekomata have an intense affinity for the arts of necromancy, and can even sense the pale aura of death to a degree, and enjoy learning new ways to combat or control the undead.

The Nekomata stand somewhat shorter than humans, approximately three or four inches shorter than average. They typically are slender and muscled tightly, with the movements of ligaments and muscles visible under the skin of a stretching Nekomata. Their eyes are large and round, and are often green or gold. The hair on their heads is usually light and thick. Most of them wear it short, and lesser castes wear their hair in rounded knots just behind their ears. A Nekomata’s ears are higher on its head than most humanoids and are situated on a variety of muscles that cause them to constantly twitch or bob about. They have quite round eyes, some would say disturbingly so.

Typical Nekomata clothing consists of a simple silk jacket and breeches with wooden sandals. On special occasions, they may dress in a kimono.

Nekomata are feared in Leoland, where they have settled. They live in the forests, and their villages are often guarded by the dead. Local folklore paints them as creatures of the devil, living as they do in the forests and practicing strange magical rituals. They have a reputation as kidnappers, sneaking into villages and taking away children or luring young village men into the woods, never to return.

These rumors are at least partially true. While it is true that young men often vanish into the forests, the Nekomata claim it is of their own volition that they seek out the villages that lay buried beneath the trees and watched over by the dead. Nekomata also take living humans as payment for healing services rendered when the client refuses to pay, usually the last daughter of the family in question, though they will take the last son if there is no other option. What they do with these children is anyone’s guess.

Nekomata live in a strict lawful society. The individual, though, can develop however she likes. The more chaotic among them leave to explore human society until such time as they can live more properly among their own kind. Evil is rare and frowned upon, as evil is accompanied by a destructive nature that bodes ill for the continued survival of the race. Since many Nekomata follow the path of necromancy, however, it is a sad state of affairs that many drift towards the path of true personal power at the expense of all else.

The Nekomata people live in forests, cutting down only enough trees to build their small and well-lit villages. As quiet as a human town is during the night, so is a Nekomata village during daylight hours, for the cat-demons are nocturnal. During the night, the Nekomata tend their crops, removing insects and weeds, and making sure everything is set for the day to come.

At dawn, the Nekomata sleep and the undead of the village are sent to guard the territory. Zombie guards watch over the towns, dressed I fine clothes and wearing noh masks on their faces, to frighten away intruders and drive them off if need be.

Men who come into a Nekomata village as either rescued refugees from the plague, children stolen from human villages, or who simply get lost in the forest, are treated just the same as every other member of the society. They are often given fieldwork or, in the case of children who have been raised by the Nekomata, spies to keep watch on the inquisition or simply local human villages on the whole.

Living as close as they are to humans, they are bound to interact with them. Most often this interaction takes the form of angry villagers driving out a newly arriving group of Nekomata in their forests, but if the new Nekomata are quiet enough, they can get a village planted, built, and sequestered away in some hidden glen before anyone notices. Other times humans may seek the Nekomata out to cure a group of villagers sick with the plague. Help is given, usually in exchange for food. If the villagers feel like swindling the Nekomata, they appear to allow it and return to the forest, only to send out an assassin to take the youngest child of the village, never to return. If female, the child is transformed into Nekomata by a ritual. If the child is male, he is raised among the village as another member of the fief.

Villages are simple affairs, with wooden and paper buildings, lit paper lanterns, and packed dirt streets. Most of them are not much larger than ten buildings, as they must stay small to stay hidden.

Nekomata worship revolves around spirits and a host of minor entities, as opposed to gods. The most powerful Nekomata in the village has two tails. As they have an affinity for necromancy, they are most often likely to develop casters who specialize in it. As they use and channel negative energy, the Nekomata’s tail splits. Such two-tails are considered the spiritual leaders of society, and are treated as such. The more split in the Nekomata’s tail, the more powerful she is in her fief. Nekomata cremate their dead, perhaps out of respect or fear of their corpse dancing powers.

Legend holds that the Nekomata escaped from a tyrannical rule where they were slaves to some ancient and esoteric empire. Now that the blood plains are volcanically active once again, the legend can neither be challenged or confirmed. For now, they are content to worship the spirits and their own abilities in the manner handed down by their ancestors.

A few Nekomata in Galsing have managed to ease their way into society there, and have found a form of acceptance. Some of the larger cities have Nekomata blocks where most citizens on the street are of the race. In such cases, it may not be unusual to see a Nekomata attending or even teaching in a university or college. Language: Nekomata language contains many rolling sounds, and the written form encompasses a dizzying array of symbols and permutations of those symbols. When most Nekomata attempt to speak common, their tongues hang upon the words, almost as if the tongue and lips movements of the trade language are far too stiff for them. They consider it taboo to teach outsiders their language.

Nekomata names consist of two or three syllables. Each member of Nekomata has a unique name symbol, but they first learn to spell their name “phonetically,” by combining the symbols of the sounds that make up their name. As they age, some Nekomata become prone to adding syllables to their name, transforming it from simple to a long and flowery near-sentence length moniker.

For the most part, Nekomata tend to stay at home. Sometimes, however, as in all societies, there is the desire to see what is beyond the forests of home. Nekomata child-stealers often wander the countryside as well, getting help when they can and living by their wits. Other Nekomata to the north can attend colleges and participate in any facet of life they desire, even if that life involves adventuring. To the south, across the straight towards Falstok, the Nekomata are a part of normal society and accepted, even if they are rare, and the Blood Plains needs as many adventurers as it can handle to assist with the goblins and orcs there.

Without the Plain of Blood and the crossing, Nekomata take a whole different role in the world. Back home, female Nekomata haunted graveyards in pairs and trios, teaching humans who came to them the powers of necromancy and the secrets of stealth, while male Nekomata wandered the landscape, seeking wholeness of spirit (and graveyards where females of the species might be waiting). In a setup like this, they become even more mysterious and their dealings are even more laden with superstition (and possibly fear).

Items and Feats to help the Nekomata[edit]

Nekomata Spear-blade This is a shaft of wood, usually painted and lacquered, with a curved and bladed end, almost like a sword. It deals 1d10 slashing damage and has a critical multiplier of x3. It weighs 15 pounds and costs 10 gp. A Spear-blade has reach. You can use it to strike opponents ten feet away, but you can’t hit adjacent targets with it.

Nekomata learn to use the Spear-blade in at least a serviceable manner from a very young age for defense of their homes. Every home has one, and at least every member of the family understands the basics of how to use the weapon, even if they themselves are not warriors. As such nekomatas treat the Nekomata Spear-blade as a martial weapon.

You can hit adjacent foes with a Nekomata Spear-blade.