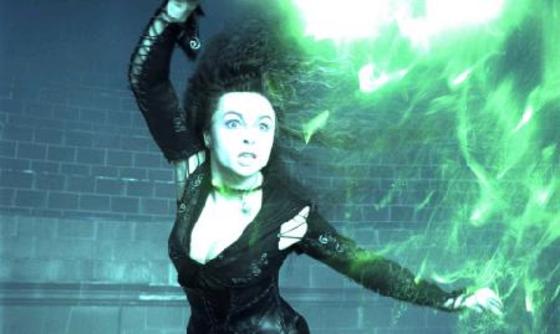 It is common knowledge that there are ways other than spells to bend magic, such as the Warlock who derives his arcane power from the forces of Devils and Demons. There are, however, those who draw their power from Death himself, unleashing this tremendous power upon those who oppose them to nullify life at will. Such an example, is the Necromaniac.

The Necromaniac is a completely offensive class, with various abilities to use on their enemies.

Races: Any. Children chosen by Death to put Creation to rest appear on any race.

All of the following are class features of the Necromaniac.

Weapon and Armor Proficiency: Necromaniacs are proficient with all simple weapons, but not with armor.

Deathly Blast (Su): A Necromaniac's primary ability, is to unleash a blast of nether at a target, dealing negative energy damage to living creatures (both corporeal and incorporeal), with a range of 60 ft. That Damage is 1d6 at 1st level, 2d6 at 3rd level, and it is increased by another d6 every two levels, just as shown in table : The Necromaniac. He can use that ability at will, and it can be affected by metamagic feats, but a metamagic deathly blast can be used only once per minute. Effects used on deathly blast have a DC of 10 + 1/2 neromaniac level + Cha modifier.

Blast Shape and Effect (Ex): Each time Necromaniacs gain access to this class feature, they choose one effect and blast shape from the following, to use it to their Deathly Blast. They can use only one Shape per blast, but they can apply several effects at a single blast. Effects stack with killing discipline.

Deathly Spear : This is a blast shape that turns deathly blast into a sharp projectile with a range of 260 ft.

Deathly Chain : This blast shape allows the Necromaniac to strike an additional target/2 levels, but the additional targets can't be away than 30 ft. of the preivous target. (Minimum level 3)

To the threshold ! : This blast effect causes the victim who fails a Fortitude save be dropped to -9 hitpoints. (Minimum level 9)

Overdrive (Su): When the Necromaniac activates this ability, he becomes insane, but very powerful for a 2 rounds + Cha modifier. He has a temporary -4 Will save, and he can't do any task that requires patience. He gains + 4 Charisma and the DC of his effects is increased by 2. When Overdrive ends he suffers a -2 Wisdom. The Necromaniac can extend Overdrive but he takes additional Wisdom Damage after it (One additional round per wisdom point).

Killing Disciple: The Necromaniac becomes more familiar with the philosophy of killing, and as a result, he gains many advantages, depending on disciple rank :

Grey : The Necromaniac can now change his deathly blast so that he can damage undead as well.

Black : The Necromaniac Becomes now immune to death effects. He can, of course suffer natural death.

Shadow : Shadow of death no longer harms the Necromaniac. As a result, he is healed by negative energy, instead of being damaged.

Death : Deathly Blast becomes now greenish , with a faint of acid. Everything that is striken by a deathly blast must now success a fortitude saving throw, or take a negative level.

Nihil : Necromancers are now fully aware of what killing means, and how to do it the most effective way. His instant-death blast effects now harm undead as well.

Religion: Most Necromaniacs tend to worship deities of death and destruction.

Other Classes: Necromaniacs tend to cooperate well with Necromancers, Rogues and Neutral Clerics. However, Paladins and other moralists seem to dislike Necromaniacs.

Necromaniacs fit the psycho murderer role in the world.

Daily Life: Necromaniacs spend most of their time killing little animals, insects and even humans (they don't see any difference).

Notables: Bellatrix Lestrange, often mistaken for a Wizard, is a well known Necromaniac. Why isn't she a Wizard ? Well, have you ever seen her using anything else than Avada Kedavra ?

Organizations: Some times, Necromaniacs form brotherhoods devoted to the art of killing. The mission of putting Creation to sleep is what unites them.