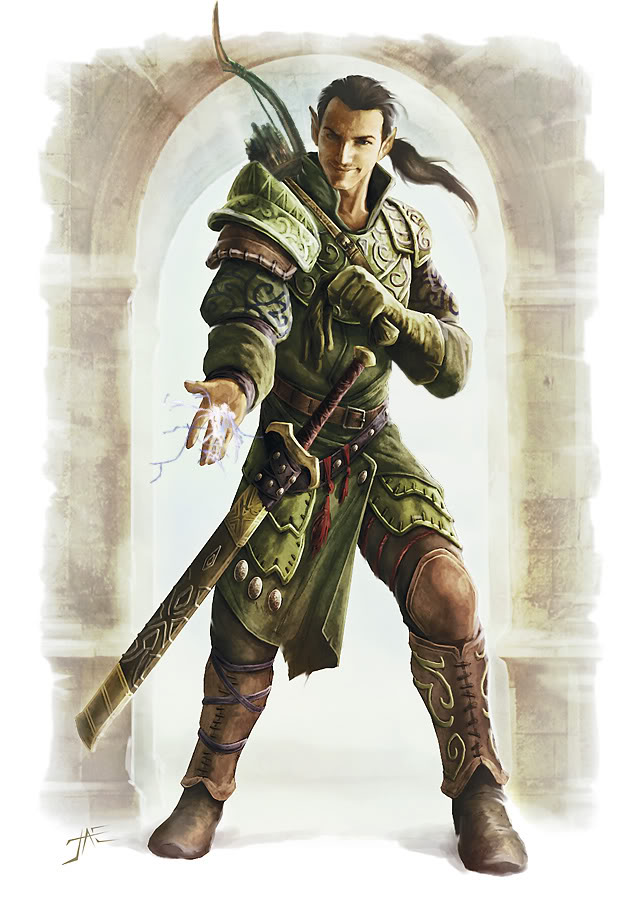 A mystic blade is a swordsman who harnesses arcane energy and channels it through his sword.

The mystic blade is usually a front-line combatant, and his spells supplement him to suit this purpose. He also gains the ability to imbue his weapons with elemental energy that he calls upon from the energy around him.

Abilities: As a melee combatant, Strength and Constitution are both valuable to aid in the mystic blade's survival. Depending upon his preferred armament, Dexterity could be equally as important. But Intelligence is perhaps his most pivotal stat because it defines the mystic blade's strengths and limitations as an arcane spellcaster.

Races: Humans tend to make the best mystic blade builds, do to their lack of restrictions and bonus feat at first level.

Alignment: Any, but they tend to be neutral.

All of the following are class features of the Mystic Blade.

Weapon and Armor Proficiency: A mystic blade is automatically proficient with simple and martial weapons, all forms of armor, and shields (except tower shields).

A mystic blade needs not prepare his spells ahead of time.

Armored Caster: Normally, armor of any type interferes with an arcane spellcaster’s gestures, which can cause spells to fail if those spells have a somatic component. A mystic blade's limited focus and specialized training, however, allows you to avoid arcane spell failure so long as you stick to light armor and light shields. This training does not extend to medium or heavy armors, nor to heavy shields. This ability does not apply to spells gained from a different spellcasting class.

Eschew Materials: At 1st level, a mystic blade gains the eschew materials feat even if he doesn't fulfill the prerequisites.

Channel Spell: At 5th level, a mystic blade gains the ability to channel spells through his weapon. Any spell the mystic blade can cast can now be channeled through a single melee attack, which is made in place of the melee touch attack as part of the spell. This attack is rolled as a normal attack roll, not as a melee touch attack. If it hits, however, the attack deals normal weapon damage as well as the effect of the spell. The weapon looses it's spell 3 rounds after the mystic blade is no longer holding it.

Phase Step: Starting at level 4, a mystic blade can teleport the distance of his base speed as a move action once per day. He can teleport under any circumstance where he is able to make a stepping motion with one of his legs. He can phase step one more time each day every other level.

Grand Reach: Starting at level 7, a mystic blade can channel magical energy (using whichever elemental form his sword is in) into a ranged slash attack. This attack has a range of 50ft at 7th level, 75ft at 11th, 100ft at 15th, and 125ft at 19th with a width of 5ft hitting everything in its path dealing damage equal to the sword's usual damage using this element.

Religion: Mystic blades do not have one certain religious affiliation, many worship whoever would be the most helpful prior to their upcoming adventures.

Other Classes: Mystic blades get on well with wizards, for they find commonalities in their appreciation of arcane study. They also respect fighters, whose martial skills rival the mystic blades' own. Other classes are generally tolerated, but a particularly savage and unthinking character (a barbarian, for example) might draw the mystic blade's ire.

Combat: The mystic blade's greatest strength is his adaptability. While he does not possess the full spellcasting abilities of the sorcerer and wizard (or the sheer power of, say, a wish spell), his ability to cast effectively in armor and hold his own in melee allow him to find a niche in a party. His ability to bestow enchantments on his weapon also grants him a great deal of flexibility in combat.

Advancement: A mystic blade is already a well-rounded character complete with martial ability and limited but still formidable arcane casting ability. A muliclass to rogu would create a powerful blend of multiple approaches. In keeping with their versatility, a mystic blade can take levels in martial or arcane prestige class, depending on how the player wishes to progress.

Mystic Blades in the World[edit]

Daily Life: Mystic Blades do not like to sit around. They will often go exploring, and get themselves in sticky situations.

Organizations: There is no official organization of mystic blades.

NPC Reactions: Since mystic blades are uncommon, they are usually assumed to be fighters.

Characters with ranks in Knowledge (arcana) can research Mystic Blades to learn more about them. When a character makes a skill check, read or paraphrase the following, including information from lower DCs.