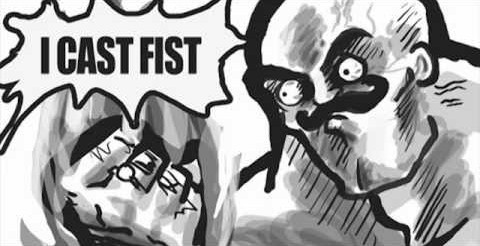 What ho, Muscle Wizard! Might you cast us a spell?

Muscle Wizards have honed their bodies to physical perfection. Their sculpted physiques and massive strength are the envy of all those around them, and their combat abilities are nearly supernatural. Whether actual magic is involved in their training is debated by scholars and philosophers, but only their "Fist" attacks are considered spells.

The Muscle Wizard is very combat oriented. Despite being Strength-focused, he makes an effective face of the party due to his Enthralling Bod class ability. He's a frontline fighter and tank, who gains some limited ranged capabilities later on. Useful party members for a Muscle Wizard to bring along are ranged damage dealers and support casters who can heal and buff him.

Abilities: Strength is the most important feature for this class. Constitution and Dexterity are useful for survivability and Armor Class. Charisma, Intelligence, and Wisdom are the least important.

Races: Any race capable of having an impressive, muscly physique can pursue the path of the Muscle Wizard.

Alignment: Muscle Wizards can be of any alignment.

All of the following are class features of the Muscle Wizard:

Weapon and Armor Proficiency: The Muscle Wizard is proficient with nothing but his fists. The rock-solid construct that is his magnificent bod is the only weapon or armor he will ever need.

Juggernaut: (Ex) The Muscle Wizard is so mesmerizing, opponents have a hard time aiming their attacks correctly. This allows the Muscle Wizard to add his Strength Modifier to his AC as a Deflection Bonus.

Cast Fist: (Ex) The Muscle Wizard's preeminent ability. His lifetime of physical training and studies in the art of punching things has allowed the Muscle Wizard to defy the laws of nature. The Muscle Wizard can make an unarmed attack at their highest base attack bonus as an immediate action a number of times equal to his strength modifier. This deals unarmed strike damage plus 1d4 force damage per level in Muscle Wizard. Cast Fist also has the effect of the Awesome Blow feat without -4 to hit penalty.

Endure Elements: (Ex) The Muscle Wizard's body rises above the harshness of the world. He can survive comfortably in temperatures ranging from -200 to 200 degrees Fahrenheit without needing to make Fortitude Saves.

Improved Fist(5) (Ex): The Muscle Wizard's Cast Fist generates a 15-foot line or cone of force. Anything caught within the effected area is entitled to Reflex Save for half damage.(DC 10 + Muscle Wizard Class levels+Strength Mod) This range translates to the knockback effect of the Awesome Blow ability. Additionally, the damage dice of the force damage increases to d6's.

Enthralling Bod (Ex): The Muscle Wizard's devotion to physical perfection naturally draws the favor of others, while also allowing them to overcome any and all cosmetic defects. Ignore all negative cosmetic effects induced by any disease, magic or divine spells and abilities. Additionally, he may add his Strength modifier as a bonus to all Charisma-based skill checks.

Speed of Muscle: (Ex) The Muscle Wizard adds his Strength modifier to his speed and Iniative as an enhancement bonus.

Improved Fist(10) (Ex): The Muscle Wizard's Cast Fist generates a 20-foot cone of force. This range translates to the knockback effect of the Awesome Blow ability. The damage dice of the force damage increases to d8's.

Double Fist Punch: (Ex) The Muscle Wizard strikes with both fists simultaneously. This attack deals damage equal to double the Muscle Wizard's unarmed strike damage, plus the force damage. The die size for the force damage is increased by one step for this ability. (d8 becomes d10, d10 becomes 2d6, 2d6 becomes 2d8, etc.) This ability is usable once per day and counts as using Cast Fist.

Improved Fist(15) (Ex): The Muscle Wizard's Cast Fist generates a 30-foot line or cone of force. This range translates to the knockback effect of the Awesome Blow ability. The damage dice of the force damage increases to d10's.

Frost: Opponent is Chilled, taking a -2 to hit. (Fort Negates)

Lightning: Opponent is Dazed for 1 round. (Fort Negates)

Sonic: The punch ignores up to 10 points of Hardness when striking an object.

Improved Fist(20) (Ex): The Muscle Wizard's Cast Fist ability generates a 40-foot line or cone of force. This range translates to the knockback effect of the Awesome Blow ability. The damage dice of the force damage increases to 2d6’s.

Should a Muscle Wizard ever take his magnificent bod for granted and cease to maintain its chiseled magnificence, all his class features cease to function until he returns to honing his physique.

The God Fist: The ultimate ability of the Muscle Wizard. Cast Fist becomes The God Fist. It generates a 60-foot cone of force. Anything caught within the cone must make a save(DC 10+Half Muscle Wizard levels+Strength Mod vs. Fort) or die instantly as they're obliterated by the awesome might of The God Fist. Anything that makes the save still takes full damage as if they were struck by the Improved Fist(25) class skill.

Bonus Feats: The Epic Muscle Wizard gains a bonus feat every level after 20th except for 25th and 30th.

Weapons: Fists. What else would you need?

Other Classes: Muscle Wizards get along well with everyone in general, for no one can resist the allure of their raw muscly power.

Combat: The Muscle Wizard is on the front lines punching things.

Advancement: Muscle Wizards very rarely multi-class. Most want to stay the course and continue honing their bodies to the best of their abilities.

Muscle Wizards in the World[edit]

Daily Life: Muscle Wizards spend most of their days exercising and training in the ways of punching things.

Organizations: Muscle Wizards do not have their own organization, though they do enjoy fighters' guilds and fight clubs.

Muscle Wizards in the Game[edit]

Muscle Wizards make great body guards or military officials. Some lead their own fight clubs, though the show-offish nature of the Muscle Wizard prevents them from running anything underground.

Adaptation: The Muscle Wizard could also be an actual spellcaster that uses magic to vastly increase his physical might.