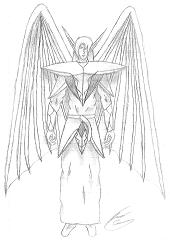 The Murearomalquins are called Pseudodemon by the common folk due to the difficulty of saying their true name. Their true name is derived from the Elven “morearamaquen” meaning Dark Winged One. They can also be known as "Demons who are not."

During the time the elves ruled the land, their were two dragons, twins named Morearamaloce and Durrovalug. Morearamaloce was female, and she was a beautiful crystal Black Dragon with feathered wings. Durrovalug was the male of the two, and he was a handsome ice black Dragon with skin wings. They loved living things and hatchlings, they wanted children of their own, but they could not because it was against their creator. By their creators rules they can only create stuff through energy, and it has to be a different race than they wore, so they set out to learn the ways of energy. They learn but they did not want to make something that was already created. So they started to design a new race. It took them 200 years to design the new race. What they design was the Psuedodemon. There was one problem they had only enough power to make 4. So they made 2 with feathered wings, male and female, and 2 with skin wings, male and female. It took them 600 years to make the 4 of them. They made a home for them too in the mountains; they named it Kawr-tal-lelt. After a year or two, the new race started to grow. After 1200 years their wore 16 of them & they had a complex infrastructure. Than in the next 600 year there was a boom in the birth and there wore 50 instead of 32. In 300 years there wore 150. That is when some of the older ones left to see the world. Not long afore that they founded Durrovalug’s gate, the gateway to Kawr-tal-lelt. There are 2 ways into Kawr-tal-lelt, one is to fly up the cliff face on which it’s build on, the other is to go to Durrovalug’s gate and go through the Psuedodemon’s caves up to Kawr-tal-lelt. It went on with small groups leaving to make new sediments, and growing. Now a days Psuedodemons are every where if you look for them, but there harder to spot then drow, unless you’re in the right places. Psuedodemons get most of their needs through magic, like food, water, and metal. The youth are joyful, fun-loving, and well-behaved. The old are all of that but more.

Young Pseudodemons tend to be somewhat aggressive and rash, but as they age they become more mild natured and will try to avoid conflict wherever possible. If conflict is unavoidable or their territory is in danger then they will become very aggressive and protective of any allies they may have.

Pseudodemons typically stand 3 to 5 feet tall and weigh anywhere from 50 to 125 pounds. They have long silky white hair and skin as black as the darkest night. Their eyes normally glow red, but can change in accordance to their mood. Their body type is very close to that of an elf except they have wings and their ears range from 10 to 14 inches in length. Their wing type depends on their place of birth, those born above ground have wings of feather and those born below have wings like that of a bat. Female Pseudodemons have smaller wings than the males but are still large enough to support flight. Psuedodemons can live several millennia, but they never physically age after they grow to maturity at around 500-600 years. Due to this, Pseudodemons usually die looking healthy as a horse when they are around 6000 years old, but some can & have lived as long as 9000 years. Pseudodemons rarely become sick after they reach maturity, but the young Pseudodemons are as vulnerable as any other race to disease. A unique attribute common to all Pseudodemons is that they are born with rune-like tattoos which are invisible unless a Pseudodemon becomes highly roused or is casting a magic spell in which case the tattoos will become visible and start to glow.

Pseudodemons are little heard of in the above world, so they are neither hated nor loved in general, though they tend to be hostile toward the Drow.

Pseudodemons don’t like to meddle in other race’s affairs so when they are with other races they tend to turn toward a neutral alignment, but amongst themselves there is no particular alignment that is favored the most.

Pseudodemons are spread very thinly over the world and in most places you will only see a maximum of two at a time. However in their home city of Kawr-tal-lelt, located near the spine of the world, there are over a hundred Pseudodemons gathered together in a community.

The eldest Pseudodemons have Shiguleafeltic names, but as time passed the Pseudodemons began to use Elven and Drow names instead.

Pseudodemons are not uncommon and often set out on adventures, not to seek treasure, but often times to find others of their race or to seek out the knowledge that can only be found from traveling. 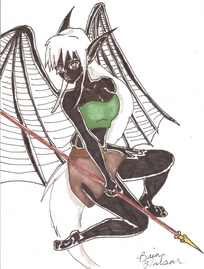