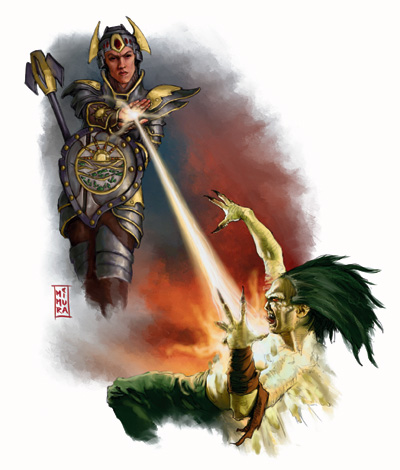 The Church of Lathander is well known and highly respected across Faerûn. A large part of that respect comes from Lathander's elite priests, who are known as the morninglords. Morninglords are, in many ways, the epitome of the classical cleric archetype - they are kindly healers and advisors, stalwart protectors, and implacable foes of the undead. Because morninglords believe it is their duty to bring Lathander's light to all the dark places of the world, they often travel the breadth of Faerûn, preaching the glories of their god to any who will listen and smiting his foes wherever they appear.

Clerics comprise the majority of morninglord candidates, but paladins of Lathander frequently hear the calling as well. Multiclass fighters, and more rarely rangers, sometimes join the ranks of the morninglords as well, but other classes are very rare.

Adaptation: Although originally titled with Lathander in mind, this prestige class doesn't have to be about Lathander. It works just as well with any sun- or light-focused deity that favours creativity, nobility and renewal.

To qualify to become a morninglord, a character must fulfill all the following criteria.

All of the following are Class Features of the morninglord prestige class.

Weapon and Armor Proficiency: Morninglords gain no additional proficiency with any weapon or armor.

Spells per Day/Spells Known: When a morninglord level is gained, the character gains new spells per day (and spells known, if applicable) as if she had also gained a level in whatever divine spellcasting class she belonged to before she added the prestige class. She does not, however, gain any other benefit a character of that class would have gained. This essentially means that she adds the level of morninglord to the level of whatever other spellcasting class the character has, then determines spells per day and spells known accordingly.

If a character had more than one divine spellcasting class before she became a morninglord, the player must decide which class to assign each level of morninglord for the purpose of determining divine spells per day and spells known.

Turn Undead (Ex): A morninglord adds her morninglord class levels to her levels in any other class that grants the ability to turn undead for all purposes related to turning undead.

Lathander's Light (Su): A morninglord may cast Daylight once per day as a spell-like ability, with a caster level equal to her divine caster level. Additionally, whenever a morninglord casts a spell with the light descriptor, all ranges and areas are doubled.

Creative Fire (Ex): Morninglords are creative, expressive people, much like their god, and work hard with a strong if often jovial focus. At 2nd level, the character gains a bonus equal to her morninglord level on all Craft, Perform and Profession checks.

Bane of the Restless (Sp): At 4th level, a morninglord may cast Searing Ray once per day as a spell-like ability, with a caster level equal to her divine caster level. Furthermore, whenever the morninglord casts Searing Ray targeting undead, the damage increases as if the Empower Spell feat had been applied.

Extra Greater Turning (Su): Starting at 5th level, a morninglord can perform an additional greater turning (the granted power of the Sun domain) per day. At 9th level, she can additionally perform one more turning per day (for a total of two extra greater turnings).

Blessing of Dawn (Su): The sight of the morning sun is an inspirational vision for all morninglords. Beginning at 6th level, a morninglord gains a +2 morale bonus on Will saves from sunrise until noon. This ability is in effect only while she can see the sun; the effect is suppressed any time she is deprived of the sight of it during this period.

Maximize Turning (Su): Once per day, a morninglord of at least 7th level can automatically achieve the maximum possible result on a turning damage roll.

Rejuvenation of the Morn (Su): Dawn is a powerful symbol of rebirth and renewal. Once per tenday, a morninglord of at least 8th level may spend one uninterrupted hour before dawn praying to her patron deity. As soon as the sun rises after this prayer ritual, she (or a single target that is with her) gains one benefit of her choice from the following list:

If the morninglord's prayers are interrupted in any way, the attempt is ruined, and she must wait a full day to try again.