Ageless creatures from beyond time, ever enduring and wise with age 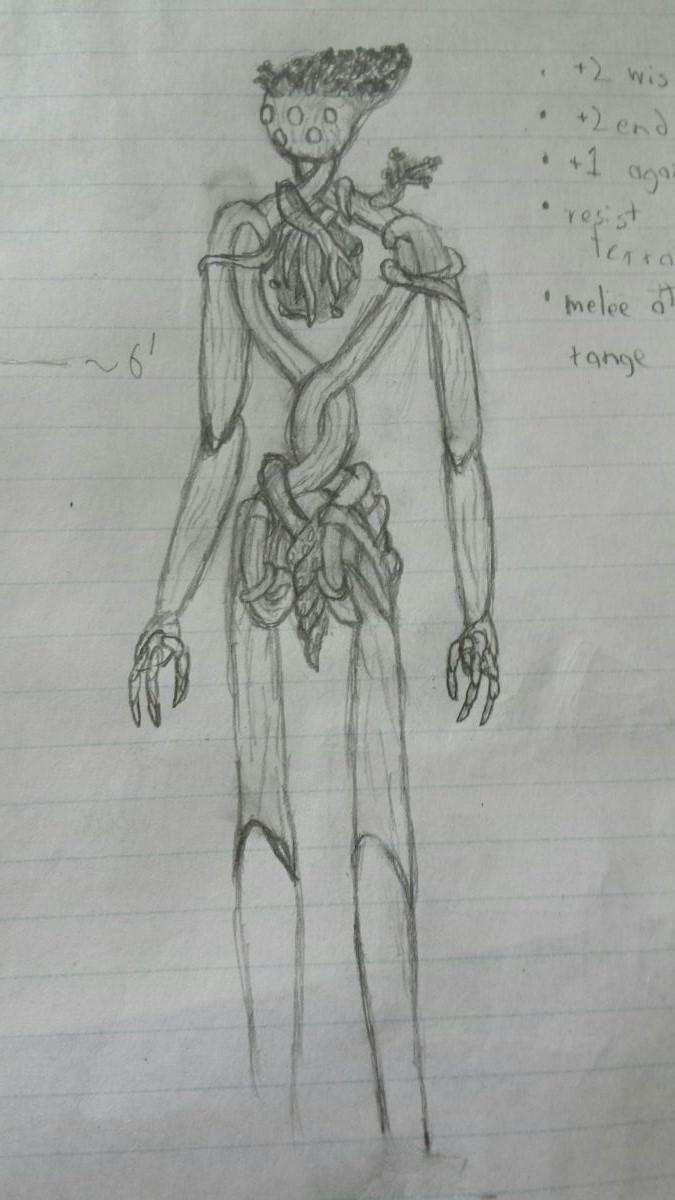 Moldaren are the an ancient race, predating the rise of the Precursors, and are often referred to as the Archaic for this reason. The Moldaren don’t keep history in the same manner most races do, either keeping it in memory or passing it on to others. As such much of the Moldarens perspective on history is lost to the ages, however the Moldarens are often present in the history of other races, and especially prominent in the writings of the Precursors. From what is known the Moldaren were heavily involved in the development and and advancement of the Precursor. However, after the invasion of the Void and subsequent fall of the Precursors, the Moldaren decided to never make a joint effort to raise another civilization again. After these events the history of the Moldaren becomes obscure and even more poorly recorded. Occasionally appearing in the history and legends of other races, they are often called spirits of nature or by some other similar term of great respect by more primal or primitive races. More advanced nations and cities normally have no mention of the Moldaren in their history and when they do it is often as a shameful or demonic deity from their ancient past or a monster, benign or otherwise.

Moldaren are gigantic fungoid humanoids standing beyond seven feet tall. Despite their height they are rather light due to their mostly fleshy fungus bodies and mostly hollow frame. They have no typical mouth and have a set of simple eyes along their head. Moldaren speak through vibrations of their neck projecting sound equally in all directions rather than focused forward. Moldaren come in countless colours, but almost all are very dull in tones. Moldaren are also referred to as the Archaic due to their immense lifespan. The Moldaren are very slow to age, only becoming fully grown after roughly 200 years, easily living up to 30,000 years, while rarely dying from natural causes or environmental effects. Moldaren do experience some signs of aging into the ends of their life but they seldom die from “old age”. Moldaren often have colonies of other fungus that live benignly on them. However the wide array of fungal species that can live on them leads to a large degree of diversity between individuals, additionally as the Moldaren travel they may gain and lose fungal colonies vastly changing their appearance in the process. Though Moldaren typically never die they Moldaren also hardly ever reproduce. Moldaren are Asexual and can in theory reproduce at any time. However a Moldaren needs a large corpse of a magical creature and even then many Moldaren fail to mature into their sentient form dying well before they are "born". Since Moldaren don't need clothes they only place magical equipment over their most important part, the central orb that lies within their chest, plate, leather, chain, or whatever type of armor they use is often exclusively placed over this spot as it holds nearly all of their vital organs.

Moldaren are closely tied to nature and as such hold it with utmost importance. They are often unfriendly to larger civilizations as they are often mistaken for Ents or other similar monsters. They tend to have a better attitude to those is smaller civilizations or those of tribal heritage as they tend to be less hostile to such a large wandering creature.

Moldaren don't really have proper communities. Being both solitary and nomadic by nature they often find themselves traveling alone and wandering aimlessly for ages. Sometimes Moldaren do wander together but this seldom lasts as they stray by nature, though there are some exceptions. Most natural fauna tend to follow Moldaren throughout their territory as their presence accelerates decay and thus new growth. While more beastial creatures tend to ignore them unless they feel threatened as Moldaren are generally inedible. More primitive and tribal cultures often see the Moldaren as living earth and spirits of life and death. More civilized people tend to see Moldaren as wandering beasts either sending them off, ignoring them, or if the civilization is particularly hateful attacking the Moldaren in question. On occasion religiously zealous groups will actively hunt Moldaren down deeming them demons or unnatural beasts (due to how uncommon they are). In contrast bandits, raiders, and other outlaws tend to be friendly to Moldaren Both because their knowledge of history and the landscape can often provide good information and a distraction, but also because the Moldaren seldom carry anything of worth for the bandits to take. Some Moldaren oversee and help guide younger races, though mostly in smaller towns or among tribal people. This normally comes in the form of helping them cultivate food and guide their expansion over generations. This often leads to the Moldaren becoming a sort of elder or oracle leading to them being embedded into the town's folklore, even long after the Moldaren has left.

Moldaren Adventurers are very common when compared to other races, almost every Moldaren has adventured at some point in their life, many have done so several times throughout their life. Moldaren often adventure to explore, learn, make legends or simply guide fellow adventurers though the piece of land they call home.

Druid: Druids are a common class of the Moldaren fitting their more wizened and elderly approach to life. Druidic Moldaren are usually calm and collective often guiding the flow of battle like they have guided the formation of forests and rivers. Druids are also based in wisdom which Moldaren have a natural affinity to.

Warden: Moldaren Wardens are often from unusually hot headed and rash individuals, often having to fight for their lands and defend from wild beasts that have gone astray. Moldaren wardens are very tough and hearty allowing for them to take considerable damage in combat. Additionally the wisdom allows the Moldaren wardens to fulfill any secondary roles they have in combat more effectively.

Wizards: Wizards are a very popular choice for Moldaren adventurers as both wisdom and intelligence come naturally to the race they make potent spell casters that can devastate the battlefield. These Moldaren are normally very proud of their accomplishments and often have a habit of seeming very vain.

Gelonem is a Moldaren artificer; starting their adventure to study the long lost artifacts of the precursors this young 400 year old, helps their party by tending to and improving their magical equipment as well as allowing their various ancient contraptions to blast their foes and assist their allies. They have been apart of many adventuring groups throughout their life but has brought more success than previous to their most recent party as they has finally grasped how to properly manipulate his contraptions.

Ulia is a Moldaren Battlemind; they are unsure has they gained their psionic powers but they devoted their newfound strength to those who they had failed in the past. Vowing to defend their newfound friends they became a battlemind. Fighting with their newfound companions they traveled the world to find and close the rips that allowed the aberrant invaders to destroy their homeland.

Allalel is a Moldaren Invoker of Bahamut; Patron of justice in a cruel world, Allalel has seen countless atrocities throughout the ages they have lived and has vowed to never let them the happen again. They invokes the wrath of Bahamut against all those who do evil and has banded together a band of noble adventurers to rid the world of the demons, devil, and accursed undead.

When creating a Moldaren adventurer, here are a few points to consider.

Elder to all Moldaren often believe that they are an elder to all races and often refer to them as children or by other endearing names, some races tend find this patronizing and rude, sometimes leading to conflict, though others may understand just how young they are in comparison to the Moldaren and accept their wisdom and age.

Lost in the Past As Moldaren live to incredibly old ages and tend to wander they often lose track of time, talking of events centuries old as if it were yesterday. This can often confuse and annoy others as they can get information out of date if even the right thing at all. Though those who are more studious may find valuable lessons from the past within these stories.

Beyond Patience Since Moldaren can outlive even dragons, waiting for the world to change around them is often a very real option for them. This can lead to Moldaren simply choosing to comeback to a problem later rather than seek an immediate fix. This can be frustrating for many who were expecting the Moldaren to be of immediate assistance, but more often than not when a Moldaren chooses to wait for a change it is often one of the better solutions.

When your Moldaren character gains a class utility power after 1st level, you can forgo taking a power granted to you by your class. Instead you gain a Moldaren utility power of the same level or lower.