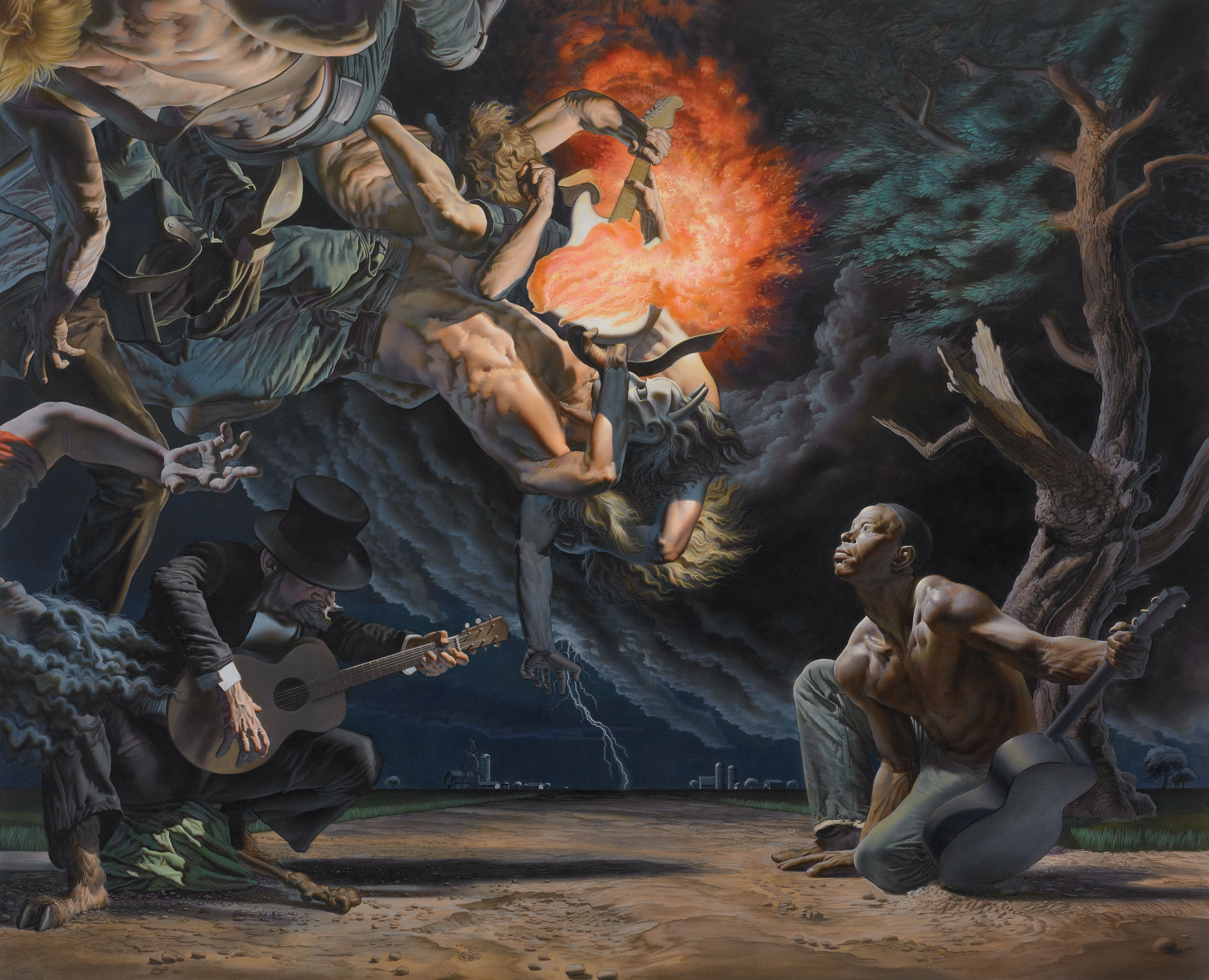 <large> Mississippi Grindin' Gears Johnson is the Robotic Blues Devil, He holds a Juris Doctorate in Faustian Contract Law from Ole Miss. He is the king of the demonic blues kingdom of Mississippi. Mississippi Grindin Gears is more then willing to meet with mortals, he rides on a cart pulled by a donkey along long deserted highways, playing the blues the whole way there, he will meet mortals in order to make a bargain for fame and talent.

The story of Grinding Gear's creation is mostly unknown. It is known that he was created and raised in the swamps of the Mississippi Delta. It was there that he learned how to play a variety of instruments including (but not limited to) the fiddle, banjo, harmonica, jug, and washboard. There he also earned his doctorate in Faustian Contract Law. The legends say that he used his charming talents and wit to challenge the devil, the manifestation of all evil in the land to a fiddle contest. Grinding Gear's came out the victor, and in accordance with the terms of the agreement regarding the prize for the winner of the contest, the master of evil handed over all powers and responsibilities that his title held to Mississippi Grinding Gears Johnson.

After the infamous fiddle contest, Grinding Gear's spent decades traveling the world, bargaining with sinners for their souls, and of course working on his already masterful blues craft. Sightings of him were rare, but those who claimed to have been visited by him say that he took the form of a metal man carrying a variety of instruments and a spotted cloth bindle. Upon seeing the mortal, he would offer them deals. Wealth, riches and power for the price of their soul. However, the loss of their souls would result in complete control by Grinding Gears.

Late into his life(?), Grinding Gears heard a rumor about a large discovery. The source of all magic in the world. He met a party of other travelers who had other plans of how they wanted to use this source of all magic. After going through many trials to prove themselves worthy, they all found their way to the magical "Forge of the World" hidden deep in the tallest mountain. There, Grinding Gears left his physical form behind and became the omnipotent deity and evil patron saint of the blues.

He now watches over the mortal plane, rewarding those who follow in his footsteps of making cunning deals, playing soulful blues, and seeking power.

Legends say that if you're travelling through the swamps of the Delta, you can still hear him tickling the ivory or plucking his strings.

Followers are encouraged to spread the message of sorrow to as many people as possible, "give em' the blues". Followers are discouraged from making decisions that would result in a happy life, once you have accepted Grindin' Gears into your life your life should become a downward spiral.

The only clergy in this church are blues men, men and women who travel the world spreading the sorrow. Worshipers are few and far between, players are more likely to find Grindin' gears worshipers in seedy taverns then any house of worship. Members of the Clergy should take ranks in Profession Lawyer, and perform the blues, for a Cleric of Mississippi Grindin Gears Johnson these are always Class skills.

If a DM includes Mississippi Grindin Gears in a game he will likely be there to make a Faustian Contract, players can make a Faustian Contract with him, he will meet them at a crossroads out on a deserted highway, the player will sell there soul to this robo-demonic blues god in order to become great musicians, the standard Contract is the 27 club contract whereby the player will attain massive fame and fortune, but die at 27 to become an eternal demon notary, a number of famed musicians have taken this contract including: Jim Morrison, Jimmi Hendrix, Robert Johnson, Kurt Cobain, Janis Joplin, and Ron McKernan. Players are able to try and argue a better contract, however DMs are encouraged to make up their own contracts and make arguing with Grindin Gears have a very high DC.