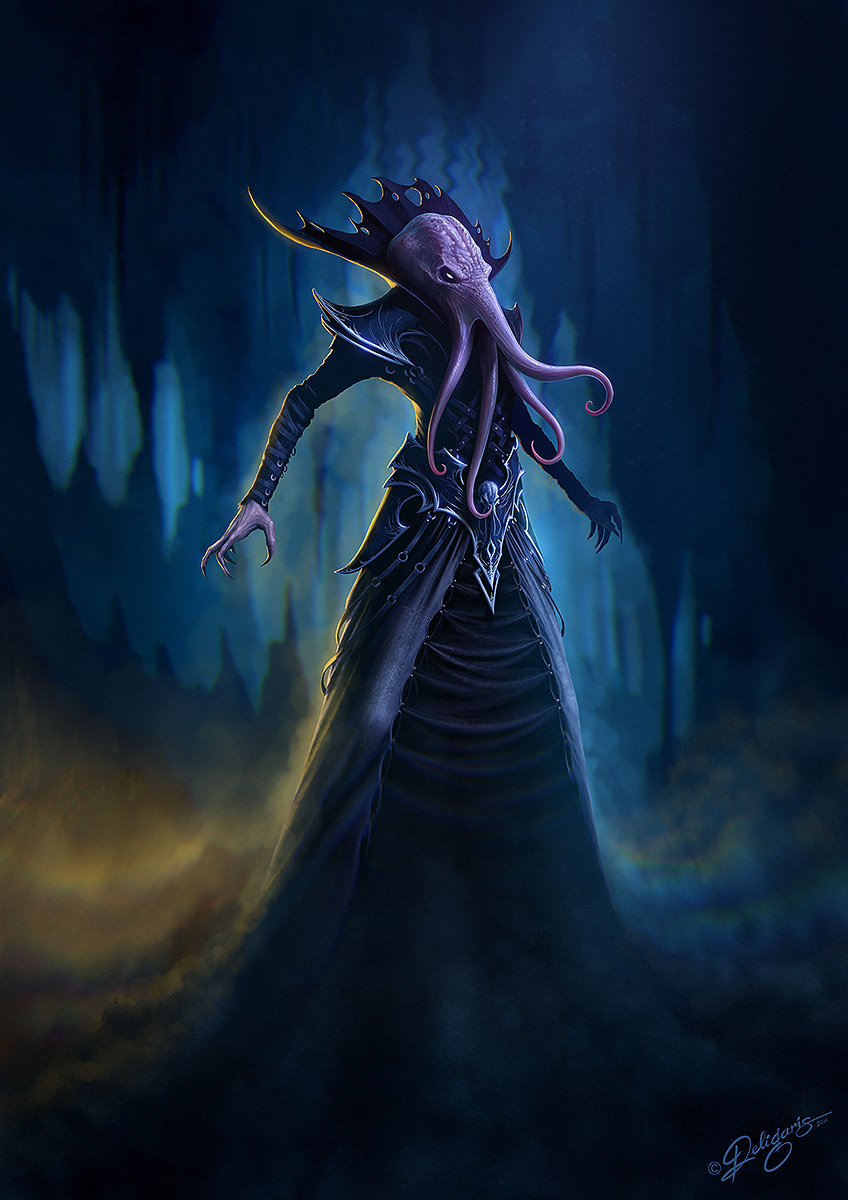 A frightening, hideous humanoid-shape stands proudly, with long, writhing, feeling tentacles protruding from its head, covering its apparent mouth-hole, glimpses of circular rows of teeth revealed with each motion. Seemingly lifeless, piercing eyes read and track not only your every movement, but your every thought.

Mind flayers, or Illithids, are bizarre, intelligent creatures that feed mainly on the sentient brains of others (with deadly efficient use of their mouthparts and tentacles). From unknown origins, these aberrations maintain a mysterious and fundamentally unknown set of mental links and understandings with one another. As individuals, they consider themselves far superior to that of normal humanoids, and effectively claim to be the highest form of life in existence. With psionic abilities and mind-altering abilities, they are often found with thralls or otherwise enslaved beings of other races, and will use said minions to feed on, or to procure more sentient brains from nearby civilisations for food. Most Mind Flayers have a telepathic link, and deep understanding of each other, almost akin to a hivemind, and are theorised to be in tune with a being known as an Elder Brain, a central source of mental communication and thought; But many forms of existence are available to them. Illithids mainly live in caves and other underground lairs, spending time in communion with psionic phenomena from beyond.

Illithids with different composition, and different tendencies, who are more focused on material and arcane interests, as well their individuality, are instead classified as Alhoon.

Mind flayers are stubbornly unafraid in battle, aloof enough and unwilling to see most entities as a threat. They will often first send in any thralls or slaves, by telepathic means, and will often have them deliver prey to them; Or, if said thralls fail, they may feed on, or attempt to enthrall their new prey (assuming they are humanoid).

Tentacles (Ex): When the mind flayer hits a creature of size Huge or smaller with its tentacles, it can attempt to start a grapple as an immediate action without provoking an attack of opportunity. If it succeeds at establishing the grapple, its tentacle takes firm hold of the opponents head. If a mind flayer has one or more attached tentacles, it can attempt to grip with another tentacle, as an immediate action with another grapple check. The mind flayer gains a +2 circumstance bonus to its CMD and CMB for the purposes of establishing and maintaining the grapple for each tentacle attached, up to six tentacles.

Mind Flay (Ex): A mind flayer with three or more tentacles gripping an opponent's head can, as a full-round action, attempt a final grapple check to remove and consume the opponent's brain, instantly killing that creature. This ability is not effective against plants, elementals, constructs, oozes, undead, or foes with multiple (or without any) heads.

Mental Boom (Su): Inflicts severe mental anguish and pain. Targets a circle of radius 30ft., centered within a range of 50ft. from the mind flayer. Anyone inside the area must make a will save (DC 19), or suffer from the effects of confusion for 2d6 rounds. For the purposes of racial immunities, this is a mind-affecting spell.

As a playable race[edit]

Most mind flayers are casters, often arcane, such as wizards.

Half Mind Flayer is a template for a humanoids except to humans, humans transfor into a complete Mind Flayer.