Cunning and deadly, an aberrant race of deadly villains and glorious leaders.

Mind Flayers, also known as Illithid, are monstrous a race of aberrant psionic humanoids ruling in the Underdark. they are feared even by other evil races such as Drow and Aboleth.They believe themselves to be the dominant species of the multiverse and enjoy using other intelligent creatures as thralls, slaves, and chattel. Powerful psionics and cunning fighters, Mind Flayers follow their goals with diabolical cleverness.

Play as a Mind Flayer if you want: 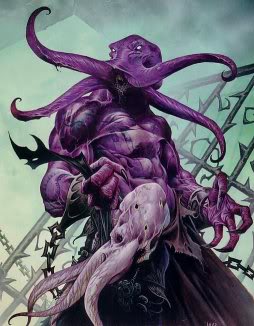 An average Mind Flayer is a thin but strong (and sometimes muscular) humanoid with long arms and legs, has a squid-like head with four prehensile tentacles and a lamprey-like mouth. Their eyes are pale white, and see perfectly in light as in darkness. Their sense of hearing is slightly poorer than a human's; they have difficulty distinguishing between several sounds mixed together. Their slippery skin can be pale gray, grayish blue of dark purple. Even if it isn't dangerous for them, Mind Flayers ferociously hate sunlight. The most horrible thing about Mind Flayers, except their deadly psionic powers, such as mind control, is their diet: they need to devour brains of sentient creatures, using their tentacles to slide into the prey's head and extract its brain. Even if they have masculine or feminine personalities, Mind Flayers are hermaphrodite and spawn tiny larvae, who live in the Elder Brain's pool for 10 years. Those who survive are implanted into a humanoid's head, and upon being implanted the larva grows and consumes the host's brain, absorbing the host's physical form entirely and becoming sapient itself, a mature (but still young) Mind Flayer. This process is called ceremorphosis. Sometimes, experiments with non-humanoid hosts are made, but ceremorphosis involving other creatures usually fails, killing both host and larva; but if it works, terrible abominations can be created. All Mind Flayers share their spite for Drow and Giths, and absolute hate for undead. Illithids live for well over 200 years, their legacy long outlasting them.

Most illithids are nothing but malice, spite and dominating forces in the world. They came from the Far Realm long ago and now reside largely in the Underdark. Illithid society is a free-for-all, with very little structure or hierarchy. Illithids commonly kill each other and devour each other for no other reason than pure sport. Parents abandon their young immediately after "birth". An illithid must make its own way through a hard, cruel and bitter existence.

However, maybe once or twice throughout all of the world's ancient history, a solitary illithid has broken from the sadistic traditions of its race. Illithids are viewed with fear and animosity, and not without reason. Many races have a deep-rooted hatred of illithids and all that they stand for. Therefore, an illithid that has broken from its kind will face a great deal of hatred and anguish directed at it as it ventures into the world. A solitary illithid is most likely attacked on sight in most civilized societies. Most illithids detest the name Mind Flayer, growing wildly irate at its mention.

Perhaps the illithid was contacted by a god to fight in its cause, or perhaps ran across a mystical spell book which inspired it to find a new path for itself. Whatever its reason for adventuring, it must develop its own set of values and ethics, which a typical illithid lacks entirely.

Illithids can use their transliterated Deep Speech names, but some who have forsaken their heritage translate their names into Common or another languages.

Xallibossk is a Mind Flayer Swordmage. While a Gith attack was ravaging its city, it was completing the ceremorphosis, and the Elder Brain assigned it to become a blade master. after focusing its power, Xallibossk made itself a name in Gith society as it rushed into a monastery, overpowering many Githzerai monks with its serrated cutlass and mind-controlling the grand master in butchering his own students.

Quasthelid is a Mind Flayer Wizard, well-known for have been an acolyte in many arcane sects which himself destroyed by feeding off of the master's brains, getting the knowledge of many interesting spells.

Methil is a Mind Flayer Scion. he was captured by drow raiders to be used as a slave by a high matriarch...eventually, it became her best secret counsilor, using his knowledge of alchemy to manipulate and poison her enemies. As it earned her thrust, it fed off her brain and made of her a thrall, eventually manipulating the drow army into a tremendous ambush and defeat.