Wikipedia has an informative article on The Mesoamerican Ballgame. I do not claim historical accuracy in these rules, as the original rules are not entirely known.

This skill is only used while playing the Mesoamerican Ballgame (and it is only a class skill for an Aztec Warrior. Using this skill, you can do an action with the ball.

Check: The ball must pass within an arm’s reach (generally within the character’s 5ft square) to make a check.

Action: In most cases, it takes a standard action to hit the ball once, though this can vary. 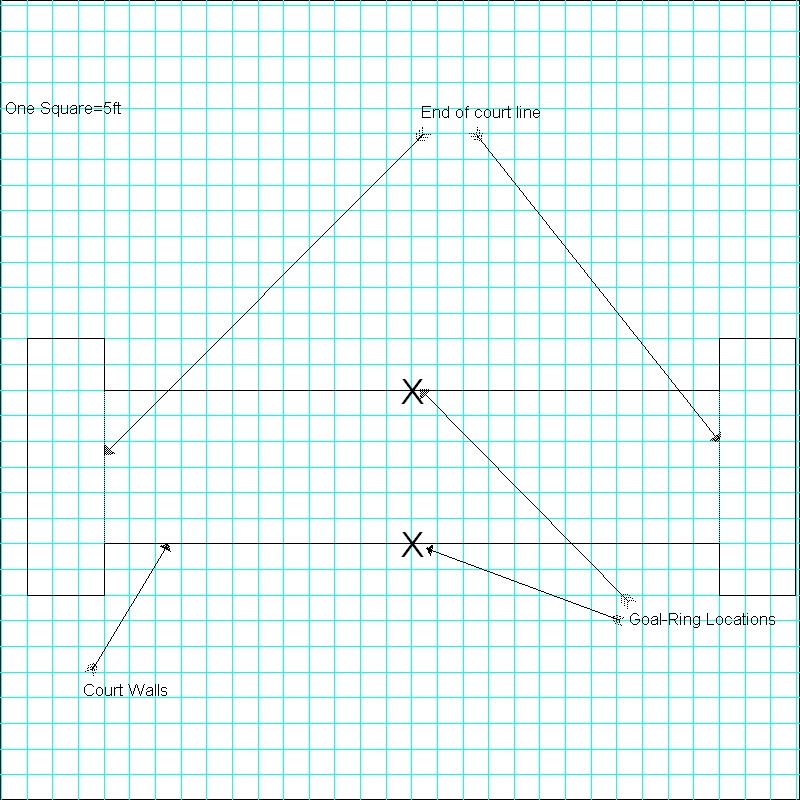 The Mesoamerican Ballgame uses the same rules as general combat, with the following exceptions:

The players involved start at opposite ends of the court, within 30ft of the end of court line (where the main section contacts the “I” section). Obviously, the teams start at opposite ends of the court. Then roll for initiative. One team (chosen by a random means, such as a coin flip) starts with the ball. The team that has the ball chooses one player on their side to start with the ball, who must immediately pass the ball to an opposing player- see “passing the ball”.

When a player receives the ball, they must pass it to an opposing player or shoot at the goal ring. See “Scoring” for details.

The first player to pass the ball must take a DC 20 Mesoamerican Ballgame skill check (herby referred to as “ball skill check”) of DC 10. Place the ball marker2 between the target and the player who made the pass (in a strait line). If the check was failed by 5 or more, the ball does not bounce, and remains on the floor (see “taking the ball out of play”) If the check was failed by 1-4, treat the ball as a thrown weapon that missed (see “failed passes”). If the check is passed, the pass is received on the target’s next action. It can be intercepted (see “intercepting a pass”). If the pass is received, then the player that receives the pass must pass it to an opposing player or attempt to score as a standard action. If the ball is passed, follow the procedure outlined above, but increase the DC by 2 (this is cumulative).

If the pass is failed, the ball’s target space is changed according to the "Missing with a thrown splash weapon" rules. The ball is placed between the new target space and the passing player as if he where passing to a player in that space. At the end of the round, the ball will reach this space if it is not intercepted (see "intercepting a pass"), and there is no player in that space to receive that pass, the ball is assumed to have bounced twice (see above).

A player may intercept a pass by moving in between the ball’s location after it was passed and the target’s location, before the ball is received. They must then make a Ball Skill check to pass the ball to an opposing player or to score (they must designate which). The DC required is the DC to score (if attempting to score, see “scoring”), or the DC to pass the ball (if attempting to pass the ball, see “passing the ball”). Either way, the DC is increased by 2 (this is cumulative with the DC increase for previous passes, and remains for all subsequent passes). If the check is failed by 8 or more, the interception fails. Otherwise, failed checks result in the usual consequences. This uses an immediate action.

Passing to Your Own Team[edit]

If a player passes the ball to a player that is on their own team, that player’s team looses a point and the ball is taken out of play (see “taking the ball out of play), unless the player who is receiving the pass attempts to score. If the attempt to score fails, however, that player’s team looses an additional point (in addition to the one point penalty for failing to score, see “basic rules”).

Taking the Ball Out of Play[edit]

When the ball is taken out of play by a team, the players return to within 50ft of the end of the court, and the opposing team starts with the ball. Play continues as detailed in “playing the game”. The team that caused the ball to go out of play takes a one-point penalty (see “basic rules”).

You may be wondering the point of all this by now, but those who remember the “basic rules” section may recall that the rules do allow assault and murder. So, the game is basically glorified combat. So long as neither team conforms to any “honor” and “sportsmanship” ideals, the game should work well, but all players really should be Aztec Warriors.

DM unable to turn up for a session? Don’t want to go home without that D&D action? Or perhaps you want to amuse yourself with a go at the Mesoamerican Ballgame? Have I got a game for you!

A points match consists of a standard game with teams of equal size, made up with a number of players with a maximum limit to the level of each player and the total level of all players in a team. The points cost of a player determined by level is summarized on the table below:

When deciding the points cost, decide how many players will be on each team, and the maximum level of any one player that takes part in a game, then consult the table below:

1. The word "player" is used to refer to a character who is playing the Mesoamerican Ballgame.
2. During play, you should use a battle-grid to represent the locations of the players, ect. Use a marker to represent the current location of the ball on the grid.
3. Count feet along the ground to the location underneath the goal-ring, rather than through the air as you would ordinary.