Snake people with a menacing gaze and an affinity for poison. 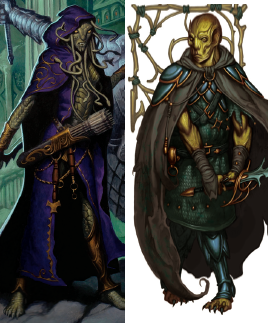 Created by the evil god Zehir, Medusae are the wicked combination of man and snake.

Play a Medusa if you want...

Medusae are roughly the same height as humans. Their bodies are slimmer but more athletic in build. The skin color of a Medusa can be any color. They typically have a darker color on the outerside of their skin and a lighter colour on the innerside of their skin, much like a snake. The most common skin color is light green on the outerside and golden yellow on the innerside. Male Medusae cannot grow hair anywhere on their body. Female Medusae cannot grow hair, but instead they have a living nest of snakes that extend from their scalp. They are under the control of the Medusa, so it is up to her to decide how aggressive they are. A Medusa's ears are not protruding like other humanoid races and instead are concave. Medusae tend to age a bit faster than other races, reaching adulthood at 15 but slows down tremedously afterwards. Many Medusae do not feel the effects of age until they are nearly 120. Some have been known to reach the 150 year mark.

Once cave dwellers that preyed on passing adventurers, Medusae have stepped from their former isolated selves and now the lure of wealth and power has placed some Medusae in positions of leadership. Many live their lives as self-proclaimed nobility, much like vampires, as none are brave enough to venture past the garden of statues to meet their rulers face to face.

The Medusae say that they are creations of the god Zehir, and find comfort in the presence of their fellow serpents such as the Yuan-ti, whom they hold in high regard. Medusae can have offspring with humans but because of their toxic blood, their children will always be Medusae.

Medusae do not have a society of their own to call home except for the sparse collection of noble families that live in isolated villages and large cities. Medusae can be greedy as they seek to claim high positions and prestige but show great respect to those of equal or greater status because they know how dangerous it can be to be a ruler with no loyal followers. Despite their forked tongues, Medusae have an extraordinary social ability; the ability to talk their way out of a situation or persuade someone to follow their will. This is the primary reason why they have claimed nobility. The Medusae population is quite small, as they are normally treated as monsters by villagers and farmers. However, recent introduction into nobility has caused their population to increase, though not dramatically.

The great majority of Medusae worship Zehir, as he is their creator. However, good hearted Medusae have found favor in Erathis and Moradin as Medusae culture is based on order and hierarchy. In combat, Medusae use their stealth or tongue to avoid trouble, as their race is few in number as it is. If combat is unavoidable, they prefer quick strikes rather than an all out frontal assault.

Male Names: "S" heavy names such as Sabas and Seth

Seth is a Medusa Ranger. With his bow and swords he hunts those who are responsable for murdering his sister. Using his incredible stealth, he has managed to sneak into a noble's bedchamber and get a lead as to the whereabouts of the murderers thanks to a little persuasion and a blade to the noble's throat.

Saara is a Medusa Rogue. She disguises herself in a hooded cloak and lures unsuspecting victims using her soft voice and amazing beauty before turning them to stone. She is a member of a thieves guild but she is not content to being ordered around and dreams of creating a vast network of thieves with her at the helm.

Silva is a Medusa Sorcerer. She was nearly killed and burned by villagers if it were not for a passing human warrior. Surprised by the empathy of the warrior, she now follows him, hoping to discover the nature of man and expand her arcane power.

When your medusa character gains a class utility power after 1st level, you can forgo taking a power granted to you by your class. Instead you gain a medusa utility power of the same level or lower.