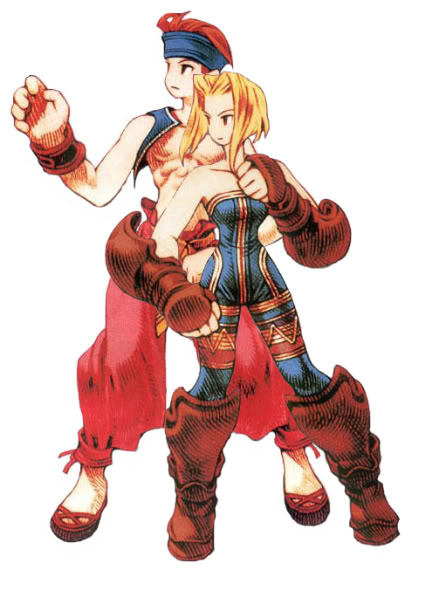 A pair of Master Monks; Truly, a rare sight.

Devoted entirely to the perfection of themselves and their arts, Master Monks are beings who are less concerned with right and wrong, so much as how they might enforce them. Their art matters most, for without it, they cannot justify or defend anything else.

Master Monks are one of the highest disciplined practitioners of the Martial Arts, and are ferocious forces of nature. They use a prowess known as Punch Art in order to strike their enemies from afar, deal unseen damage, and even heal their allies. Truly, Master Monks are a force to be reckoned with.

Generally, Dexterity and Wisdom are attributes that a Master Monk finds useful. These let the warrior weave in, and avoid attacks while striking back at his foes. Strength and Constitution are also useful, providing the Monk a way to deal and take damage in stride.

Master Monks wield power as a direct result of a lifetime of honing their body into the perfect fighting machine. In some cases, this power is also delving into the depths of their souls, using Ki in order to empower them.

Training (Ex): Your class levels of Master Monk counts as levels of Monk for the purposes of determining Unarmed damage and Movement Speed.

Punch Art: The Master Monk channels both his inner Ki, and his finely honed body simultaneously, resulting in massive and versatile abilities not capable by normal beings. Some of the Punch Arts are offensive, while others manage to be entirely supportive. That said, the Master Monk is not a Barbarian, nor is he a Cleric, and therefore, these abilities are sometimes not as effective as their counterparts. In cases where your Master Monk level is added to damage, you may consider all levels of Monk that your character has, as Master Monk levels, as well.

Cyclone (Ex): When surrounded by foes, you take the chance of striking them all, in a single, powerful blow. You must roll a single melee attack with either your unarmed strike or a monk weapon, regardless of how many base attack bonus you have. Match your result with each appropriate AC of any opponent within your threatened range. You deal damage equal to 2d6 + Your Master Monk Level. Your reach with this attack is equal to the reach of your weapon, if any, or unarmed strike. If using a reach weapon, you deal damage to all those within your reach, as well.

Pummel (Ex): As the Flurry of Blows class feature, except that the action is standard, it follows it's own progression, and the Master Monk may only concentrate his attacks upon a single adjacent target, seeking to simply overwhelm them in combat. This action cannot be used with any special move actions, such as those granted by feats (I.E. Spring Attack. When using Pummel, you deal an additional amount of damage equal to your Master Monk level, as well as any levels of Monk you may have acquired.

Aurablast (Ex): By channeling his Ki energy, the master monk can strike even the farthest of opponents with his mighty fists. The monk may take a standard action to attack any opponent within 30 feet, and treats the attack as magical for the effects of overcoming Damage reduction. In a case where a Master Monk has previous levels in the Monk class, the Ki Strike ability determines the attacks type, overriding the above statement.

Chakra (Ex): This functions as the Wholeness of Body class feature of the Monk class, except that you may instantaneously heal yourself and any immediately adjacent targets within touch range. This is, also, a full-round action.

Purification (Ex): A Master Monk can utilize the intense powers of his Ki and his own wisdom to seek out impurities and destroy them. As long as he is in contact with one target, the Master Monk may roll a Fortitude or Will save for the target to cancel and negate the effects of any poison, corrupting spell, such as Polymorph, or similar negative statuses.

Counter (Ex): A Master Monk has learned to move with combat, to retaliate swiftly and powerfully. When attacked in melee range, the Master Monk may roll a reflex save (DC 10 + Enemy's HD + Enemy's DEX) in order to respond to the attack while his opponent is vulnerable. If he succeeds, he may roll to attack the target. This action can only be preformed in melee and is considered an Attack of opportunity.

Revive (Ex): Using his Ki in a restorative fashion, the Master Monk can give any recently dead target (subject to the same deadlines as Raise Dead) within touch range a sort of 'Ki Infusion', and possibly return them to life. The chances of resurrection are equal to a d% roll of 30 + Class level + WIS modifier or lower. If resurrected, the target returns with 1d8 hit-points restored.

Doom Fist (Ex): This functions as the Quivering Palm class features, except that if the creature succeeds the initial save, it must make the save twice more at the end of it's next two turns.

Shockwave (Ex): Summoning all the Ki and Strength he has, the Master Monk can attempt to rend the very earth beneath him. By taking a full-round action, he can slam his fist unto the ground, erupting a shockwave along a 60 foot line. This attack acts as a Breath Weapon, dealing 6d6 force damage to anything within it's path of destruction, also forcing those damaged to make Balance Checks, or fall prone. Like most breath weapons, all subject to the attack may make reflex saves to take half damage. Furthermore, the attack is only made in contact to the ground. Any airborne targets, or those not immediately near the ground, are considered unaffected.

Hamedo (Ex): This ability replaces Counter, learned earlier. The Master Monk has perfected his art so much that he now recognizes his opponent's moves before they themselves do. At the slightest inclination, he can strike to parry his opponent's blow, avoiding all damage, and attack within the same moment. The Master Monk may roll a reflex save (DC 15 + Enemy's HD + Enemy's DEX) in order to do this, though he takes a -2 penalty to attack rolls made in this strike. This action can only be performed in melee and is considered an Attack of opportunity.

Master Monks who have given up their art and pursuit of perfection, for whatever reason, may keep all levels and features of this class, but may no longer achieve levels in it, symbolizing an inability to reach the path they once walked, by mental barriers or otherwise.

Master Monks in the World[edit]

NPC Reactions: Most characters regard Master Monks as just that: Masters of their orders, arts, and practices. They are considered with the greatest of admiration, even though in hushed tones, and are often romanticized in tales or novels as grand adventurers, capable of slaying the mightiest foes by strength of body, will, and discipline alone. That said, they are subject to exaggeration, and most other people are disappointed when a Master Monk refuses to show off his more deadly or showy techniques, instead reserving them for necessity. That said, they are equally astounded, if and when a Master Monk is forced to release the power within.

Characters with ranks in Knowledge(Local) can research local orders and monasteries, to see if Master Monks are nearby, and to learn more about them. Master Monks are far a few, and thus, can usually only be found through word of mouth. When a character makes a skill check, read or paraphrase the following, including information from lower DCs.