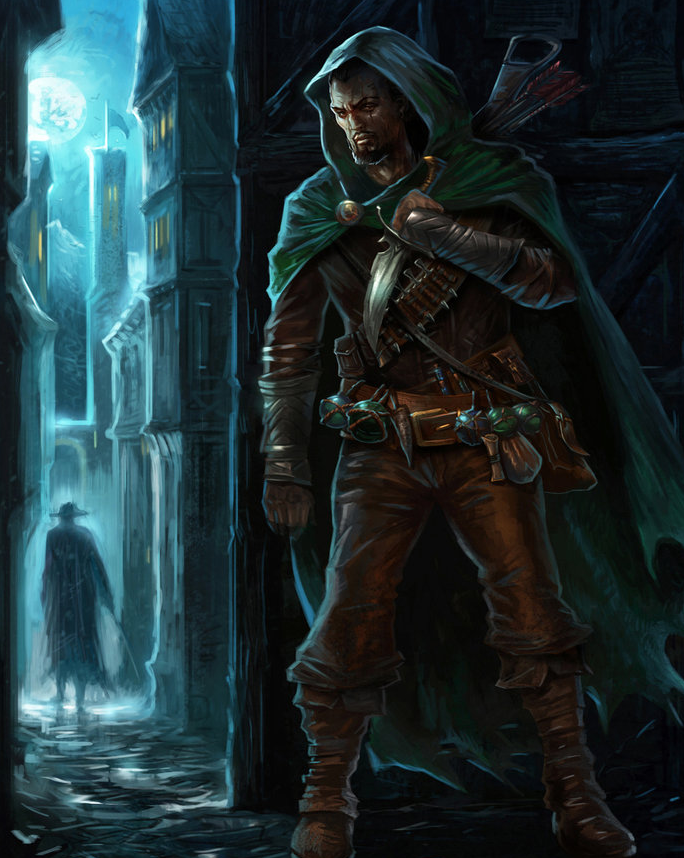 A mandrake waits for the perfect moment to strike. Art by Sabin Boykinov.

Mandrakes are assassins who specialize in using poison to get the job done. They even gain venomous natural attacks as their body absorbs the deadly chemicals they work with so often.

Mandrakes are support fighters. By flanking opponents in combat they can make use of their sneak attacks and apply toxins to their enemies. These do damage over time.

Abilities: Dexterity and Intelligence are the two most important skills for the mandrake. Dexterity helps their stealth and ranged attacks, while Intelligence affects their poisons' save DC's. Constitution can be useful for survivability, while Strength, Wisdom, and Charisma aren't necessary.

Races: The path of the mandrake is open to all races, but drow are particularly fond of this class.

Alignment: Mandrakes lean toward Neutral or Evil, but any alignment is allowed.

All of the following are class features of the mandrake.

Weapon and Armor Proficiency: The mandrake is proficient with Light Armor and all Simple and Martial weapons, as well as 3 Exotic weapons of his choice.

Poison Use: The mandrake is trained in the use of poisons. He suffers no chance to poison himself while applying poison to a weapon.

Toxins: The mandrake may take an hour to produce a number vials of toxin equal to his Intelligence modifier. Each vial is good for 5 applications of the poison. The enemy is entitled to a Fortitude save to avoid the effects of the toxins. The DC is 10+ the mandrake's class levels+ the mandrake's Int modifier.

Basic Toxin: Deals 1d6 + Mandrake Int modifier damage every round for a number of rounds equal to the mandrake's Intelligence modifier.

Intermediate Toxin: Deals 1d8 + Mandrake Int modifier damage every round for a number of rounds equal to the mandrake's Intelligence modifier.

Advanced Toxin: Deals 2d6 + Mandrake Int modifier damage every round for a number of rounds equal to the mandrake's Intelligence modifier.

Expert Toxin: Deals 2d8 + Mandrake Int modifier damage every round for a number of rounds equal to the mandrake's Intelligence modifier.

Masterwork Toxin: Deals 4d6 + Mandrake Int modifier damage every round for a number of rounds equal to the mandrake's Intelligence modifier.

Poison Resist: The mandrake regularly ingests small amounts of poison in order to build up an immunity. This confers a +2 bonus to saves against poison.

Weapon Finesse With a light weapon, rapier, whip, or spiked chain made for a creature of your size category, you may use your Dexterity modifier instead of your Strength modifier on attack rolls. If you carry a shield, its armor check penalty applies to your attack rolls.

Hide In Plain Sight: The mandrake can use the Hide skill even while being observed. As long as he is within 10 feet of some kind of shadow, he can hide himself from view in the open without anything to actually hide behind. He cannot hide in his own shadow.

Poison Immunity(Natural): By this point in the mandrake's career, he has ingested enough natural poisons to become immune to all non-magical poisons.

Toxic Spittle: The mandrake's saliva is now incredibly venomous. He can spit at an opponent and deal 1d4 damage with a chance to blind. (Fort negates). The spittle can be used once every 1d4 rounds with a range of 10 feet.

Evasion: A mandrake can avoid even magical and unusual attacks with great agility. If he makes a successful Reflex saving throw against an attack that normally deals half damage on a successful save, he instead takes no damage. Evasion can be used only if the mandrake is wearing light armor or no armor. A helpless mandrake does not gain the benefit of Evasion.

Backstab: The mandrake gets a +2 bonus on attack rolls while making a Sneak Attack.

Improved Uncanny Dodge: A mandrake of 7th level or higher can no longer be flanked.

Poison Immunity(Magical): The mandrake is now immune to magical poisons.

Tumbling Dodge: Once per round, when the target of an attack, the mandrake can substitute his AC for a tumble check.

Improved Evasion: Improved evasion is like Evasion, but even on a failed saving throw the mandrake only takes half damage. A helpless mandrake does not gain the benefit of Improved Evasion.

Ranged Sneak Attack: The range at which the mandrake may perform a sneak attack is increased to 60-feet.

Breath Weapon (Ex): The mandrake can spit a 20 foot line of acid.

Ranged Death Attack: The mandrake is now able to perform a Death Attack at a range of 30 feet.

Vicious Backstab: The mandrake's bonus to sneak attacks increases to +4. Additionally, they can choose to have their sneak attack cripple the opponent, cutting their movement speed in half. (Fort negates)

Tumbling Dodge(2): Allows for an additional use of the ability.

Quickened Death Attack: The mandrake may perform a Death Attack after only two rounds of study.

Mandrakes suffer no penalty for multi-classing.

Sneak Attack: This class feature continues to progress into the Epic levels.

Bonus Feats: The epic mandrake gains a bonus feat every 2 levels after 20th.

Religion: Mandrakes typically don't favor religion, but some may worship gods of death.

Other Classes: A mandrake doesn't innately have any strong feelings toward other classes. He does, however appreciate the martial classes' ability to take hits for him while he moves into position to apply poison.

Combat: In combat, the mandrake is always moving to flank his opponent. From this position he can deal the most damage and apply his poisons relatively unhindered.

Advancement: Most mandrakes don't have a reason to multi-class. Veering away from the mandrake path slows the rate at which they gain access to their most virulent toxins.

Mandrakes are typically found in the more shady parts of cities, but their skill in poisons requires a specialized education, either via schooling, a mentor, or years of experimentation.

Daily Life: A mandrake spends a good portion of his day brewing his special poisons. A mandrake assassin will spend hours studying and following his next target. A traveling mandrake blade-for-hire will pause in towns to look for contracts, in seedy alleyways or the corners of taverns.

Organizations: While mandrakes don't have a specific organization they belong to, they've been known to join groups associated with assassination. Some are a part of Mafia-like families or death cults. Others attend universities studying botany or chemistry, refining their poisons under the guise of academic curiosity.

NPC Reactions: Mandrakes usually keep their profession a secret, because authorities tend to arrest assassins. When common folk do find out who a mandrake assassin is, he is usually avoided for obvious reasons. Should the mandrake be a mere sellsword, however, he is treated no differently than any mercenary who uses non-poisoned blades.

Mandrakes in the Game[edit]

A mandrake is a great addition to the party in the form of a rogue-like damage dealer and skill monkey, or he can make for a very deadly antagonist to the players' adventures.

Adaptation: A mandrake could be a tribal hunter-warrior who uses blow darts or poison-tipped throwing spears. In a more modern or futuristic setting, his poisons could be electrically-based instead of nature-based so they can damage robots or cyborgs. Give him taser projectiles instead of toxic spittle with a chance to stun instead of blinding, and give him a taser with a line of electricity instead of a line of acid breath attack. Yet another adaptation is to have the mandrake be of a reptilian or plague-riddled rodent race, with his poisons applied to natural bite or claw attacks.