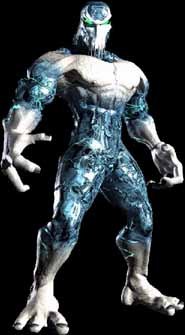 Glacius, from Killer Instinct, for Aesthetics!

Born the mistake of magic, divinity, or engineering, the Malleas are a race of humanoid elementals. [1] are even more gifted than the normal Malleas.

Malleas function as most humanoids do, they seek creature comforts, and what works for their own survival. Though they are strong, and intelligent, most Malleas tend to seem somewhat ignorant to their own needs, so they tend to live the life of wanderers, not knowing any better.

Malleas as a whole tend towards the fair average of 5'6" to 6'1", and rarely are they more hefty than bulky due to their special nature. Malleas are crystalline-skinned in nature, and often appear to be humanoids made out of glass, though the gifted Malleasan's body emanates the elemental energy they are gifted with like a skin-color, wheras their eyes are just deep pools of energy, whether it be blue, green, red, purple, black, or white. Malleasan, being a strange race, create their own gender identities, and as such function as a race of hermaphrodites.

Malleasan are freshly created, and as such, are a thing of wonder and mistrust. While they usually are not treated in hostile manner, some are misunderstood, or hunted for differing reasons.

A Malleas comfortably finds itself amidst any alignment, though few tend towards Lawful as they do not quite yet understand what it is to pass law over another. Most are Chaotic Neutral.

Malleas prefer climates directly associated with their birthed elemental nature, but can grow comfortable in most any area. They are a hardy, and adaptive race.

Malleas have no organized religion, but find themselves swayed gently into the divine, and unholy pantheons, though it's more in regard to a personal relationship for the Malleasan than others would perceive.

Malleasan have an interesting naming system, Malleasan combine both the love of gnomes for names, and a special naming rite to create some of the most diverse names most beings share. The Rite of Naming ensues when a Malleasan is born, or created, and ends when they finally die, or expire. A Malleasan who dies by a name is considered to have been blessed for their journey to the plane of the element they embody. As such, Malleasan have a variety of names gifted to them by friends, creators, or even themselves, and as such, they can mimic most any race's naming style.