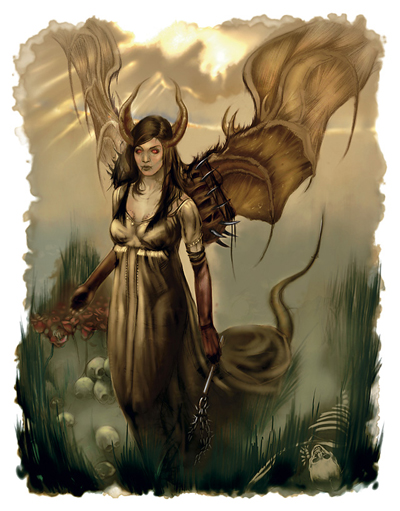 Malcanthet is a demon lord. She is also called Queen of Succubi.

Malcanthet is described as an incredibly beautiful human-like female with bat-wings, horns, and a long prehensile tail tipped with a spike-like stinger.

Malcanthet is the current holder of the title of Succubus Queen; other demon lords aspiring to the position include Lady Lynkhab, the currently imprisoned Shami-Amourae, and the exiled Xinivrae. Other rivals exist elsewhere in the Abyss, but they ultimately pose little or no threat to Malcanthet.

Malcanthet was among the first of the succubi to come into being in the Abyss. She obtained her current title after years of waging wars and committing savage betrayals upon her fellow "sister" succubi and former paramours. As a result of her ruthless climb to the top, she has cultivated a long list of enemies, which includes Graz'zt, Yeenoghu, and Baphomet. Her few allies include the Prince of Demons Demogorgon, with whom she birthed the monstrous Arendagrost; Pazuzu, from whom she mothered the succubus Red Shroud; her current consort Mastiphal the Hunting Sovereign; and Socothbenoth, a demon lord concerned with sexual taboos and perversions.

The Succubus Queen's realm is the 570th layer of the Abyss, and is known as Shendilavri. Once a disgusting layer of heaving and "shuddering flesh", Malcanthet has transformed it into a verdant paradise. But ultimately, it is a paradise for only Malcanthet herself.

The cult of the Succubus Queen is a widespread but disorganized lot. Each cult sees another not as an ally but as competition, and most are little more than simple brothels. Most of Malcanthet's followers are female; those few male cultists are viewed either as lowly servants or convenient muscle power. The Thralls of Malcanthet are exclusively female, and as they rise in power, they gain more and more powers similar to those of succubi until they too, can (temporarily) assume succubi forms.