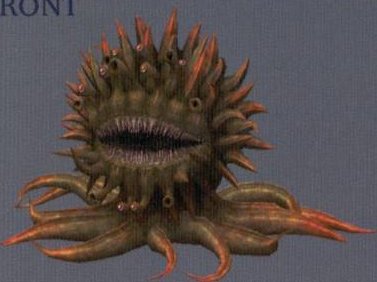 Malboros are horrible plants which grow from spores planted in the most vile sewage pools imaginable. They absorb the surrounding decay's poison and heat, growing into horrible grinning mouths who move on countless mobile vines. They have poor eyesight, made up by the sheer number of eyes they possess, and keen ability to pick up vibrations. Rotting meat makes an excellent meal, and moving too close to a Malboro's sludge pit is bound to draw its attention and hunger.

A Malboro is not too bright, but smarter than the average animal and understands the concept of ambushes. It may position itself to pop up and surprise its prey, chasing it to drive it to its sludge pool or another natural hazard where it can gain an advantage. If taking a lot of damage, it moves to its pit and plants itself to hold its position. A malboro often opens up the fight with its Bad Breath, picking off opponents by whoever is weakest or most dangerous.

DC 15: It is possible that Malboros are in some way related to Otyughs (even though one is an animal and the other a plant), although it is unsure if they are mutated by the evil of the Shadowfell or by the energies of the Far Realms. Unlike Otyughs, that are sometimes kept as guardians, they are avoided by almost every intelligent creature that would dwell in areas that they call home.
DC 20: Malboros seem to enjoy killing any living creature that wanders too close to it's lair. They never devour the bodies of their prey allowing them to rot so they can feed off the corpses with their roots.

Malboros are solitary creatures that live in sewers or other dank areas filled with rot and filth. Their inherently evil natures drive them to build nests near sludge pools or other natural hazards so they can use them against potential prey.