The Maquahuitl was a type of macana, was a common weapon used by the Aztec military forces and other cultures of central Mexico, that was noted during the 16th century Spanish conquest of the region.

The maquahuitl was sharp enough to decapitate a man. According to an account by Bernal Diaz del Castillo, one of Hernán Cortés’s conquistadors, it could even decapitate a horse:

Pedro de Moron was a very good horseman, and as he charged with three other horsemen into the ranks of the enemy the Indians seized hold of his lance and he was not able to drag it away, and others gave him cuts with their broadswords, and wounded him badly, and then they slashed at the mare, and cut her head off at the neck so that it hung by the skin, and she fell dead. 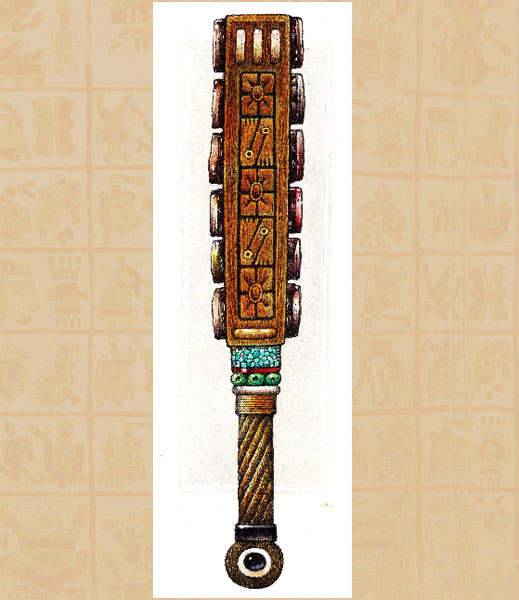 The Macuahuitl is a weapon shaped like a wooden sword. Its sides are embedded with prismatic blades made from obsidian, a volcanic glass stone frequently used for tool making by the Aztec and other pre-Columbian Mesoamerican cultures. It was similar to a large wooden paddle with cuts in the side to hold the sharpened obsidian.

The one-handed Macuahuitl is about 1m long, while the 2-handed version is possibly about 1.8m. The weapons posseses Hardness 5 and 5hp (10hp for the 2-handed), the Macuahuitl gets -2 penalty when trying to hit with non-lethal damage (instead of the regular -4).

If usign the Stone Age Special Rule (See Below) the Macuahuitl has Hardness 8 and 15hp, if the Obsidian Blades are destroyed, it becomes an improvised club, dealing 1d6 points of damage (the non-lethal quality is not lost) and uses the regular rules for improvised weapons.

As a Stone Age Weapon this optional rule could be used: Stone Age Weapons are known for not being as damaging as metal ones and not being very durable, Stone Weapons get a -1 penalty to attack and damage rolls against opponents with Medium or Heavy Armor, also in the case of a critical miss or a critical hit, a Stone Weapons deals damage to itself (only to the Stone Part of the weapon)(Hardness is applied) Stone has hardness 8 and 15hp per inch of thicknes.