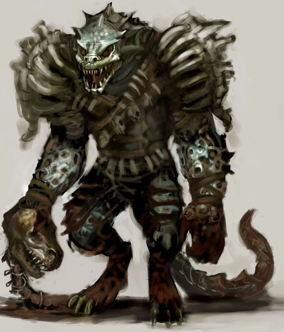 A lizardfolk. It seems there was a disagreement.

This is a lizardfolk variant that makes lizardfolk a viable character to play. It's a fantasy game, if you want to play a lizard you should be able to play a damn lizard.

The Lizardfolk are cold and calculating predators. They don't feel a lot of emotions like we do and example of this is fear they don't actually feel fear as in them getting scared of a ogre. They see the orge as a threat and act accordingly in this cast fight it but if they see a dragon they would retreat away from it.

Lizardfolk exhibit a wide range of height, weight, and physical power, depending on the circumstances of their birth and their desired station in life. They tend between six and seven feet tall, and are generally between 200 and 260 pounds. Their most common scale colors are green, brown, and blue.

The Lizardfolk and the sahuagin, when they meet, tend to not get along. The sahuagin rule the seas, and the Lizardfolk prefer to stick to marshy swamps near the coastlines. However, Lizardfolk are capable of living underwater and some do; when they do they come into constant strife with the territorial sahuagin empires.

Their relations with other races depend on the specific tribes and your campaign, as lizardfolk don't tend to any alignment.

Lizardfolk stick to marshy swampland, usually found near coastlines. However, they often migrate more inland as long as there are marshes and swamps for them to inhabit, and also outwards towards the ocean as they are capable of surviving underwater. They hunt best on land, however. More intellectual lizardfolk can be found in various cities throughout the world.

Lizardfolk religion are as varied as the lizardfolk tribes. This one depends on your campaign and what gods and tribes you have.

Lizardfolk speak Draconic. They also tend to speak the common trade language of the world, Common.

Lizardfolk names always have a lot of Ls, Ns, Rs, As, and Ys. Their first name tends to be one distinct word, but their last names tend to be multiple words, separated with apostrophes. Examples include "Lar Narya" and "Lyna Lyr'Yan'Nya".

Note: Some Lizardfolk survive much longer than their maximum age. This is usually due to some sort of magic or class feature.