The living dead are the re-animated remains of humanoid corpses. They so strongly resemble standard humanoid zombies that even the most seasoned adventurer is unable to tell them apart by mere looks, but there are several very important differences between the two that become apparent once they attack. Living dead are not undead in the standard sense, they cannot be turned, affected by holy water, and are not susceptible to any spells or magical effects that have a specific effect on undead. The virus that animates the living dead appears to only affect medium, or small, sized humanoid creatures for some unknown reason.

DC 20: Living dead cannot be turned or controlled like other forms of undead. Instead they will turn on and attack those that attempt such things with little care for themselves. Living dead draw air into themselves through what might remain of their nose or mouth in order to “smell” their intended victims. As they release the air from their bodies living dead emit groans and wails that chill the blood and have been known to drive some people to the verge of insanity. While living dead are reanimated corpses, they are not undead in the strictest sense. Instead they are corpses that have been given un-life through some form of unnatural disease. Where or how this disease came to be is unknown, many have speculated as to it’s origin; some say a lich or mad wizard created it, some say it is a mutated form of mummy rot, others say it comes from exposure to rocks that fell from the sky, and the list of opinions goes on and on. In the end the origin of the malady matters little, for the result is horrifying and wholly destructive. Living dead are driven by an insatiable need to spread their infection, using what little remains of their Intelligence to reach the living prey they need to carry on their nightmarish plague. Some living dead are able to use minor tools or implements (open doors, smash windows with rocks, etc.), but they are unable to communicate or use weapons in any way. The most terrifying use of their vestigial intelligence is the fact they are drawn to former friends and loved ones as their initial victims, often using the sympathy these people feel for their former acquaintances as a lure.

As a general rule encounter groups of living dead are comprised of 2 living dead shamblers per standard living dead, though DMs are encouraged to tailor encounters to drive their story. Groups of 1 or 2 may be common in some areas while hordes of 100's may swarm a particular town or city. While many encounters will begin with a few living dead, it doesn't take long before the numbers grow as they are drawn to fresh prey. 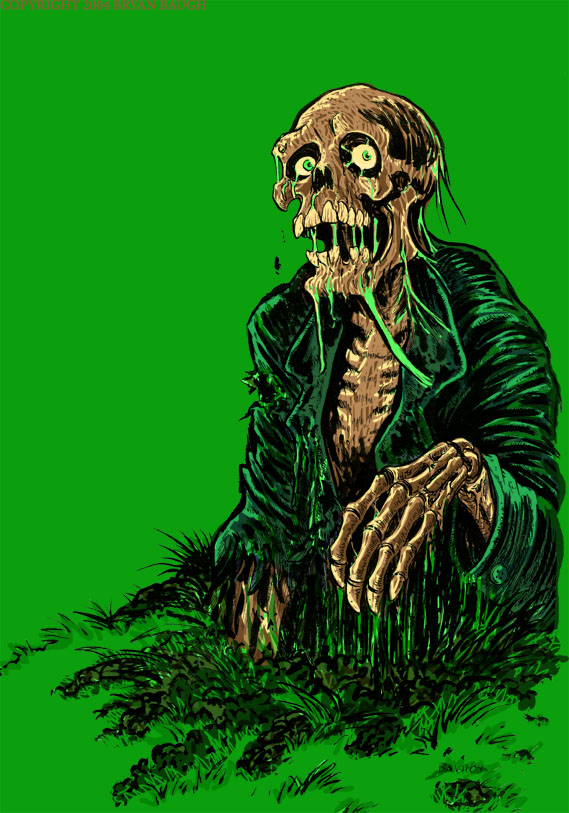 The true horror of the living dead is the infection they carry within themselves. As it grants them a semblance of life, it is a virulent toxin to the already living. While the infection itself is transmitted by even a scratch from one of these monsters, their bite causes the worse effects to manifest almost immediately. A victim can only be cured via a cure disease ritual, they cannot Improve until they are cured. Any victim that "improves" while in the "Initial Effect" stage instead maintains that condition. If a victim dies for any other reason besides the living death while infected they will reanimate 1d6 rounds after death as a living dead. As well if the victim dies as a result of the cure disease ritual, they will rise as a living dead 1d6 rounds after death.

As stated above, even the slightest scratch from one of these monsters will transmit their malady. Anyone who takes damage from a member of the living dead becomes infected with living death. In the case of those only damaged from a claw attack the infection will remain dormant within the victim for the rest of their lives, and while the disease is dormant the victim will be able to heal normally and suffer no obvious outward effect of the infection. The infection becomes active as soon as the person dies (no matter the cause) causing them to reanimate 1d6 rounds after death, becoming a member of the living dead. The dormant infection itself can be destroyed by casting a cure disease ritual on the victim anytime prior to death, but if the victim dies as a result of the cure disease ritual, they will rise as a living dead 1d6 rounds after death.

Those that are brought back to life with a raise dead ritual will still carry the dormant form of living death until a cure disease ritual is performed on them.

Old Wounds: The players arrive at a small fog enshrouded village near sundown. One of the villagers is an ex-adventurer who survived an encounter with the living dead many years ago. As the Players bed down for the night at the local tavern, the ex-adventurer passes away (either by natural means or the victim of foul play) and rises as a living dead. By the time the players know what is happening the village has become overrun, and they are trapped at the tavern with a group of commoners. Now they must save the day, and possibly discover the source of the rising.

Ghost Town: Similar to the idea above, except when the players arrive the village has already been wiped out by the living dead. Aside from groups of living dead the players discover some spectral undead (ghosts, specters, wraiths, etc.) haunting the village as well. There may even still be small groups of survivors trapped around town as well, and a few might know more about what happened in town and who some of the spectral undead are.

Keep of the Dead: The players arrive at a small city (or well developed town), that has a small keep on its outskirts. The keep is owned by a well known, and much loved, local mage. The mage hasn't been heard from in days, and shortly after the players arrive a lone living dead zombie wanders into the city from the keep. The players should set off on a good old dungeon crawl through the keep, encountering various traps, monsters, constructs, and other standards that any mage's fortress might have. They will also discover that all the people in the keep have become living dead. As the players dig deeper they can find out what experiments the mage was doing that caused the infection, and prevent it from spreading to the city. Maybe it was an accident or maybe he wasn't such a nice guy after all. This idea works even better if it can be placed in a city/town that the characters visit frequently, or perhaps live in.

Ambush: Word reaches the players about a group of humanoids (orcs, gnolls, goblins, etc.) that are attacking passing caravans, but then just eating the victims and taking no treasure. The string of attacks are getting closer to the player's current location so they set off to check it out. The characters discover a large (100+) group of living dead about to pour into a small town. The group of living dead is made up of a reanimated tribe of humanoids and their victims from the caravans they attacked. The cause of the infection could be anything from a disgruntled lich, to an ancient curse placed on a long forgotten holy site that the humanoids desecrated. The corpse of the humanoids leader should carry the evidence of what happened to his tribe, and perhaps lead the players toward another adventure.

I Zombie: This adventure takes place in a large city. A pair of young lovers were attacked by a living dead zombie. Both survived, but the girl was bitten. Once home she languished for hours before passing away and rising herself. She managed to kill most of her family before her lover stopped her. But unable to bear life without her the young man spent a fortune to have her raised. She returned but was driven mad by what she had done as a living dead. Now she has become a serial killer, and believing she is still some form of ghoulish undead. She will eat parts of her victims, and in doing so causes them to become infected so they rise as living dead. The characters become involved as her victims begin causing trouble in the city. While this adventure should have some combat, and the real threat of the living dead infection spreading throughout the city, it should focus on investigation skills. As the players investigate they find themselves dealing with a local government that is trying to keep the whole thing quiet, and the young male lover who is trying to cover up his beloved one's actions.

The End: This could be used as the launch of an entire campaign (ie. Moertus). A cult of death worshippers have managed to simultaneously infect the water supplies of every major city in the land with the living death virus. Once they feel the populous has been fully infected they launch attacks in every city (mass poisonings, spell attacks, etc.). Soon the cities are overrun and huge groups of living dead are making their way across the countryside. The players are trapped in a world of living dead (and other horrors), and must survive until civilization can be rebuilt.

Cursed: A player necromancer, or other character with a penchant for creating undead, gets cursed. Now when he/she creates a zombie it will become a living dead. The DM should allow 2d12 hours to pass with the zombie behaving as normal, and then it transforms into the living dead. This becomes an immediate problem as living dead cannot be controlled, and they immediately seek to attack the living. The players will need to go on a quest to lift the curse, or learn to live with the curse. It's up to them.