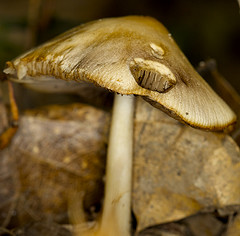 A laughing shroom. Recognizable by its little 'laughing mouth'.

Laughing shrooms are uncommon, but very common-looking mushrooms that grow in humid and/or fetid brambles and forests where wood rot is prevalent. They are beige and become between 2 and 10 inches large.

1d6 minutes after eating a laughing shroom, the eater must succeed on a DC 17 Fortitude save or start laughing uncontrollably. While under the effect of the laughing shroom, a character can still move, albeit at only half his base land speed at any time. He can also still attack and perform other actions, but does so at a -4 penalty to any attack roll, skill check, or ability check. Casting spells is done with a DC 25 Concentration check, but casting spells with any verbal component or that require a full action casting time is impossible while under the effects of the laughing shroom. He can only make single actions only (either a move action or standard action each round). The effects of the laughing shroom persist for 1d4+1 hours and cannot be countered by conventional healing, although a neutralize poison spell will remove them immediately. At any rate, the laughing shroom is simply out to give you a laugh and will never pose any true health risk.

It is often said that the laughing shroom has a sense of humor itself, as it naturally attempts to grow amidst groups of other, edible, mushrooms with similar size range, shape and coloration in order to conceal itself and let itself be unwittingly plucked. Identifying a laughing shroom requires a DC 30 Knowledge (nature) or Survival check.

It is possible to distill and refine the poison from a laughing shroom with a DC 25 Craft (alchemy) check. The refined poison from these muchrooms is often called 'cacophonous cacklebroth', or more universally cachin.