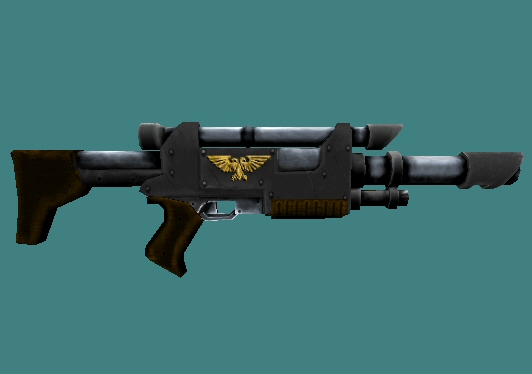 The ammunition is a large battery that fit like normal magazine clips into the rifle. Each magazine only fit a lasgun of the same size and contains enough energy for 16 shots on medium setting (se below for other settings). The weight shown above is without a magazine. The magazines weigh the same as the rifle no matter if they are empty or fully charged. Each magazine costs a 10th of the lasguns price in similar size (a medium magazine costs 75 gp each).

The lasgun can be made as a masterwork and follow the normal rules, but can only be enchanted with the following enchantments. (Search dandwiki for them or google for dnd3.5Index-MagiItems)

Settings The lasgun can be fired on 3 settings, high, medium and low. High setting consumes 3 shots, but makes the lasgun deal damage as if it was one size larger. (Medium 1d10 would become 2d6). Medium setting consumes the normal number of shots as indicated by the table above and deal the indicated damage. Low setting only consumes half as many shots (to a minimum of 1) as medium setting, but deal nonlethal damage.

Magazine The batteries are rechargeable but it takes energy to recharge them. If you find a magazine as loot it has lost 1d10 shots and can not be recharged beyond that. There are 4 ways to do this.

The second way is to use a charging station. This will fully recharge the magazine in 30 minutes and will not damage the magazine in anyway. There exist portable charging stations but they can only recharge one size of magazines and need an energy source like a campfire or an arcane crystal (any fire, shock or arcane damage source will work). The portable charging station has a 15 ft long cable that has DR 8/adamant and must be placed through the energy source for the charging to begin. Such devices cost 1000 gp for a fine charger and the price doubles ever size from there. (Which would make it 5000 gp for a medium charger)

A third way is to deal energy damage (fire or shock) directly to the battery, but for every 10 points of damage dealt this way the max amount of shots is lowered by 1. Ex you deal 4 points of fire damage and charge 4 shots. Then you deal 8 points of shock damage and recharge another 8 but the maximum is lowered by 1 point because you have dealt over 10 points of damage to the magazine. The energy damage can come from any source (spells, environment, enchanted weapons and so on). The most used method is throwing it on the camp fire for a few seconds (a round or two should do it)) which recharges the magazine 1d6 pr round number of shots, and deal the same in damage to the battery (remember that each 10 damage lowers the total amount of points by 1)

Fourthly you can get an arcane spell caster to expend a daily spell to recharge a number of points equal to twice the level of the spell. A 9th level spell would recharge 18 shots. This doesn't require a feat or check like recharging a staff or wand, but it will take a full-round action to do, and count as casting the spell (Attack of opportunity and so on).