Large and proud creatures, they are the most populous native in all of Ferenheim. They live in peace on the temperate islands of Ferenheim living mainly from hunting and gathering wild vegetables. They are, however, able to be sedentary. They build small villages and wooden huts, surrounded by fruit trees and a few small farms. Their culture is entirely oral: all Korin are illiterate and therefore all teachings and legends are telled verbally from father to son. Their only art forms are painting and wood carving. They are able to forge iron and know goldsmithery and music. They can easily be considered good craftsmen.

Despite their appearance and build, they are much more related to Fauns and Bariaurs than elven races. As a rule, all Korin are between 1.80m and 2m tall and have a proportioned body identical to the human one, but skinny and more muscular. The muscles are well defined, the legs are strong and the abdominals are evident in both sex. As clear distinctive traits, they have big twisted goat horns and pointy ears similar to the half-elves. 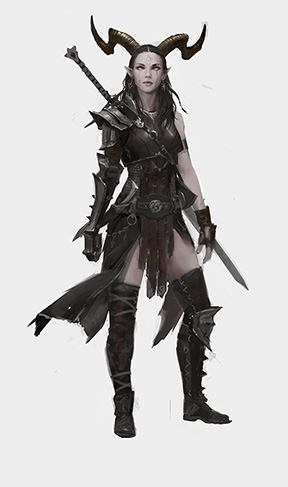 The average life span is the same as that of humans, however they have a bad relationship. Although in the first years of cohabitation there were no problems, over the years humans have gone everywhere in the archipelago, constantly expanding, taking away territories from Korin constantly. The breakup occurred when humans and dwarfs deforested the sacred forest dedicated to the spirits on the island of Meren to make fields for cultures. Completely disinterested in the problems of the native races and totally indifferent to them, one day they decided to put an end to the diatribes by simply destroying the forest by setting it on fire, so that it could be completely deforested in a single day with no possibility of external intervention. This infuriated the local Korin who immediately took reprisals against the invasive races. Revenge came swiftly and violently, and although they managed to drive the invaders out of the forest of Meren, the price to pay came soon and was very high. Numerous troops composed of humans, dwarves and half-elves arrived within a few days to eradicate the revolt at its root. The elves did not take part in the clash. The battle was fast and bloody, the Korin were overwhelmed in number and few managed to escape. Thanks to the magic of some sorcerers, Korin survivors abandoned the island and scattered to seek refuge to other communities. Currently there is no dialogue between the Korin and the invaders with the exception of the elves, and the only possible solution seems to be violence and war. Unfortunately, however, fate dictates that the war is lost at the beginning: the Korin are in a clear minority as a population and currently the disparity of forces overwhelms them in the order of five to one. Although not all is lost because some tribes are currently secretly dealing with all the other indigenous races of Ferenheim such as the Avariel. If this were to bring results, the forces at stake would end up drastically changing the fate of the future war and turning in their favor.

Usually any not Legal not Evil.

Any temperate islands of Ferenheim away from human settlements but wherever there is game and harvest can adapt and survive.

The Korin communities are almost exclusively animist, they worship the benevolent nature and the spirits that inhabit it, there are no clerics and paladins of any kind, occasionally it is possible to meet spirits shamans and much more rarely druids and healers.

Korin have a single name followed by clan name, sometime can be an adjetive or role (example: M "Kotal, warrior of Kannis" or F "Exes, from Demme's clan".)

(ex) low-light vision:The Korin have excellent color vision in areas of partial darkness, as in a starry night or a cave lit by torch.

Bonus Feat. Korin are very practical and teach their children from an early age all the tricks and knowledge they need to survive in the forests. Korin characters gain a generic feat bonus to character creation.

Bonus Skills: Korins are always competent in the following skills and get a +2 bonus to Observe, Listen, Survival, Climbing and Nature Knowledge.

Illiteracy: Korin people have culture and traditions handed down only in oral form: no Korin can read and write, but they all know how to count. All classes that intrinsically need to be able to read and write like the magician or cleric are precluded to this race.