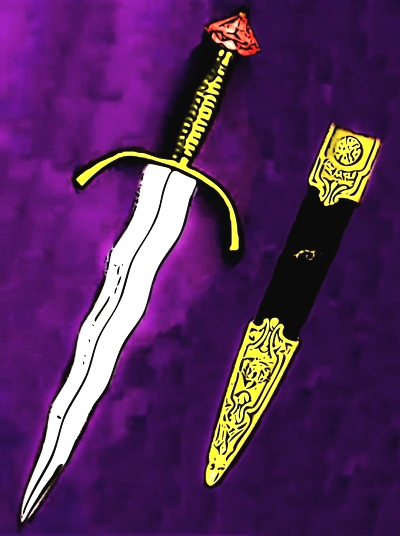 The Kingslayer and its scabbard.

Kingslayer was originally an artifact of the lesser deity Kozah, sent into the mortal realm in order to assuage the rise of tyrants. The dagger, however, was later claimed by an unknown champion of Gargauth—the God of Powerbrokers—and corrupted into its current state.

The dagger appears as a vicious silver blade with a golden hilt and crossguard, featuring a deep red ruby seated in the pommel. The accompanying scabbard is made of onyx-black leather with golden accents, marked by an obscure symbol in the center. Drawing the blade from its scabbard is completely silent, and though the blade is a bright silver, it does not reflect light.

Kingslayer functions as a +8 cursed dagger with the keen, speed, morphing, and humanoid bane special abilities.

† A character that has gone murderously insane under the effect of Kingslayer is forced to kill everyone they come in contact with in a stealthy, calculated, and concealed manner. Those under this effect are granted +10 to Diplomacy, Disguise, Escape Artist, Gather Information, Hide, Listen, Move Silently, Open Lock, Search, Sleight of Hand, and Spot checks. This effect may be ended if the hand wielding Kingslayer is severed, effectively breaking the artifact's hold over the wielder.