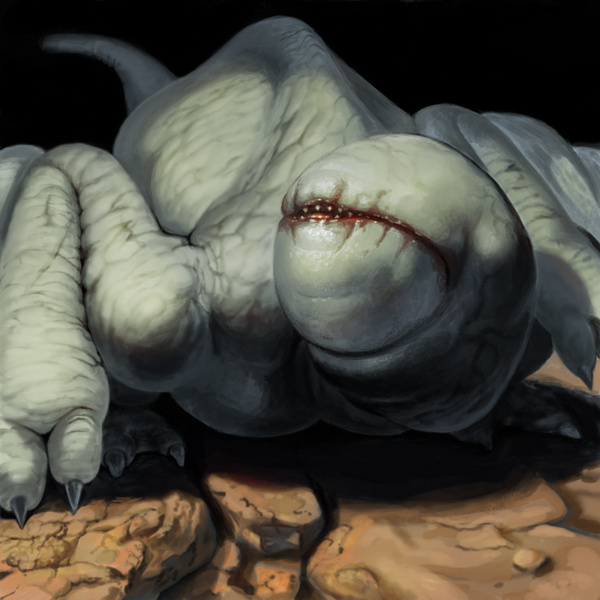 A sickly Khezu lowers to the ground, about to pounce on its unsuspecting prey

Exhausted, the merchants set up camp at the mouth of a cave. The walls of the mountain served to shelter them from the roaring gale, Too late did they realize that the whining, whistling echoing sound they could hear was not the blasting of the wind. With a great burst of blue, lightning arcs from the cave mouth and reduces the merchant caravan to charred corpses. Clambering out from the roof of the cave came a slimy white monstrosity, its eyeless, noseless face wide open maw with chattering teeth drooled a thick disgusting saliva. It was time to feed again.

The Khezu, while looking pale and sickly, is actually an incredibly well evolved hunting and killing machine. Its powerful limbs and wide ended digits are capable of sticking securely to almost any surface. Even its tail acts as an adhesion pad, allowing it to maintain three points of contact with a wall or ceiling while being able to use both its claw like vestigial wings and mouth to attack prey. It uses a strange mechanism to monitor large areas despite being blind. It lays large trails of thick clear mucus which all leads back to the Khezu's lair. These trails are often hidden and alert the Khezu through vibration. Once disturbed, the mucus releases a pheromone which allows the Khezu to track creatures that still have traces of the mucus on their feet after they leave the Khezu's hunting area. All of these senses are to compensate for the beasts lack of eyes. Khezu are blind from birth and never develop eyes. They have tiny eye-spots along their spine and wings which can determine light from dark.

While often being an Apex predator the Khezu does not attack each and every creature that enters its hunting area, more often than not attacks by Khezu on travelers are in self defense. The Khezu will often follow creatures and gauge their strength before attacking them. Even when the Khezu has gauged that it could definitely kill its prey, it may choose not to attack as it is not hungry. Unprovoked Khezu attacks happen for one of two reasons; The Khezu is hungry or needs to lay eggs.

Breath Weapon: (Ex) The Khezu's breath weapon is a cone of electricity 60ft. long and 30ft. wide at the end. The cone deals 10d8 damage (Reflex Save DC 25 for half) The Khezu can perform this attack once per 5 rounds.

Spider Climb: (Ex) The Khezu has the ability to scale sheer surfaces as if it were under the effect of the Spider Climb spell.

Stunning Pulse (Ex) The Khezu can hold back on its real breath weapon to produce something less deadly. Instead of breathing a cone of lightning, the Khezu can breath a 10ft. long line of lightning which deals any number of 1d8+1's UP TO but not necessarily 10d8+10 Non-Lethal Damage.

Implant: Once a creature is unconscious, the Khezu can implant a clutch of 4d3 eggs into the victim. The implantation process is very awkward, time consuming and destructive, dealing 1 damage per egg to the host creature and takes nearly 10 minutes to complete. If the creature dies the Khezu devours it and its prospective young. If the creature survives the Khezu deposits it two hours flight away from its lair and leaves it to heal. Eggs take 6 weeks to hatch, during which time they excrete an anesthetic which prevents the host from becoming irritated and seeking assistance. Once hatched, the Khezu devour the victim from the inside and flee.

Slick: The Khezu can move through a space half as wide as the space it takes up without incurring penalties to its AC or Attacks, though it still halves its movement rate.

Deafening Roar: As a swift action the Khezu can emit a shrill and piercing sound which deals 1d6 sonic damage to all creatures within 10ft and causes all creatures within a 50ft radius of the Khezu to make a fortitude save (DC 20) or be deafened and shaken for 1d6 minutes. The Khezu can perform this action once per day, after devouring a meal or after any 4 hour period of non-combat.