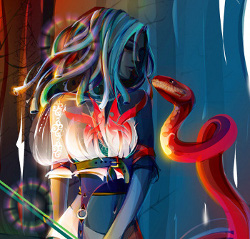 A Junction Knight and her Guardian, a Fire Spirit.

A youthful warrior protected by an awesome Guardian Spirit. Junction Knights master exotic weapons and signature moves to use against their many foes in combat. They also gain strange and powerful abilities from selecting a Guardian Spirit to protect them. This Powerful Elemental Creature grants them unique benefits at the expense of brief memory loss. The Guardian Spirit makes a place in the Knights mind where a small portion of their new power resides and emanates from. This causes the loss of memory for the Junction Knight at the benefit of combat prowess. This alignment between Mortal knight and Immortal beast is called Junction.

A Junction Knight's Guardian also has the ability to remove pieces from an enemies mind as well. The Junction Knight can call upon this ability in combat to hinder an enemy caster by removing a spell from his memory temporarily. Junction Knights have spent years training at special military academies to gain access to spell-casting abilities as well. Junction Knights can use their awesome power for justice and peace or for evil and destruction. In every case, they are a dangerous enemy to face on the battlefield.

Junction Knights are front-line fighters. The protect the party from harm by defeating and harassing enemies. They fulfill a similar role to the Paladin Class. Your choice in primary ability scores can help determine your combat specialty and build. See Combat.

All of the following are class features of the Junction Knight.

Exotic Weapon (Ex): At 1st level you gain proficiency with one Exotic Weapon. You also gain a bonus for it.

Defense Training (Ex): At 2nd level your armor check penalties are always zero. You also gain a +2 to Initiative.

Formal Schooling (Ex): At 3rd level you add your Intelligence modifier to all your saves.

Junction (Ex): At 4th level choose a Guardian Spirit to protect you. That Guardian blesses you with power. The Damage stacks and the guardians attack has a range of 20ft. Repeat this process every 4 levels.

Signature Move (Ex): At 5th level, once a day, you add your Intelligence modifier to your attack role. This attack, if successful, becomes a confirmed critical hit taken at a 3x multiplier. The use of this ability increases every 5 levels.

Draw (Su): At 6th level, once an encounter as a full round action, you can remove a spell from your targets memory. Your target makes a Reflex save (DC 10+Knight's level+Knight's Intelligence modifier) to avoid this ability or your target must choose one spell to lose for 2 hours. You determine the level of the spell they lose. If your target knows only cantrips or no spells at all then this ability is wasted.

This ability also does (x)d6 damage on a successful draw. Where (x) is the level of the spell to be removed.

Spells: At 4th level you gain the ability to cast a small number of divine spells, which are drawn from the paladin spell list. A junction knight must choose and prepare her spells in advance.

Like other spell-casters, a junction knight can cast only a certain number of spells of each spell level per day. Her base daily spell allotment is given on Table: The Junction Knight. In addition, she receives bonus spells per day if she has a high Intelligence score. When Table: The Junction Knight indicates that the paladin gets 0 spells per day of a given spell level, she gains only the bonus spells she would be entitled to based on her Intelligence score for that spell level. The junction knight does not have access to any domain spells or granted powers, as a cleric does.

A junction knight prepares and casts spells the way a cleric does, though she cannot lose a prepared spell to spontaneously cast a cure spell in its place. A junction knight may prepare and cast any spell on the paladin spell list, provided that she can cast spells of that level, but she must choose which spells to prepare during her daily meditation.

Through 3rd level, a knight has no caster level. At 4th level and higher, her caster level is one-half her junction knight level.

Draw (Su): At 13st level, once an encounter as a standard action, you can remove a spell from your targets memory. Your target chooses which spell to lose and cannot use this spell for 2 hours. They may make a Reflex save, (DC 10+Knight's level+Knight's Intelligence modifier), to avoid this attack. If your target knows only cantrips or no spells at all then this ability is wasted.

This ability also does (x)d6 damage on a successful draw. Where (x) is the level of the spell to be removed.

Regain Memory (Ex): At 22nd level you regain all your lost memories. You may add 1.5x your Intelligence modifier to all your saves.

Junction (Ex): At 24th and 28th level choose a Guardian Spirit to protect you. That Guardian blesses you with power.

Signature Move (Ex): At 25th and 30th level you may add your Intelligence modifier to your attack role. This attack, if successful, becomes a confirmed critical hit taken at a 3x multiplier. This ability can be use 5 times a day at 25th level and 6 times a day at 30th level.

Guardians come in all shapes and sizes. Colors too.

Also, use the Junction ability to its maximum benefit. Focus on your combat specialty by combining with a appropriate Guardian.

Guardians: Guardians are long dead, epic level, Extraplanar Magical Beasts. However, they have gained a dual nature. That is, when a Guardian is slain they release a Spirit similar to a humanoid.

They are exiled creatures of the Inner Planes, without a home, desiring to become mortal again. Their spirits do still possess immense power, language, immortality, and the ability to assume many spiritual forms. They communicate with special individuals, with whom they share a piece of their former selves. This small piece of the Guardian takes a place inside the Knights mind, pushing out the memories stored their. This rewrites a piece of the Guardian onto the Knight. This rewrite cannot be read by the Knights brain and simply comes up blank or empty when trying to access it mentally. It does however, imprint the power of the Guardian into the Knight.

The process of imprinting or junctioning is temporary. A Guardian can never give a Knight his entire epic form so a Knight can never fully loses his whole humanity. Whenever a Knight dies the tiny pieces of the Guardian within him return to their spiritual source.

Junction Knights in the World[edit]

NPC Reactions: A distinguished officer or a talented cadet.

Characters with ranks in Knowledge(local) can research Junction Knight's to learn more about them. When a character makes a skill check, read or paraphrase the following, including information from lower DCs.