The Inkmen are nothing if not observant. Those that visit the Material Plane oftentimes find themselves interested in its inhabitants and the world they live in, and many make a habit of watching them as a pastime. They find something enrapturing about the way these creatures live, and dip into the darkness to engage in their habit unseen. This lends most quite a bit of knowledge as to the workings of their world. However, social customs and common sense escape them more often than not.

They dislike light of all types, and will avoid it whenever possible. If they must be in broad daylight, they will most likely make an attempt to cover themselves, so as not to touch it. It is not harmful to them in moderate doses, merely uncomfortable.

The Inkmen are named for their unusual appearance. Their skin is like ink, an inescapable vantablack that seems to absorb light even from its surroundings. Their shape is humanoid. Some have visible eyes on any given part of their body, ranging from one to dozens, that may glow in an array of colors. Others have sharp, white teeth and a too-wide smile. Many have no defining features at all, and appear as frightening silhouettes. Any hair blends in with the all-encompassing black, and may only be visible if especially long of voluminous. Despite their name, they may present as whatever gender they choose. They are tall but not heavy; the matter they are made of is not as dense as flesh. 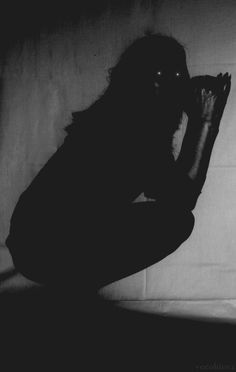 Due to their unnerving nature and lack of charisma, Inkmen are generally disliked by other races. However, they seem to have a fondness for all creatures of the Material Plane, particularly any that they deem "interesting".

Inkmen can be of any alignment. Many tend towards Evil or Neutrality, but others, especially those who have remained on the Material Plane for a long time, may be Good. They also have a tendency towards Chaos, but Lawful Inkmen are certainly not unheard of.

Inkmen hail from the Negative Energy Plane, one of the few creatures to inhabit it. They are born from negative matter itself, and wander the plane nomadically in search of anything, or sometimes, nothing at all. Although many are content to call this plane their home, and where they feel most in their element, others wonder what else might be out there, and deign to find a way out of the darkness. Those that dwell on the Material Plane usually do not have a home, as they do not need to eat or sleep. Most prefer to travel, while others inhabit areas or buildings-- oftentimes without the owners' awareness.

Most Inkmen do not have a named deity, but rather, revere the everlasting, infinite darkness from which they came.

They know Infernal by nature, and those who encounter creatures of a certain culture for an extended period of time will pick up their language over time. This is why many of the Inkmen encountered on the Material Plane speak common. Those who inhabit the wilds may pick up on a different language, such as Sylvan or Orcish.

Inkmen are not given names. The few that have names had them given by those who encountered it. As such, the name of the Inkman truly depends on those they've met. It may be anything from an average name (Finnigan, Alice, Gnosh) to a nickname (Spades, Dusky, Slick) to, for the unfortunate Inkman, an insult (Creep, Bastard, Menace).