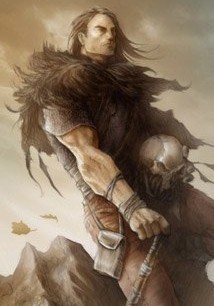 "Oh, to reach for the clouds."

Speed combined with leaping combined with the right techniques makes for one of the most impressive and maneuverable fighting styles seen in melee combat. Practitioners of this fighting style move through their world in great leaps. By using their strength and speed to propel themselves forward they seem to be able to take flight. Momentum is what this fighting style is all about. Though this fighting style is mostly adepted by Monks, other classes and less rigorous alignments than Lawful have been known to take up this training. Practitioners are nearly always well muscled, especially in the legs. It is rare you will see a Impetus Paragon on bare feet or sandals, since their constant leaping and moving asks for good sturdy protection of the ankles. There is no Impetus Paragon that clothes the same, it is only required that you are able to move freely in the robes you choose. Because of their focus on speed, maneuverability and combat prowess most practitioners that started out as Monks put aside their inner search for Ki and do not become an outsider. This style of fighting is not secretive, nor is it insanely hard to gain training in this style. Anyone practicing this style will be enthusiastic about it, and should be eager to teach others. Characters gaining levels in this style or PrC are fast to join the battle, love the adrenaline, and love the feeling of flight.

Feats: Improved Unarmed Strike Leap of the Clouds or similar ability. A permanent Jump spell cast on your body (not equipment) will do just that, but being dispelled of that feature will disallow you from leveling in this PrC.

You make a powerful attack after making a jump.

(Straight from Sword and Fist)

Fluent Rise You are able to jump onto inanimate objects of up to twice your length in height without having to make a Jump check. This is a move-equivalent action. Also, you are able to run along a wall at a height of 10 feet for 20 feet as long as the ceiling is high enough. You need to run for at least 10 feet to get up to the wall and 5 feet afterwards to come off of it again, effectively moving 35 feet. This counts as a double-move action. As a last bonus you are allowed to add half your [i]Ranks[/i] in Jump to your Perform (Acrobatics) checks.

Combat Jump You are able to place your hands on your foe and use them to move yourself over them. This is especially useful when being flanked. Use: Make a melee touch attack against the opponent you wish to jump over. If you succeed you grab the opponent by the head, shoulders or anything similar and move yourself across the 5 feet they are occupying and into the 5 foot square behind them. Using this ability does not provoke an attack of opportunity from the target creature, though it does leave you open to any other opponents threatening your current postion (tumble skill applies). This ability is not usable when: The creature is two size categories larger than you, occupies more than a 5 foot square or the 5 foot square behind the target creature is occupied.

Greater Mantis Leap Instead of muliplying your Strength modifier times 2, it is now multiplied times 3. You also get a +4 attack bonus when jumping across more than 50 feet.

Improved Combat Jump (ex) You still make a touch attack towards one opponent but when jumping over them you can now choose from either of these three options:

Make a single attack towards an opponent flanking you. This attack is made at your second highest AB and deals normal Unarmed damage (your first 'attack' went to the touch attack).

Try to Grapple the opponent. This does not provoke an attack of opportunity like a normal grapple attempt.

Start to attack the opponent. The opponent loses his dexterity bonus to AC when you attack him after this move. You have lost your first attack that round to the touch attack.

Sprinter (ex) Instead of running for a short distance at x4 your base-speed, you now run at x5. The ability to ignore terrain that you gained with the Strong Runner ability works for this aswell.

Fluent Grasp (ex) You are allowed to make any Jump check towards a wall and attempt to grasp onto it. Make a Climb check against 10 + the normal Climb DC of the wall to see if you are able to get a grip. If you fail, you fall down again.

Take Flight (ex) You gain +10 on your jump checks, you gain a featherfall-like ability to be activated at will an amount of times per day equal to your Wisdom Modifier. Also your Greater Mantis Leap ability increases in power. When you score a successfull attack on the subject you you do not only your normal damage plus 3 times your strength modifier. You and the opponent now have to make a Strength check using the bull-rush rules, you get a +4 bonus on your check from the sheer force of the attack. If the opponent fails this check you push him back 5 feet as if bull-rushed and the opponent falls prone.

Created by Atar. Never been playtested.