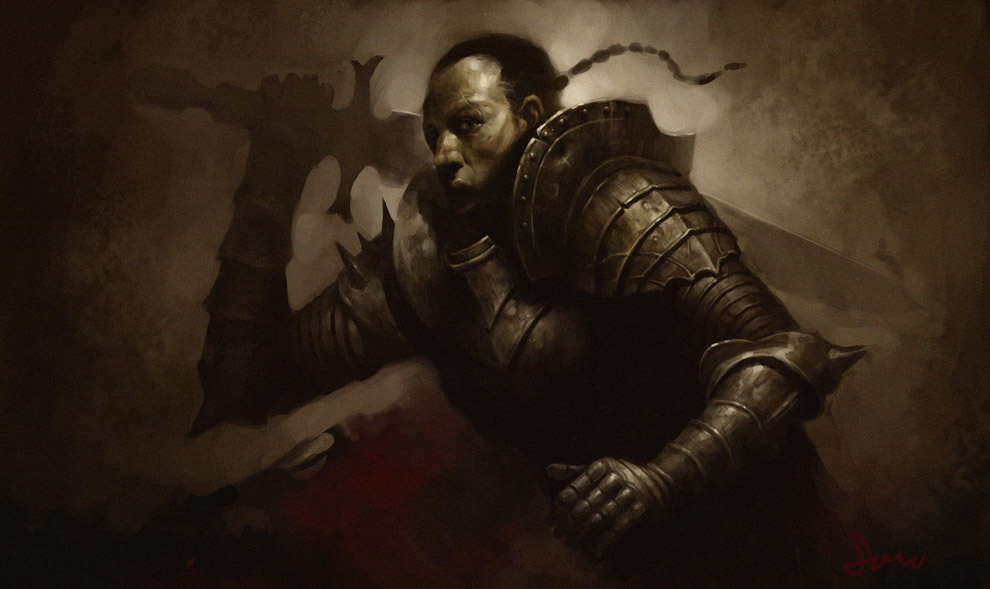 An Impediment is someone who has an iron will and does not bend to another’s wishes. They are strong minded individuals who block all in their path, protecting that which is dear to them. The Impediment rarely feels fear, their courage surmounting all else, though the emotion is not something that can escape them. When the Impediment does feel fear, they choose not to let it overcome them, preferring instead to hold their mind steady and face what is before them. The Impediment is the guardian of their world, never giving up and never backing down.

People who have something to protect usually are the most likely to become impediments, though it isn't unknown for a common warrior to become one. Impediments have the ability to stop any being that bears down upon them, no matter how large.

All of the following are class features of the Impediment.

Fearless: At first level an impediment teaches himself to never back down, to face whatever comes before him without flinching, becoming immune to all fear effects.

Body of Granite (Ex): As an impediment grows to become a true defender, his body itself seems to grow hard and unyielding, turning the impediment into a stone-like guardian. At second level the impediment can add his Con bonus to his AC, this bonus applies to the impediments flat-footed AC, but not against his touch AC.

Defender (Ex): As an impediment becomes stronger and more resolute, protecting others becomes almost second nature to him. At second level any ally of the impediment that is adjacent to him gains a bonus to AC equal to half the impediments levels in impediment. This bonus applies to both the characters flat-footed AC and their touch AC.

Endure (Ex): As an impediment weathers even the most horrible storms to protect what is dear to them, his body grows tough and numb, allowing them to endure even further. At third level an impediment is considered always under the effect of an endure elements spell.

Mettle (Ex): At fifth level, an impediment can resist magical or unusual attacks with great willpower of fortitude. If he makes a successful Will or Fortitude save against an attack that normally would have a lesser effect on a successful save (such as a spell with a saving throw entry of Will half or Fortitude partial), he instead completely negates the effect. An unconscious or sleeping impediment does not gain the benefit of mettle.

Improved Mettle (Ex): At eighth level, an impediment can resist magical or unusual attacks with even greater willpower of fortitude. Every time the impediment fails a Will or Fortitude save against an effect that has a reduced effect on a successful save, he instead takes the reduced effect as if he had made that save.

Combat: Impediments are guardians who stand at the front lines of a battlefield and take the brunt of the enemies attacks, holding them a bay. If a PC who has levels in impediment intends to protect the other members of their party, it is advisable for them to expend every effort to raise their AC and to draw the enemy to them if possible.

Resources: An impediment is someone who seeks strength alone, defending something for themselves, and therefore, organizations of impediments are exceedingly rare. Though if the impediment needs help, they usually have someone to turn to, such as a friend, or an old colleague, though sometimes, these people are the very things the impediment is trying to protect.

Impediments often find their place in the world as guardians, possibly learning to protect their masters tomb from loathsome thieves, or to keep tribal marauders out of their home towns. It also isn't uncommon to see an impediment standing sentinel outside a kings palace, or even in the middle of a battlefield, holding back a war elephant. Impediments sometimes do find another place in the world, though if they do, they usually have a strong loyalty to their life, and what they do, be it baking pies, or paving roads.

Characters with ranks in gather information can research impediments to learn more about them. When a character makes a skill check, read or paraphrase the following, including information from lower DCs.

Impediments in the Game[edit]

Impediments are the walls of the world. They hold back the destructive forces of this world, weathering all, just to simply spare something else from what they endure. Impediments can either choose to be a protector, or an obstruction, depending on their motivations. Impediments can be found wherever there is something for them to save from destruction.

Adaptation: Impediments can be incorporated into any campaign, all that is needed is an opening. An impediment could be the guardian of the kings throne room, or possibly the warden of a maximum security prison, protecting the outside world from imprisoned criminals. An impediment could perhaps be a iron-willed military outcast who still is determined to defend his home, no matter the cost, or an obstruction in the campaign, someone who refuses to yield to something the party wishes to be done.

Sample Encounter: Eur Tareh was once a dark being, he preyed upon the fragile and the weak, he never showed even the slightest shred of mercy, he truly was a monster. Until, one night, he came across an ancient human, he was sitting in one of the dark corners of the tunnels that Eur prowled, shivering in the cold. As Eur approached this pathetic sight, he grinned, a low, bestial snicker permeating the air. At this point the man rose his head calmly, and asked a simple question, "Who's there?" in a tone that could've been used to ask the time. To answer him, Eur laughed, and said, "Your death old man." At this, the decrepit man laughed, he actually laughed, and before he knew what was happening, Eur had been thrown across the room and his shoulder had been cut with an enormous sword. Blood dripped from the wound in his rock-like flesh, and the tiny man continued to laugh, pausing only to say, "You're the fourteenth thing to use that line on me." With that the man set down his blade, and curled back up into a warmer position. Eur shakily regained his footing and looked around to the ancient man, but quickly turned and fled. Over the next few weeks, Eur followed that man, wondering, why did he let him live, when he had been so ready to kill the man, not being able to think about anything else. After three weeks, the man stopped and made camp a few miles from a city, after the man had ate and sat for a few hours, he spoke in a loud, clear voice, "I'm going into the city tomorrow, you might want to turn back now." Eur seemed to be in constant shock by this human, so, he said the first thing that came to mind, "Not until you teach me how to do what you did to me." The man laughed at this, but agreed, and told him to be in that same place at noon the day after next, and that in order to learn what he sought, he would have to change his ways of living. So Eur was taught by the man, four years went by, and every day, the man and Eur met, the man taught Eur how to hold a blade, and told him the ways of living that had made the man who he was, and Eur listened with eager ears. Until one day, the man did not come, nor did he the next day, or the next. Eur had begun to become worried, and so he risked going into the town, but he did it quietly, flying from rooftop to rooftop, until he found the place that the man had said he had lived, and he watched the place, remaining as still as possible as he perched on that roof. He eventually learned that the ancient human had died, and that he had been placed in the catacombs in the graveyard of the cities church, and so he went there, and stole into the catacombs. He mourned the death of the man for a week in silence, hiding in the shadows whenever someone entered, until, 3 men came, and they talked about the ancient man, and how he must have been buried with something valuable, and how they would make so much money off of whatever it was. Eur killed them. So it has come to be known that something ill tempered lurks in the shadows of the catacombs of that town, killing only tomb robbers, but without mercy.