Hylians are the most adaptable, flexible, and ambitious people in the common races. They are diverse in their morals, customs, and habits. Some races would accuse them of being aloof, but it's only natural that Hylians, with the widest expanse of territory and thus different cultures, would have a more loose-knit community than Gorons or other races.

Hardy or fine, showy or austere, primitive or civilized, devout or impious, Hylians run the gamut in The Legend of Zelda.

Just as they mix with each other, Hylians mix with members of the other races, among which they are known as "everyone's second-best friends." Hylians serve as ambassadors, diplomats, magistrates, merchants, and functionaries of all kinds. Although, because of the Hylian Civil War, they don't willingly associate with the Gerudo

Hylians tend toward no particular alignment, not even neutrality. The best and worst are found among them.

Hylians, as their name suggests, are the rulers of Hyrule. As Zelda is constantly beset by one villain or the other, their lands are usually in flux as various acts of wanton devastation terrorize the kingdom. Members of other races are usually affected by this as well as the evil spreads into Death Mountain, The Lost Woods, Gerudo Valley, and the Zora's Domain. As such, the other races can find Hylians rather wearying at times as their affairs bother them as well.

Major Hylian cities generally include members of other races as well (compared to the amount of non-gorons living on Death Mountain, for example).

Hylians usually worship one of the three Goddesses or one of the light spirits, though which one depends on region and personality.

Hylians speak Hyrulean (common) They typically learn other languages, including obscure ones, and they are fond of sprinkling their language with words from other tongues; Deku Scrub curses, Zora musical expressions, and Goron military terms, for example.

Terminians are native to the plane Termina. As such, when they travel to Hyrule they have the "outsider" creature type. Otherwise they have no racial traits that change . 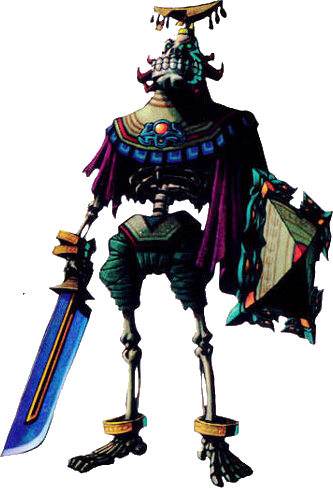 In termina there is a kingdom called Ikana comprised of a legion of undead people due to the curses of Majora's Mask. The curse forces them to convert all into people into one force untill there are no more left. This curse remains even after death.

Ikanish have the following racial traits

Curse of Ikana: Ikanish are cursed for eternity, even after death. This curse is a variant or the "Quest" spell. This curse cannot be removed by the atonement spell or the like. Ikanish must always be in search for more victims to spread their curse. They may choose to associate with others but only if they remain on their quest while associating with them. The curse also grants -2 CHA. This ability change can be removed if the curse is lifted. The curse may be spread by killing a living humanoid and turning them into an Ikanish , a ritual that takes 8 hours. Ikanish are picky about who they give their curses to. Typically they won't just waltz around killing and turning wherever they go. The subject must be a worthy opponent of equal or greater level then the Ikanish . Or a willing subject of greater strength that has proven themselves worthy in battle. Royalty and divinities are always candidates for their curse. The curse can only be lifted when there are no more living victims for their curse.

Immune to sneak attacks: Ikanish have to no decernable Anatomy.

spells and abilities that heal Ikanish instead deal damage to them. Spells that Inflict negative energy damage heal them

Not affected by raise dead and reincarnate spells or abilities. Resurrection and true resurrection can affect Ikanish. These spells turn Ikanish back into the living creatures they were before becoming undead. The curse still remains.

Ikanish do not breathe, eat, or sleep, although they must rest for 8 hours to restore spells.

Not at risk of death from massive damage, but when reduced to 0 hit points or less, it is immediately destroyed.