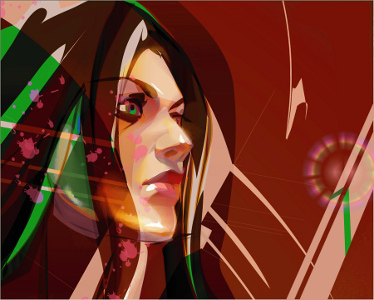 The change was complete. The body had evolved. The power was unimaginable.

Turbo Hybrid Elites are half humanoid, half technomagic, and all Badass. They are a super-humanoid infused with unstable amounts of arcane energy to fuel the clockwork engine that powers their mechanical body. This is made possible by a combination of surgical implants, bodily spell transfusions, and sometimes an explosive accident. This painful infusion of potent magic and machines shows most notably because of their massive steel hands, and in other less observable ways such as glowing scars, strange green eyes, or pistons, wires, and metal plates sticking out of the skin. The powerful energies that now course through their body grant them unnatural feats of strength and agility. Turbo Hybrid Elites can perform stupendous acrobatic leaps and death defying stunts. They favor using their oversized metal hands to maximize their crushing potential.

Monks sometimes opt for this transmutation, forgoing the patient route. They make potent use of their heavy mechanical bodies and often throw themselves at opponents without worry. When working with a party it is important to remember that Turbo Hybrid Elites love to enter the melee first via their long jumps so they rough up the enemies with Area of Effect damage. One good uppercut can send an enemy flying into the air only to dash against the ground. Hybrid Elites don't always use common sense or a collected mind to solve conflicts, they prefer using their fists.

Strength and Constitution are your most important abilities for this class.

All of the following are class features of the Hybrid Elite Turbo.

Monk (Ex): Each level of Turbo Hydrid Elite counts as a level of monk for the purposes of determining your Unarmed Strike damage, your Flurry of Blows, AC Bonus, and your Fast Movement. You gain no other benefits.

Quantum Mecha Punch (Su): At level 1, you can punch an enemy so hard that their future self feels it. In combat, if you successfully deal damage to an enemy with an unarmed strike, then on your enemy's next turn, your enemy takes magic damage equal to your unarmed strike. This ability does not apply Punch Drunk or any other effect. An enemy can only take damage from this effect once per round.

Vault (Ex): At level 2, you can leap great distances due to your mechanized legs. Once every 1d4+2 rounds you can jump a great distance either vertically or horizontally. Using this ability is a move action and can be considered a charge or a dive for the purposes of making an attack when you reach your destination. Using this ability provokes an attack of opportunity if you do not have the Mobility feat. You always land on your feet when you use this ability and cannot be knocked prone no matter how far the distance fallen is. Uses per day is equal to your Constitution modifier.

Shock Absorber (Ex): At level 2, you take half the damage rounded down from falling.

Ground Pound (Ex): At level 2, if you fall any amount of distance, you can slam into the ground and deal damage in an area. When you land, all creatures in the square you land in and squares adjacent to it take falling damage equal to 1d6/20ft fallen (Max 15d6). Creatures can make a Reflex save of DC 10 + ½ your character level + Constitution modifier for half damage, unless that creature is being grappled.

Bionic Uppercut (Ex): At level 3, a Turbo Hybrid Elite can use his punch to either send his enemy or his enemy and himself into the air. As part of a Vault, a Turbo Hybrid Elite declares he is using Bionic Uppercut before attacking. As a full round action, you make one single powerful melee attack against an enemy. If you successfully deal damage, you make a grapple check against the target. If you successfully grapple your target, you can choose to either release the grapple and send the target flying into the air, or both you and your grappled target travel upwards at an exceedingly fast rate. The height of the ascent is equal to your Vault ability. On the next round if you had chosen to ascend as well, you may choose to release the grapple and can do a full attack even while falling. If you are grappling with an opponent when you hit the ground, your opponent takes full falling damage as if they had fallen alone.

Punch Drunk (Ex): At level 7, when you punch someone, your punches knock your opponents loopy. Punch Drunk forces a foe damaged by your unarmed attack to make a Fortitude saving throw (DC 10 + ½ your character level + your Constitution modifier). A defender who fails this saving throw takes 2 Wisdom damage.

Juggernaut (Ex): At level 10, your movement speed can no longer be reduced by any means magical or nonmagical. Whenever you are in combat, each time you successfully deal damage to an opponent, on your next attack you gain a cumulative +1 alchemical bonus to damage rolls (Max +5). The duration of this bonus lasts until the end of combat.

Overdrive (Su): At level 10, 1/day as a standard action, you can simultaneously cast both Haste and Freedom of Movement as a personal spell. The duration of these bonuses lasts until the end of combat.

In the real world, most objects fall about 400 feet during the first round, but continue to gather speed as they fall. (round = 6 seconds). Science! 9.8 meters per second squared.

With this class, a level 10 Turbo Hybrid Elite/level 8 Monk, you will reach your ~maximum normal vertical jump distance of 450feet. This would require 2 rounds of falling if you chose to jump the full distance. If you are character level 17 and below, all falls from the maximum pinnacle of the Vault jump take only take one round to complete.

Official Falling Damage Rules: The basic rule is simple: 1d6 points of damage per 10 feet fallen, to a maximum of 20d6.

Falls onto yielding surfaces (soft ground, mud) also convert the first 1d6 of damage to nonlethal damage. This reduction is cumulative with reduced damage due to deliberate jumps and the Jump skill. Falling into Water

Characters who deliberately dive into water take no damage on a successful DC 15 Swim check or DC 15 Tumble check, so long as the water is at least 10 feet deep for every 30 feet fallen. However, the DC of the check increases by 5 for every 50 feet of the dive.

Combat: Punching enemies into the air and then slamming them into the ground to deal massive amounts of damage.

Turbo Hybrid Elites in the World[edit]

The T.H.E. are unnatural boxers due to their imbued strength and speed. Most every known Hybrid got their start through the monk lifestyle.

NPC Reactions: T.H.E.s are often regarded as brash individuals who

Characters with ranks in Knowledge (local) can research the T.H/E to learn more about them. When a character makes a skill check, read or paraphrase the following, including information from lower DCs.