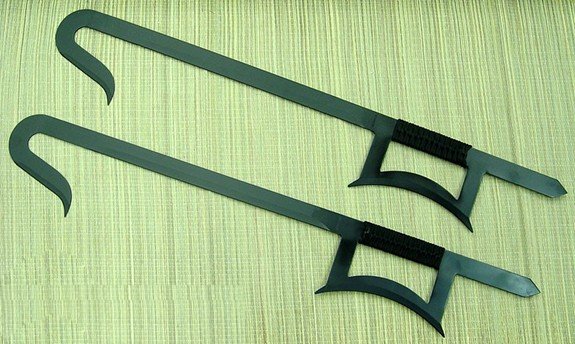 A pair of chinese hook swords.

Hook swords (otherwise called Shuanggou or Gou) are relatively modern Chinese weapons that were predominantly utilized by civilians, but traditionally associated with the Shaolin Monks of Mount Shaoshi, China. They consist of a long, straight blade that ends in a hook, and a hand-guard not unlike a butterfly knife that serves both as protection for the weapon hand and as a secondary weapon.

If you are wielding a hook sword in each hand, you may link them as a move action. While linked, the swords are considered to be a single weapon with reach weapon. Joining the swords is a swift action instead of a move action, if you have Weapon Focus (Hook Sword), or if you have a base attack bonus of +8 or higher.

If you have the Two-Weapon Defense feat and wield one hook sword in each hand, you receive a +2 shield bonus to AC instead of the usual +1.

Due to the design of the weapon, it affords a +2 bonus to trip attacks and disarming.