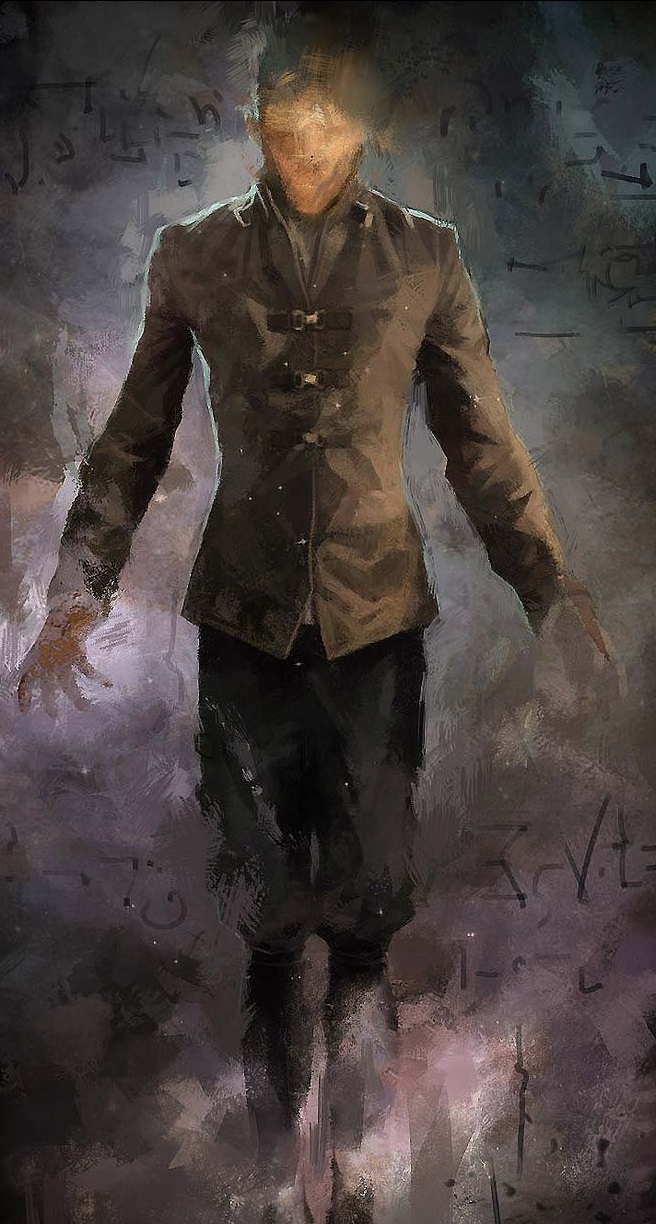 A Hero of Void is someone in tune with the planes so much that they can manipulate space itself seemingly without trying slipping in and out of existence on a whim. They are very flexible and can take on almost any role in a party depending on their preferences. Most would tend to lean towards a more sneaky approach, although they would also make excellent fighters. They do not particularly excel at magic, although some of their mystic abilities may make up for the speed at which they are able to learn spells.

Making a Hero of Void[edit]

Abilities: Wisdom is Very important for Heroes of Void as it helps them understand their surroundings and the spaces between, they may make use of any other abilities as well depending on what their role is as they are a flexible character.

Alignment: Any, usually some sort of Neutral.

AC Bonus: The Hero of Void adds their wisdom modifier to their AC while unarmored or in light armor and carrying a light load, this bonus is halved (round down) while in medium armor or carrying a medium load, and disappears completely disappears if carrying a heavy load or wearing heavy armor due to lack of mobility, this AC Bonus does not stack with other AC Bonuses like the monk’s 6th sense. At 6th, 12th, and 18th level the AC bonus increases by +1.

Void Step: A Hero of Void is swift and seems to move around effortlessly, when moving out of a threatened square you do not provoke attacks of opportunity. At 9th level a hero of void gains the ability to assume an ethereal state for 1 round per hero level per day, as though using the spell ethereal jaunt, at 19th level they may act as if using the spell etherealness. They may go ethereal on a number of different occasions during any single day, as long as the total number of rounds spent in an ethereal state does not exceed their hero level.

Mage Hand: At 2nd level a hero of void gains the cantrip Mage hand as an at will ability, caster level is equal to the hero's level.

Evasion: At 3rd level or higher if a hero of void makes a successful Reflex saving throw against an attack that normally deals half damage on a successful save, she instead takes no damage. Evasion can be used only if a monk is wearing light armor or no armor. A helpless hero does not gain the benefit of evasion.

Equivalent Exchange: At 5th levl, any spell or supernatural ability used by the hero of void can, if desired have its numeric values halved, and you may bestow the opposite effect of the spell on a second target, any ability effected by equivalent exchange takes a full round action to complete assuming the spell or ability takes one round or less to cast, if the spell or ability being affected by this takes longer than one round to cast stick with the original casting time.
Ex: If a level 2 Hero of void chooses to use Equivalent Exchange on cure light wounds (1d8+2) they can instead halve the hit points healed (rounded down) and drain the same amount of hit points from themselves, or a second target.

Wholeness of Body: At 7th level or higher, a hero of void can heal their own wounds. They can heal a number of hit points of damage equal to twice their current hero level each day, and can spread this healing out among several uses.

Blink: At 8th level, once per day a hero of void can use the spell Blink, caster level is equal to the hero's level.

Improved Evasion: At 9th level, a hero of void’s evasion ability improves. They still take no damage on a successful Reflex saving throw against attacks, but henceforth she takes only half damage on a failed save. A helpless hero does not gain the benefit of improved evasion.

Telekinesis: At 11th level, once per day a hero of void can use the spell telekinesis, caster level is equal to the hero's level.

Abundant Step: At 12th level or higher, a hero of void can slip magically between spaces, as if using the spell dimension door, once per day. Their caster level for this effect is one-half their hero level (rounded down).

Veil of Void: At 13th level, a hero of void gains spell resistance equal to their current hero level + 10. In order to affect the hero with a spell, a spellcaster must get a result on a caster level check (1d20 + caster level) that equals or exceeds the hero’s spell resistance.

Hide in plain Sight: At 15th level you are able to take 10 on a hide check even if this is not a class skill, You can use the Hide skill even while being observed. As long as you are within 10 feet of some sort of shadow, you can hide yourself from view in the open without anything to actually hide behind. You cannot, however, hide in your own shadow.

Timeless Body: Upon attaining 17th level, a hero of void no longer takes penalties to their ability scores for aging and cannot be magically aged. Any such penalties that they have already taken, however, remain in place. Bonuses still accrue, and the monk still dies of old age when her time is up.

Perfect Self: At 20th level, a hero of void becomes a magical creature. They are forevermore treated as an outsider rather than as a humanoid (or whatever the hero’s creature type was) for the purpose of spells and magical effects. Additionally, the hero gains damage reduction 10/magic, which allows them to ignore the first 10 points of damage from any attack made by a nonmagical weapon or by any natural attack made by a creature that doesn’t have similar damage reduction. Unlike other outsiders, the hero can still be brought back from the dead as if they were a member of their previous creature type.