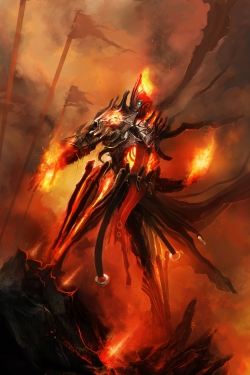 There is no art behind the HellFire Destroyer, only few mages whose body have experienced and overcome the fire of hell upon their skin can wield completely the power of the Hellfire. They spread terror and destruction, whoever cross their way will know the true meaning of suffering and will experience the pain of hell even before death, the nature of the HellFire Destroyer brings him to a path of destruction. Their body is just a vehicle through which the most terrifying powers of the Hellfire are displayed at their full potential.

The HellFire destroyer's power takes origin from his very soul, constantly enveloped by the HellFire, his spellcasting abilities allow him to use it in ways no other mage have ever dared to. It embodies the strength that only the purity of the Element fire can give, making the sorcerer an outstanding fighter without recurring to his usual spells.

All of the following are class features of the Pyromancer.

Spellcasting: At every level, the HellFire Destroyer gain new spells per day and an increase in caster level (and spells known, if applicable) as if she had also gained a level in a arcane spellcasting class to which she belonged before adding the prestige class level. She does not, however, gain any other benefit a character of that class would have gained. If she had more than one arcane spellcasting class before becoming a Pyromancer, she must decide to which class to add each level for the purpose of determining spells per day, caster level, and spells known.

Air Blast (Sp): At level 1, the HellFire Destroyer can focus his magical energies into an high temperature air blast that knocks away whoever in a 30ft + 5ft/caster level radius. To avoid being thrown away by the air blast the enemy must succeed on a Reflex throw with DC: 10 + 1/2 caster level + relevant spellcasting stat modifier. Using this ability takes one standard action and can only be used every 2d4 rounds.

Molten Armor (Su): At level 3, 3/day, a HellFire Destroyer can encase himself a very resistant armor made out of dense Lava. Activating this ability takes a standard action, while deactivating it is a swift action. This gives him an Armor Class bonus equal to his class level (max +10). At the beginning of his turn each round he remains in the armor, the Hellfire Destroyer receives damage equal to the half of the Armor Bonus. This damage cannot be reduced or prevented in any way. The Armor does not give any penalty to casting spells, but it inflicts a -20 penalty on skill checks for swim and Jump. While partially or totally submerged in water, a Hellfire Destroyer must surpass a concentration check of DC: 15 + spell level. If the Hellfire Destroyer is unconscious, this ability deactivates automatically.

Gift of the Blessed Flame (Su): At level 5, the HellFire Destroyer can become harmlessly engulfed in flames to the ire of his opponents. Unarmed attacks, natural weapons, and armed atacks cause the attacker to take 1d6 fire damage.

Volcano (Su): At level 6, 1/day, the HellFire Destroyer can summon a small volcanic eruption. Standing with his feet in the soil, the the ability requires 2 rounds of concentration with one concentration check per round (DC 15). If he fails any checks, he can wait a further round and attempt another concentration check. The ability has a range of 100ft and a 15ft radius area. After at least two successful concentration checks, on the next round after the last check, a volcanic fissure will erupt dealing 1d12 x caster level to all creatures is inside the radius of the explosion. Reflex saving throw for half, DC 10 + Hellfire Destroyer level.

Spontaneous Combustion (Su): At level 7, a HellFire Destroyer can cause slain enemies to randomly explode. If an enemy is slain (reduced to -10 Hit Points) by the Hellfire Destroyer, that enemy instantly explode into gooey bits dealing 2d12 fire damage to all creatures in a 10ft radius. Reflex save DC 10 + 1/2 caster level + relevant caster modifier.

Incandescent Rain (Su): At level 8, 3/day, as a standard action, the HellFire can rain fire rain down over an area. With a range of 100ft, these flames rain down in 50ft radius dealing 1d12 damage for 1d6 rounds to all creatures caught in the effect each round on their turn. A Reflex save throw to negate the damage (Dc: 10 + 1/2 caster level + relevant casting modifier).

Hellfire Master (Su): At level 10, The Hellfire Destroyer becomes a Scion of Fire and is fully attuned to the source of Hellfire, the constant inferno of Hell. He gains Immunity to Fire and gains vulnerability to cold. The Hellfire Destroyer no longer can be healed by positive energy spells. In the presence of any fire damage, it heals him for half the damage. Also, any spell with the [Fire] descriptor has no caster level limit.

Combat: The HellFire destroyer possesses an high resistance which allows him to engage close quarter fights even without using spells, being a very versatile fighter, the HellFire Destroyer doesn't need to be protected or behind the rest of the group like other mages, instead he often takes the lead of an offensive action.

Advancement: A HellFire Destroyer will advance into another spellcasting class; one that may allow it to have more command over his area of effect spells or increase his caster level to squeeze more power out of fire spells. The Archmage is useful because of its Master of Shaping and Spell Power abilities.

Resources: The HellFire destroyer has a strict bond with the Fire Element, as it is the true source of his power he avoids being in cold or wet environments.

The HellFire Destroyer in the World[edit]

HellFire Destroyers bring the terror amongst the weaker, if not under control of a wise mind, such power is source of pain and sufferance for many.The gift of the HellFire is received by both forces of evil and good making people suspicious and afraid of such spellcasters. There are few many HellFire Destroyers on Earth and most of all prefer to live alone near , far away from other people.

NPC Reactions: HellFire destroyers are a rare kind of mages, in many parts of the world they remain unknown to common people, but wherever the memory is still present, they are feared.Other spellcasters usually mistake them for highly expert pyromancers.

Characters with ranks in Knowledge (Arcana) can research HellFire Destroyer to learn more about them. When a character makes a skill check, read or paraphrase the following, including information from lower DCs.

HellFire Destroyer in the Game[edit]

Pyromancers are casters who have an unhealthy obsession with fire. They can be from anywhere; but they also, like Cryomancers, can be from the frozen wastelands, using their fires to keep people hot, rather than using the cold. But, ultimately, pyromania is just inherent in a lot of people who want to see things burn!

Adaptation: Pyromancers may already exist; they are the blasters who love to set things alight, they want to watch the world burn, or they want to study the fires with delight. They are wherever mages are and they exist to blast.

Sample Encounter: Bargstaan Drior is a Half-Orc HellFire Destroyer who is exterminating the Village of Haldenburg near the Volcano Onocnatu.