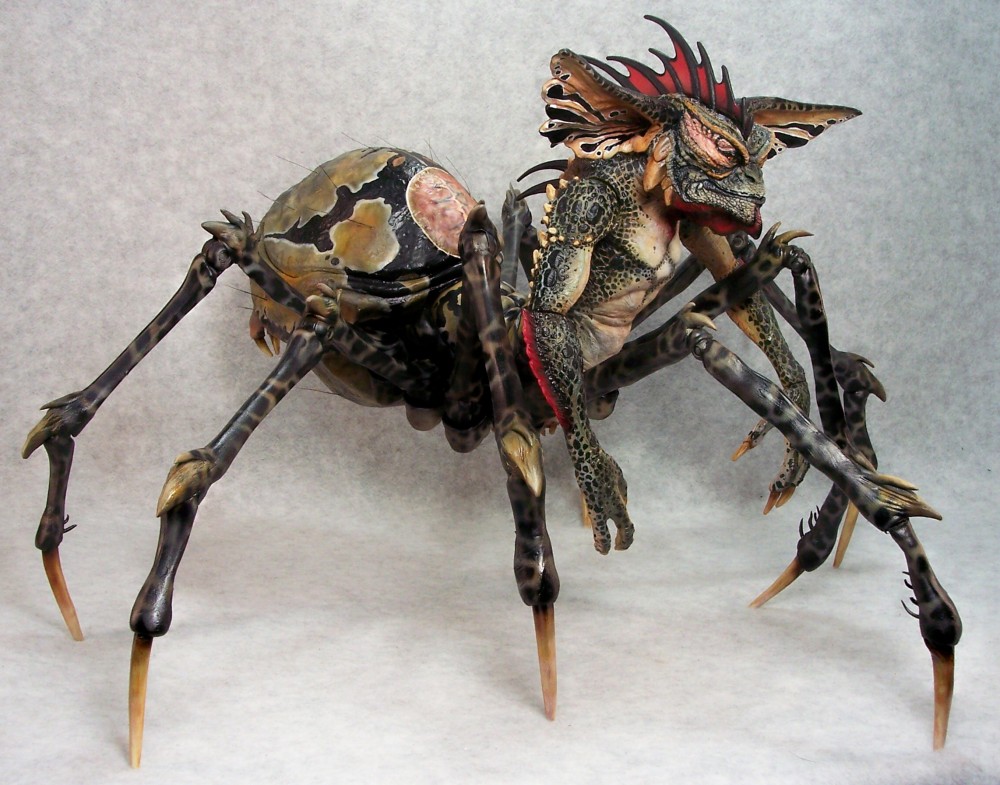 Gremlin Spider is similar to the Gremlin in almost every way except that is has the legs and abdimin of a spider. He uses these to his advantage, building web traps to ensnare their foes.

Gremlin Spider speak Grezzen. In order to speak any other language, they must spend 2 Skill points for each addition language they wish to speak.

A Gremlin Spider's only desire is to be happy; they have very little in terms of possessions and have no material needs.

Web (Ex): Gremlin Spiders use their webs in caves and rooms to ensnare their pray and to lower themselves silently on silk strands and leap onto prey passing beneath. A single strand is strong enough to support the gremlin spider and one creature of the same size. They can throw a web eight times per day. This is similar to an attack with a net but has a maximum range of 50 feet, with a range increment of 10 feet, and is effective against targets up to one size category larger than the gremlin spider. An entangled creature can escape with a successful Escape Artist check or burst it with a Strength check. Both are standard actions whose DCs are given in the table below. The check DCs are Constitution-based, and the Strength check DC includes a +4 racial bonus.

Gremlin Spiders often create sheets of sticky webbing from 5 to 20 feet square, depending on the seroundings. They usually position these sheets to snare flying creatures but can also try to trap prey on the ground. Approaching creatures must succeed on a DC 20 Spot check to notice a web; otherwise they stumble into it and become trapped as though by a successful web attack. Attempts to escape or burst the webbing gain a +5 bonus if the trapped creature has something to walk on or grab while pulling free. Each 5-foot section has the hit points given on the table, and sheet webs have damage reduction 5/—.

A gremlin spider can move across its own web at its climb speed and can pinpoint the location of any creature touching its web.

Light Sensitivity (Ex): Gremlin Spiders are dazzled in bright sunlight or within the radius of a daylight spell.

Vulnerability to Sunlight (Ex): Gremlin Spider loathe sunlight, for its merest touch burns their flesh. Each round of exposure to the direct rays of the sun deals 4 point of damage to the creature.

Dark Spawn(Ex): When a Gremlin Spider gets wet from water, they produce 2d4 Dark Spawn. They are evil spawn that pop out of the Gremlin Spider's back as small balls of slime. It take 2 rounds for the Dark Spawn to take full form. Gremlin Spider only care about their own entertainment especially at the cost of others including their own kind. However, Gremlin Spiders will use this to their advantage when they believe that it is their only hope to survive.

Genetic Instability(Ex):Gremlin Spider was created with the introduction of Spider Flesh into a Gremlin's body. Another Creation was the Gremlin bat.

Gremlin Spider prefer to ambush creatures in their webs and move in to entangle them quickly. When they feel threatened, they retreat until a more favorable situation presents itself.

Gremlin Spider as an Improved Familiar[edit]