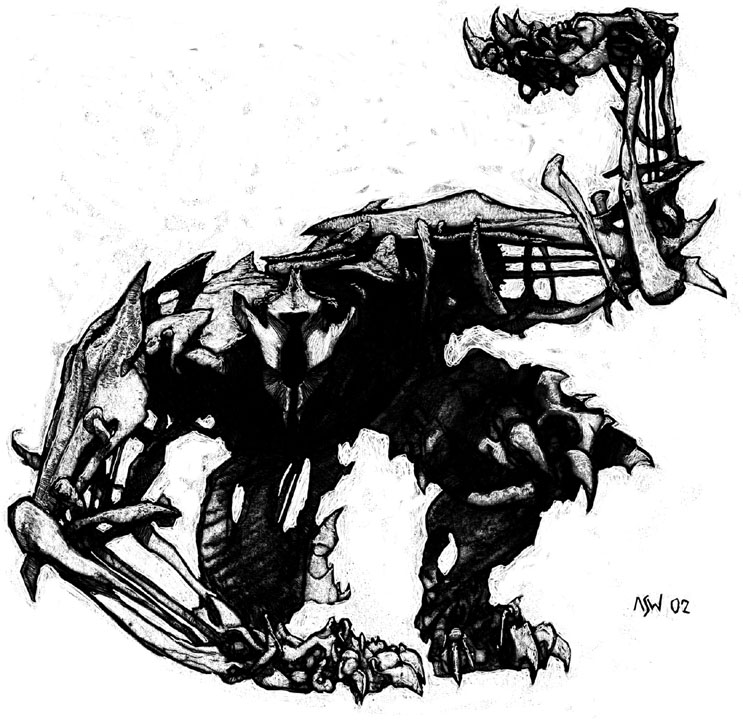 The air is still and cold, and a constant dripping echoes through the room. They're awfully thick footsteps, and a smell that tears at your insides, then there it is, right in front of you, a dripping form of rot and filth, looking straight at you.

A greater dreg golem is a more dangerous version of a dreg golem which is likewise made of rust, rot, and other repulsive materials. The greatest advantage they have is the fact that they produce a horrid stench that few creatures can bare to breathe in. Liches or other various, intelligent, horrible creatures may keep a greater dreg golem in their possession, protecting something of value to them.

Dreg golems are mindless fighting machines, merely doing what their creators tell them to do, nothing else. Dreg golems have no strategy in combat, just charge and kill, making them easily outsmarted in battle.

Immunity to Magic (Ex): A greater dreg golem is immune to any spell or spell-like ability that allows spell resistance, except as follows. An acid effect restores 1 hit point to the dreg golem for each 3 points of damage it would otherwise deal, additionally, spells with the fire descriptor have a 20% chance of dealing damage normally.

A greater dreg golem’s body is a compilation of various, repulsive substances, such as rust or rot, having a total weight of at least 6,000 pounds. These materials must be of around the same consistency, and may cost anywhere from 4,000gp to 5,000gp. Assembling the body requires a DC 18 Craft (alchemy) check.