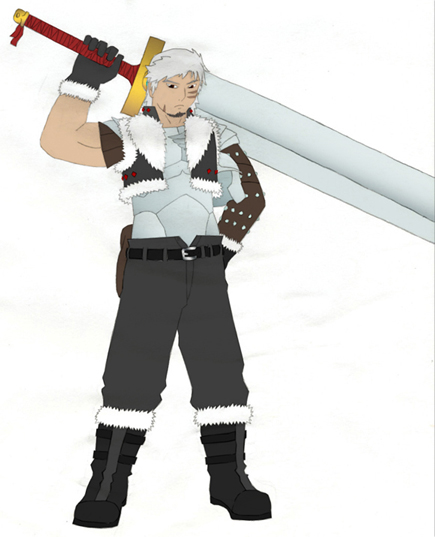 A great swordsman is a specialist in wielding swords of larger size. They grip the hilt of their blades firmly in both hands and spend much time perfecting their swordsmanship to the highest degree. They maximize the power and accuracy of every slice made with their sword and fortify their abilities in using their blade to its fullest in combat, no matter what the situation. They are a class dedicated to the sword as being their ultimate weapon, no matter for what purpose they wield it.

Warriors who specialize in wielding a sword with two hands most certainly favor this class because it allows them to train specifically what is needed to optimize their capabilities with their blade. The constant training and focus of a great swordsman attracts those with the blood of a true warrior and a love for the sword wishing to hone their skills on the battlefield. However, the path requires focus and determination, as well as some natural talent. Fighters are the most likely to become Great Swordsman, but Barbarians, Paladins, and other warrior classes are just as capable. It is possible for other classes as well, but the path will be more difficult and perhaps not as rewarding. For a great swordsman, high Strength and Dexterity are important for wielding the sword in the manner that they do as well as for allowing them full bonuses when wearing the light and medium armor necessary for them to maintain their abilities in combat. Intelligence is also very important for a Great Swordsman to make up for the low skill points gained from their class when compared to their number of class skills as well as for their Intuitive Strike later on. Constitution is ever important for a warrior of the front lines and wisdom is useful for a couple of the Great Swordsman's class skills, though Charisma can also be useful in Intimidation.

All of the following are class features of the Great Swordsman.

Fencing: A Great Swordsman does not only use his sword as a weapon for killing others, but for protecting himself. As such, he knows well how to use his sword defensively to parry enemy attacks. At the first level, he gains a +1 shield bonus to his Armor Class when wielding only a sword in two hands without a shield of any kind. This bonus increases to +2 at level 5, and +3 at level 9.

Enhanced Tools of War: At 1st level and every three levels beyond (4th, 7th, 10th, etc), a Great Swordsman gains a cumulative +1 enhancement bonus to his armor and weapons as if it were enhanced by magic. However this is an extraordinary effect, a result of his expertise with whatever armor he wears or weapons he employs. It does not stack with the enhancement bonus from other sources, though he can still benefit from the other effects of magic armor and weapons. If the fighter elite uses a shield, the bonus applies to the shield AC as well.

Great Sword-Finesse: A great swordsman knows that it takes strength as well as finesse in order to properly wield a sword. When wielding a sword with two hands without a shield of any kind and with only light or medium armor and when unencumbered, he adds half his Dexterity bonus rounded down as well as his Strength bonus to his attack rolls.

Uncanny Dodge: At 4th level, a great swordsman gains the ability to react to danger before his senses would normally allow him to do so. He retains his Dexterity bonus to AC even if he is caught flat-footed or struck by an invisible attacker. However, he still loses his Dexterity bonus to AC if immobilized. If a great swordsman already has uncanny dodge from a different class, he automatically gains improved uncanny dodge (see below) instead.

Improved Uncanny Dodge: At 6th level and higher, a great swordsman can no longer be flanked; he reacts to opponents on opposite sides of him as easily as he can react to a single attacker. This defense denies a rogue the ability to sneak attack the great swordsman by flanking him, unless the attacker has at least four more rogue levels than the target has great swordsman levels. If a character already has uncanny dodge (see above) from a second class, the character automatically gains improved uncanny dodge instead, and the levels from the classes that grant uncanny dodge stack to determine the minimum level a rogue must be to flank the character.

Great Sword-Power: When wielding a sword with two hands without a shield of any kind and with only light or medium armor and when unencumbered, a great swordsman adds twice his Strength bonus (rather than his Strength bonus and a half) to his damage rolls.

Intuitive Strike: 3/day a great swordsman can use the True Strike spell as a swift action before an attack roll.

Honing Critical: When in battle, a great swordsman never loses his focus and when he sees the opportunity for an effective strike, he takes it. At 10th level, a great swordsman adds a bonus equal to half of his ranks in sense motive (rounded down) to confirming a critical.

All of the following are class features of the Great Swordsman when advancing into Epic levels.

Combat: A Great Swordsman makes an effective combatant on the front lines. He is capable of taking damage and especially capable of dishing it out to his enemies. And even when the party's sorcerer runs out of spells for the day, the Great Swordsman can keep on attacking endlessly into the night; provided he doesn't get fatigued from doing so. Regardless, he makes an effective countermeasure against other warrior type classes, whether taking on one enemy in a closed duel or multiple enemies on the battlefield.

Advancement: Feats from the complete warrior, especially Monkey Grip and other feats like Power Attack help this class to advance greatly. Multiclassing with a fighter, barbarian, or even paladin (in certain scenarios) class might yield some progress, but Great Swordsmen often do well as a single class once they get beyond their original class, that is.

Resources: When Great Swordsmen encounter each other, their first reaction is often a friendly one. Great Swordsmen have mutual respect for each other as brothers of the same art. However, they often wish to see whose abilities are greater and will battle with one another, though not to the death, in semi-sporting duels. That is, unless the other Great Swordsman isn't of an opposing good/evil alignment. Should a Good Great Swordsman and an Evil aligned Great Swordsman clash, the battle will most likely be a fierce, unrelenting fight to the death in order to extinguish a potentially fatal possible future foe. But even so; the enemy of my enemy is my friend and if need be, even good and evil Great Swordsman will set aside their differences to fight a common enemy.

Great Swordsmen in the World[edit]

Great Swordsmen fit into many places that a fighter would. However, because he is dedicated to his own training and further advancement and specializes in using the sword alone as preferred to any other weapon, they are more likely to adventure for their own personal reasons or interests than a fighter is.

NPC Reactions: At first, not many people pay attention to a Great Swordsman lest the blade he carries around is anything particularly out of the ordinary, such as the huge sized Katana wielded by Rid Aestharin that often widened the eyes of many who saw it. Otherwise, the moment one of these masters of the blade draws their weapon, all eyes will be in awe of their incredible ability in wielding their blade.

Characters with ranks in Knowledge (Local) can research Great Swordsmen to learn more about them. When a character makes a skill check, read or paraphrase the following, including information from lower DCs.