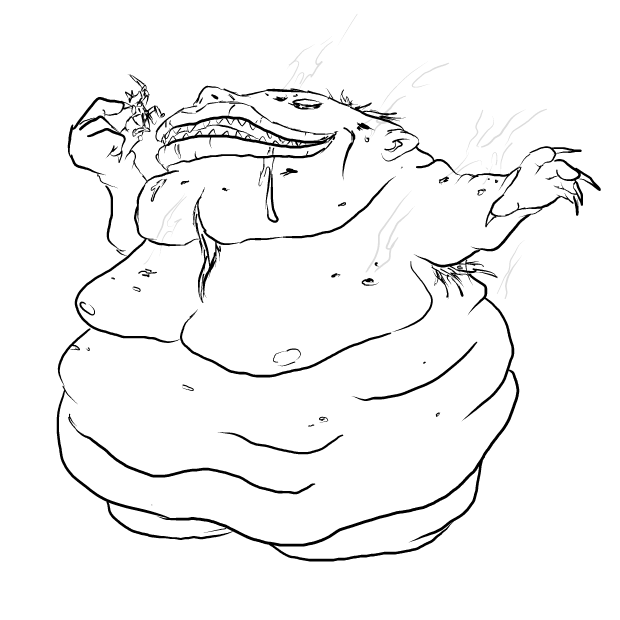 The Great Mon Gorge is what they call this god. Given immortality by Lady Nocrat his mind has long since been consumed by the body venerated today. When the Lady was approached by a representative of a local Baron that had discovered her secret she was furious, however she accepted an offer to meet the Baron, with the intention of killing him upon arrive. When she met the Baron she was taken aback by the girth of the man before her, the Lady was convinced (through no small part of the bribe she received) that the barons goal was to simply expand his diet into a more fertile source. Being known as a glutton it wasn't a stretch. The Lady turned the Baron night and he immediately fled the confines of his bed, which due to his weight he was not able to leave for some years. He fled into the night eating every mortal soul he came across, his hunger even drove him to eat during the day, his massive girth burning in the sun, there was just far too much tissue for the sun to burn him to death. One day the behemoth found a fertile stretch of farms, and spend weeks rolling back and forth between them, until a gorge was formed from his massive rolling, a gorge he can still not escape to this day.

The temples to The Great Mon Gorge are not existent, reverence is given to him when eating, though he does have clerics who worship him, the land around the gorge itself are mostly a theocracy ruled by his followers, non-believers are captured and brought to the gorge for The Gorge to feed off of.

As a huge, seventy foot, ball of fat rolling and eating.