Based on the rock people from the Legend of ZeldaTM series. 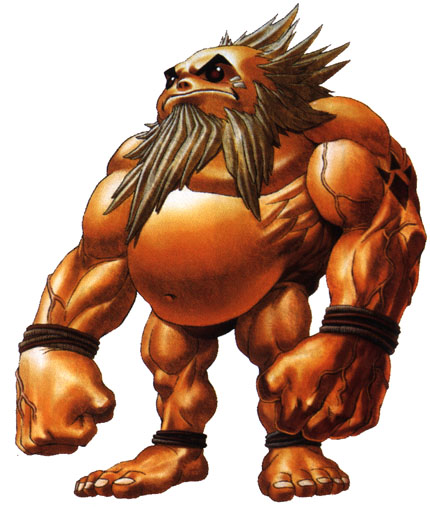 Gorons are extremely bulky, rocklike brutes (see picture). They stand between 6'8" and 8'4" and weigh between 580 and 2,800 lbs. Most have long arms that reach down to their knees, possibly even lower. Their backs are covered in a layer of chitin resembling the face of a boulder. Hair is uncommon, and generally only seen on patriarchs in the form of intimidating manes and beards. Their eyes resemble dark-coloured gemstones. Unlike humans, Gorons lack external hearing organs; like reptiles, Gorons' ears are simply holes at the sides of their heads. A goron's skin color ranges from charred brown to light beige, and sometimes has a reddish tinge.

Despite their intimidating and brutish appearance, Gorons are generally a very friendly race--almost to a fault. They enjoy sports, particularly those that have an emphasis on strength and determination, such as sumo-wrestling. Often, disputes between gorons will be settled by such a sport of strength. Gorons are natural-born smiths and craftsmen, and love to build structures, weapons, explosives, and mechanical contraptions in their spare time. Gorons are generally extremely loyal to friends and family--the concept of "brotherhood", both in a literal and metaphorical sense, is very important to them. Aside from immediate family, Gorons give the label of "brother/sister" to anyone who hails from the same tribe, helps the tribe in a significant way, fights by their side in battle, or saves their life.

Common personality flaws among Gorons include laziness, short attention spans, childish gullibility, and a generally overbearing nature--even when being friendly, they come off as being too friendly, such that other races can find them slightly annoying. They also tend to forget that other races aren't as strong or as heavy as they, leading to humorous situations such as a Goron giving an elf a congratulatory pat on the back and accidentally knocking him or her down. Despite their normally very friendly and peaceful nature, a few Goron elders, in times of great difficulty for the tribe, have been known to refuse aid from other races due to their own immense pride, even ordering the tribe to attack well-meaning visitors rather than permit them to assist. This "pride flaw" is not common, and most Gorons are usually more than willing to ask people of other races for help when necessary.

Gorons are mostly peaceful and try to avoid battle unless it is necessary. However, when battle is necessary, they do not hesitate to answer the call. They have a strong sense of martial pride and honor--they're the type that would always give their opponent time to ready him or herself, and they tend to abhor sneaky and underhanded tactics. Goron tribes rarely have a standing military--instead, each individual goron, regardless of occupation, is trained to be a capable warrior in his own right. Goron cities usually employ a regular unit of guards, however.

Gorons have a patriarchal, tribal society, led by the strongest and most charismatic alpha male, who is often assisted by a council of elders in running the tribe. Goron tribes dig their cities in caves or mountainsides. The tribe has a great emphasis on community and brotherhood, with each individual goron working towards the good and protection of the whole. For leisure, Gorons enjoy music and dance, rolling/racing, games, sumo wrestling, and bathing in hot springs. Most gorons take on occupations such as crafting, blacksmithing, sculpting, demolition, and merchantry.

The peaceful Gorons tend to get along quite well with most other races. Like the dwarves, Gorons are widely respected for their craftsmanship. Goron artisans and merchants love to show off their work, particularly when it comes to explosives. Outside of trade, however, goron tribes tend to be somewhat seclusive, although they will generally welcome members of non-hostile races into their cities.

Gorons like to live in volcanic mountain chains and caverns, generally within temperate climates. Once a suitable region is found, a goron tribe will dig a cavernous city within the mountain.

Religion doesn't have much influence in Goron culture. Most goron tribes practice religious tolerance, except for evil deities. Many tribes practice ancestral woship, believing that the spirits of their ancestors will watch over and protect them. Otherwise, a goron will worship just about any deity that matches his alignment, but in any case, religion is not a major part of their lives.

Gorons speak Common and Terran--it's said that their ancestors were descended from the earth spirits. They also tend to pick up the languages of other mountain-dwelling races.

A goron child is usually named by his father. Many name their children after an honored ancestor (see Religion, above). Additionally, gorons will often name their children after individuals that have earned the respect of the tribe, regardless of that individual's race. This can lead to a single tribe having a mix of goron, human, dwarven, gnomish, and even elven names. There are no "last names" in the traditional sense--the entire tribe is considered to be "brothers" and "sisters", and so a goron simply uses the name of his tribe in place of where other races would use a last name.