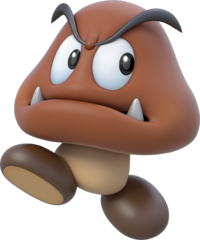 Goombas or the chestnut people are brown mushroom-like creatures with dark brown legs. They have bushy, black eyebrows and a pair of fangs sprouting from their lower jaw. They never use their fangs, though. They headbutt into an enemy to hurt them. Goombas are naturally peaceful creatures that love to wander through the nature and odd places of the Mushroom Kingdom. However, they are not the smartest creatures and often find themselves in troublesome scenarios.

Racial Traits: +2 Str, -2 Int; Small Sized; Goomba Tactics - all goomba gain +2 to attack against enemies with an ally adjacent to them; 30 ft base land speed; starting languages common and goomba.

Abilities: The most important abilities for a Goomba are Str and Con because they are typically frontline fighters. Dex can also be useful in increasing their reactions in battle and ability to dodge attacks.

Alignment: Goombas can be any alignment.

Weapon Proficiency: Goombas are not proficient with any weapons and only use their head and occasionally feet as means of attack.

Headbutt: Goombas gained the Improved Unarmed Strike when attacking via their head. It does bludgeoning damage.

Spiked Helmet: Goombas' headbutts now do piercing damage and have a crit range of (18-20) and X3 multiplier.

Fast Movement: Goombas are surprisingly nimble creatures and through vigorous training get faster over time. Their base speed increases by 10ft at 4th level, another +5ft at 8th, and a final +5ft at 12th.

Goomba Sprout: Starting at level 5, Goombas can bud off a tiny basic clone of themselves. This Sprout works like a companion and is completely controlled by the parent Goomba. They are tiny in size, 20ft base speed, have half HP of parent, half Defense bonus of parent, share BAB of parent, does d4 headbutt damage, shares skills of parent, shares saves of parent. Goombas can Sprout additional clones increasing every 4 levels. If a Sprout dies, it takes a Goomba 24 hours to bud a replacement.

Grow Wings: Goombas sprout wings at level 6. These are awkward to begin with for a Goomba. They give +5 bonus to an Athletic check when attempting a jump and allow Goombas to glide.

Snap kick: Goombas learn to throw in an extra kick when they full-attack. During a Full Attack, Goombas get an extra attack at their highest BAB -2.

Improved Goomba Tactics: Goombas and their allies count as flanking an enemy as long as one Goomba and one ally are adjacent to the same enemy. This does not apply when an enemy is larger than 2 sizes above a Goomba.

Gold Goomba: Goombas can turn gold for 10 mins for a number of time per day equal to their Cha mod. When a Goomba turns gold, they gain a +5 to natural armor, +6 Str and Con, but take -20ft to base speed and cannot fly while gold.

Natural Fliers: Goombas have become so used to their wings they fly as naturally as birds. Fly speed 50ft (good).

Bones Goomba: The Dry Bones version of a Goomba Sprout. Immune to physical attacks but only has 1/4 parent's hp.

Gu Goombas: These green sprouts have 18 Str, but only 20ft speed, and only 1/4 defense bonus.

Gloombas: These dark blue sprouts only do d4 damage but have the same hp and defense bonus that their parent has.

Roombas: 10% chance that when sprouting a new clone, a Roomba will be made. These clones are useless, don't listen to the parent, can get stuck walking in circles and have an overwhelming compulsion to clean dirty areas.