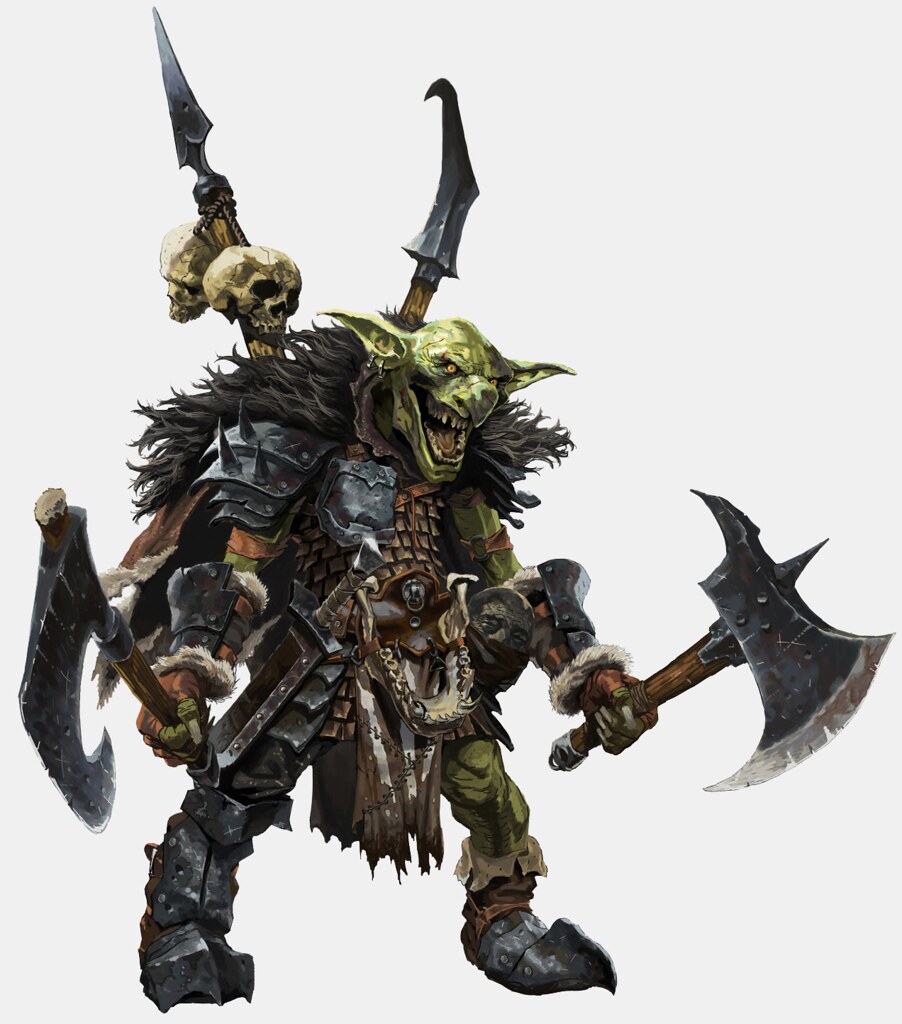 'A sneaky and conniving race, they prefer subversion and subterfuge as opposed to raw brute force to accomplish their goals.

Goblin's are a sneaky conniving race, often times associated with more nefarious entities and Gods, and working closely with many criminal elements. Despite this not all Goblins behave in these manners, as the race is not inherently evil or immoral. Goblins are best known outside their underground homes as merchants and traders, with a heavy emphasis on economy and free trade. Goblins value cunning, skill, stealth, speed and money, although not all Goblin's share the same values. Goblins are often shrewd and calculating, and can live slightly longer than most humans, up to 125 years. They live much longer than Orcs, whom they are closely related too, and generally have pale grey or green skin. As they spend most of their lives underground, they have phenomenal vision, and can see in absolute darkness. Despite being slightly smaller than humans, they are frequently employed as soldiers, and make good mercenaries or warriors. Goblins have an intense emphasis on economy and trade, but they are not necessarily greedy, although many are. Goblin heroes are generally those willing to wander out of the harsh and dank conditions of the mines their race is known for, and willing to venture out in to the rest of the world.

Goblin's make good barbarians, rogues, rangers, and fighters, due to Dexterity and Strength. However, they also make good sorcerers and warlocks due to Charisma and Dexterity, and can function as bard's, ardent's and even paladins.

Play a Goblin if you want...

Goblins resemble humanoid figures, and are very similar in appearance to Orcs. They normally appear to be a shade of green or grey, but some are known to vary wildly in many different colors, such as black or red. They are slightly smaller than the average human, and live longer, to approximately 125 on average, compared to humans at 75. They remain fit and healthy for most of their lives, but age quickly right before their death. Despite their apparent crude and brash nature, many Goblins are very shrewd, possessing a degree of intelligence and natural bureaucratic and accounting skills. While not known for being particularly intelligent, they are known for their sneaky, clever and cunning ways, as they prefer subversion and subterfuge compared to raw brute force. As they live almost entirely underground, Goblins are not well known by other races and rarely interact with them (save for the drow and other races of the Underdark), but despite this are a surprisingly well off race with a bustling economy. Part of this is due to the high presence of gold and other valuable minerals within the mines they make their homes in.

Goblins are well known as traders and merchants, being heavily invested in commercial and economic activities, boasting a tremendous amount of wealth relative to other races. While Goblins are not greedy per say, their emphasis on clerical skills, economy and their shrewdness can be off putting to other races not accustomed to their ways. Unfortunately many goblin societies associate with more nefarious types, and engage in many unsavory practices, such as slavery, gambling and mercenary work. While they are not as barbaric or cruel as many other races, such as Orcs, showing more compassion and pity to their victims, they still nonetheless have a tendency to associate with more malicious entities and often worship dark gods. This is not the rule for the race, however, who despite their association with criminal and violent types, are not inherently evil or immoral as a race.

While only slightly smaller than the average human, their inherent flexibility and surprising speed gives them the ability to maneuver around most obstacles without much difficulty. Goblins are closely related to Orcs, and share the same general appearance, with similar skeletal and facial structures, as well as skin color and typical features present in both races (such as the heavily calloused skin and tusks). Despite this, they lack the size and strength of most Orcs, but are much more agile. Goblins, Orcs, and Drow generally coexist well, with Goblins getting along well with all those that live underground. Their calmer demeanor and smaller size tends to separate themselves from Orcs, as well as their emphasis on speed and cleverness over raw strength.

When your Goblin character gains a class utility power after 1st level, you can forgo taking a power granted to you by your class. Instead you gain an Goblin utility power of the same level or lower.

The race is slightly different than many found in other sources, more similar to the Lord of the Rings goblin given their inherent similarity to Orcs.